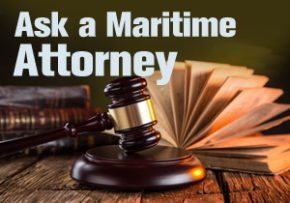 I am a boat mechanic with a shop in Southern California. I did a lot of work on a boat recently, but before the job was finished a creditor filed a lawsuit in Federal Court in Los Angeles and the U.S. Marshals arrested the boat. I have learned the creditor is a shipyard in British Columbia and they filed the lawsuit to collect on an unpaid bill for work done in their yard last year. Where does this leave me? Could I make a claim in the lawsuit? If the boat is sold at auction will I be paid? Is a lien for work completed in Canada valid in the United States?

All very good questions, and I will try to answer them without dragging everyone into a law school class on maritime liens.

Let’s start with the definition of a lien. A lien is a form of security interest granted over an item of property to secure the payment of a debt or other claim. A maritime lien arises when the property in question is a boat, but the laws that govern the enforcement of a maritime lien may vary considerably depending on where in the world the boat is located.

Maritime liens may arise from many different sources, including crew wages, salvage, and a long list of other services. The liens that are most familiar to recreational boat owners include their mortgage and claims for services rendered, such as mechanical repairs, shipyard work, and slip rental. A lien for these types of services rendered is known as a lien for “necessaries,” and this is one area where U.S. law differs substantially from the rest of the world.

In this country, a lien for necessaries will be a senior claim against the boat if it arises prior to the recording of a mortgage. This is important because the mortgage may otherwise consume all of the owner’s equity in the boat. Even where a lien for necessaries arises after the mortgage, it is a valid lien that may be enforced through a federal court procedure to arrest the boat. And, unless the boat is sold through the federal court procedure, the lien will stay with the boat after it is sold, even if the buyer has no notice of the existence of the lien.

Other countries are not so generous. For example, in Canada and the United Kingdom, a lien for necessaries is valid only while the lien holder has possession of the boat.  It is always subordinate to a mortgage, regardless of when it arose, and it is automatically extinguished upon the sale of the boat, regardless of how the boat is sold.

Looking at our reader’s case, the boat was arrested pursuant to a federal court order in a lawsuit filed in California by a Canadian shipyard. Under Canadian law, the yard would have lost its lien when they gave up possession of the boat. But the validity of maritime liens and priorities among competing creditors are determined by applying the law of the jurisdiction where the foreclosure action is brought. In this case the foreclosure action was filed in a Federal Court in California, so the claims are evaluated under U.S. maritime law. Our reader and the Canadian shipyard both appear to have valid maritime liens for necessaries, but our reader cannot pursue his claim until he becomes a part of the lawsuit. Our next step is therefore to get him a seat at the table.

Competing creditors may each pursue their claims in a lien foreclosure lawsuit filed by one creditor, but only after the additional creditors formally enter the lawsuit by filing a “complaint in intervention.” The process is complicated when the claims exceed the value of the boat, since it will require the creditors to fight among themselves over the sale proceeds, if and when the court orders the sale of the boat. This requires us to determine the priority of the liens claimed by each of the competing creditors.

After a Marshal’s auction, the Court will only distribute money to lienholders that make a formal appearance as an intervening plaintiff, after ruling on the validity and priority of each competing claim. Priority is determined based upon a complicated set of rules that consider the type of claim (for example, a lien for unpaid crew wages will be superior to a lien for an unpaid shipyard bill), and upon the timing of the claim (when was the work performed?). When the claim is for the same type of service, such as in this case where both claims involve the providing of “necessaries,” and the respective vendors completed their work within a year, the liens are considered to be substantially equal and the sale proceeds are distributed on a pro-rata basis according to the size of each claim.

It should be apparent from this discussion that the enforcement of a maritime lien is never a simple exercise, and the process may be further complicated when competing creditors are pursuing the same boat. In the case described above, our reader needs to spend the money to enter the lawsuit or he will lose his lien when the Marshals sell the boat. But he will first need to hire an experienced maritime attorney to sort things out.

David Weil is the managing attorney at Weil & Associates (www.weilmaritime.com) in Seal Beach. He is an adjunct professor of Admiralty Law, a member of the Maritime Law Association of the United States and is former legal counsel to the California Yacht Brokers Association. If you have a maritime law question for Weil, he can be contacted at 562-799-5508 or at dweil@weilmaritime.com.