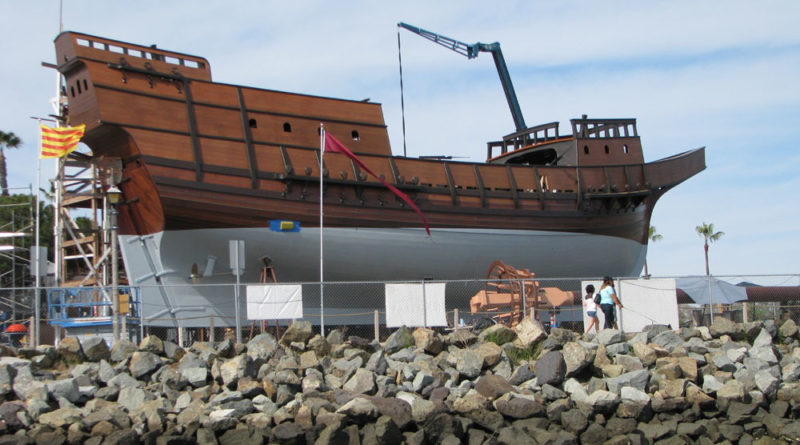 What Happened: A pre-trial hearing for Brian Cleveland Dunn, a county contractor accused of misappropriating funds while operating out of Dana Point Harbor, was rescheduled for June 5. It is the fourth time since Dunn’s pre-trial hearing was moved to a new date since his arraignment in November 2014.

The court rescheduled Dunn’s pretrial date during a May 8 hearing. Dunn’s first court appearance was Nov. 3, 2014. He has since been scheduled for a pre-trial hearing at Orange County Superior Court on Nov. 20, 2014, Jan. 29, March 13 and May 8.

What’s On Tap: Dunn, 61, is scheduled to appear in Department C55 at the Orange County Superior Court’s Central Branch in Santa Ana for a pre-trial hearing on June 5 at 8:30 a.m.

What Happened: Cheyenne owner Chris Welsh emailed his latest update to Newport Beach’s harbor commissioners, stating the underwater craft’s glass dome could be shipped to San Francisco as early as June 2 to be attached with the rest of the one-man vessel. Welsh would occupy the underwater craft to explore the deepest depths of the ocean.

What’s On Tap: Welsh told commissioners via email if the dome is indeed ready to be installed next month, the vessel would be tested in Pennsylvania then put together in a final assembly before officially being placed into the water. The entire process would require up to five months to complete, Welsh stated in his May 7 email. Accordingly, the earliest Cheyenne would be ready is October.

The commission did not provide any commentary on Welsh’s May update.

What Happened: The Fish and Wildlife Service announced May 6 it will revise rules for its Boating Infrastructure Grant (BIG) program; the announcement was made in the Federal Register.

States and territories use BIG funds in order to provide recreational boats 26 feet long and longer with a temporary harbor. The funds would pay for boat slips, dredging, floating docks, navigational aids and piers.

Under the new rules, any state or territory seeking BIG funding can only ask for up to $200,000 for dredging. A transient vessel can stay in the same temporary harbor location for up to 15 days, or five days more than was proposed.

Several other technical changes were made, as well. For the complete list of rule changes, view the final rule at https://goo.gl/AArzEj

Lisa E. Van Alstyne of the Fish and Wildlife Service’s Wildlife & Sport Fish Restoration Program can be contacted for questions at (703) 358-1942.

What’s On Tap: The new rules will go in effect June 5.

Boat hoist at Redondo Beach Marina to reopen in summer

What Happened:  The two public boat hoists near Mole D in Redondo Beach Marina were closed for repairs for most of 2015. Redondo Beach’s City Council approved a $242,000 contract to complete work on the public hoists. Construction and renovation is expected to be complete within 10 weeks.

“The boat hoists are located within Harbor Basin III and allow for the transfer of larger craft from land to water and back. This is the only boat hoist facility located within King Harbor,” according to a recent staff report.

City staff added the hoists were used 1,225 times in 2013, with about half of the uses occurring between May and September. Each hoist is capable of lifting a 5 ton, 30-foot craft.

What’s On Tap: Redondo Beach predicts construction to be completed within 10 weeks. Assuming construction is completed as scheduled, the hoists could be open as soon as mid-July.

Shellmaker still strategizing how to lift barge from harbor

What Happened: A Shellmaker representative appeared in front of the Newport Beach Harbor Commission on May 13 to address its efforts to lift its barge, Gemini, from the floor of the bay. Shellmaker has already invested $40,000 in attempting to lift and remove the barge.

Shellmaker. The company hoped to recover some of its money back by selling Gemini for scraps. However, Gemini’s scraps were valued at $6,000, according to Ormerod.

According to city staff, everything was stripped from the scow before it became fully submerged; only the shell of the barge is underwater.

Gemini became submerged in July 2013; the barge’s owners did not have insurance on Gemini when she sank. State grants for derelict boats are not available to bring Gemini up to the water’s surface; the scow is a commercial vessel and the state’s grants are only available to recreational boaters.

What’s On Tap: Ormerod said the company hopes to begin working on lifting Gemini in June. He added the company plans to cut Gemini into pieces and hopes the city of Newport Beach will help Shellmaker remove those pieces when some lifting equipment arrives in the harbor to complete Marina Park.

How much it would cost to remove Gemini from the harbor floor is uncertain. One firm reportedly gave Shellmaker a $100,000 quote without any guarantees it would successfully remove the scow from the harbor.

“The [catamaran] is longer and wider than the barge and could help by minimizing the amount of cutting necessary to get pieces of the barge out,” Welsh wrote in an email to harbor commissioners. “We also gave [Shellmaker] several sources for buoyancy solutions. Much like our previous work removing the whale carcass in San Diego, the [catamaran] has unusual capabilities.”

What Happened: The Marriott Marquis at San Diego Bay announced it expects to begin work on its marina renovations in June and would take three to four months to complete. Ground was broken in March for the hotel’s entire expansion.

What’s On Tap: Marina staff said the renovation project would require boats to be relocated. A newsletter issued by the hotel stated work would be split into two phases and docks would have to be emptied during work. The marina will no longer allow boat hoists once the renovation is complete. The Log will provide greater details of planned construction in June.