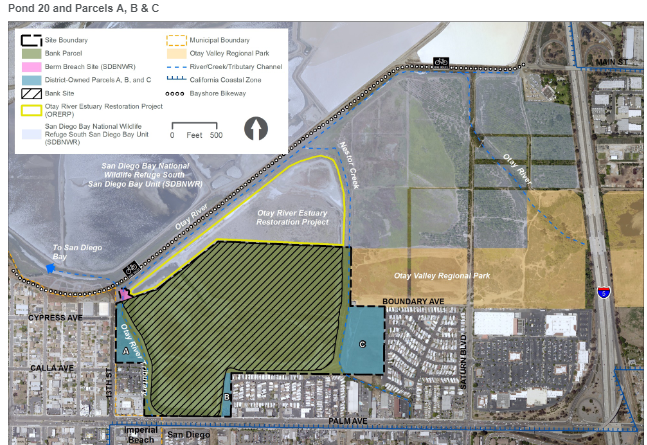 What Happened: The Log covered a March 9 approval of a Memorandum of Understanding between the Port of San Diego, U.S. Fish and Wildlife Service San Diego National Wildlife Refuge Complex, and Poseidon Resource to coordinate on the restoration of South San Diego Bay Wetlands, including Pond 20. Pond 20 is the site of a proposed wetland mitigation bank project from the Port of San Diego that was awaiting approval of an Environmental Impact Report before it could move forward with licensing and construction. The Wetland Mitigation Bank at Pond 20 is a proposed project that will remove 550,000 cubic yards of material to create a wetlands habitat. The project will bring in water through the main tidal channel and create high, mid, and low marshes. The proposal will also create transitional habitat on the top of the berms for high tides. The port purchased the land in 1998 as part of a larger 1,400-acre parcel. The land was transferred to the state which led to the creation of the South San Diego Bay National Wildlife Refuge as part of the mitigation requirements for the San Diego International Airport Terminal 2 expansion. The port retained ownership of the land after the San Diego County Regional Airport Authority separated from the port. The port’s intent for the site was potential commercial development but after a series of proposals and public outreach efforts, the overwhelming majority of people wanted some type of open space. “An overwhelming majority of people said they wanted open space out there and wetland restoration and mitigation banking seemed to be a logical choice for something to do on the parcel,” said Eileen Maher director of environmental conservation for the Port of San Diego in a previous interview with the Log.

What’s on Tap: The mitigation bank project got the two approvals it needs to move on to the California Coastal Commission for consideration. At the April 13 Board of Port Commissioners meeting, the board certified the Environmental Impact Report for the proposed project and approved a Port Master Plan Amendment that would add the parcel and the project into the port’s coastal jurisdiction. If it goes through and permits are obtained, construction could start as early as spring 2022 and be completed by 2023, according to an April 19 press release from the Port of San Diego.