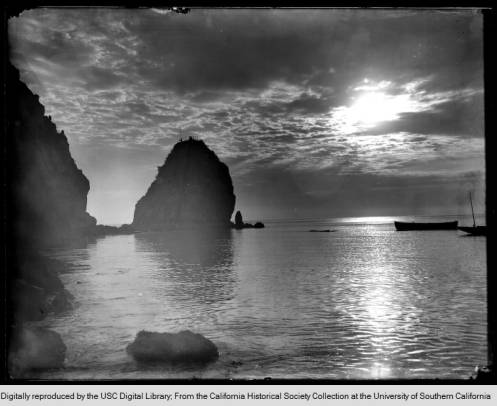 AVALON — While we have witnesses many interesting buildings and a tourism industry build up within Avalon’s city limits during the past100 years, it is hard to imagine Catalina’s Island’s most famous harbor without one of its most impressive tourist attractions and venues: Catalina Casino. However, there had to be something there before the stunning Art Deco building was established in 1929, right? The answer is there was – a rock formation named Sugarloaf.

At one time, the standalone rock was considered a recognizable feature of the bay before it was bought by the Wrigleys. Its unusual name came from its conical shape, which was similar to molds that refined sugar was packed into during earlier centuries and by sailors who thought that it resembled Mt. Sugarloaf in Brazil.

A staircase was built to climb Sugarloaf during the 1890s, but it was deemed quite a dangerous climb with many tourists fearful of the downward descent after they conquered Sugarloaf. Children in town would often charge climbers a fee to help them get down from the rock.

When the Wrigleys bought Catalina Island, Sugarloaf’s days were numbered and the site was cleared with dynamite to make way for a new gathering space called Sugarloaf Casino.

The much smaller Sugarloaf Casino was built in 1920 and it endured until 1929 when the Wrigleys recognized the growing number of visitors could no longer be accommodated by the much smaller structure. From there, Catalina Casino went down in history.

Beginning in fall, Catalina Island Museum may be hosting an exhibit “When Sugar Loaf Stood: Paintings of Catalina Island Before 1919.” Paintings borrowed from a private collection will give visitors a chance to view what Avalon’s bay was like when Sugarloaf defined the island.