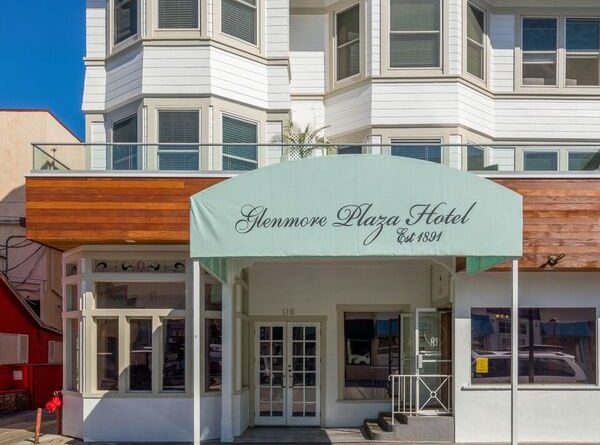 Editor’s Note 8/2/18: Corrections were made to this article to reflect the Hathaways’ years of ownership, prices of hotel rooms and Amoroso’s ownership.

AVALON — There is just something about Glenmore Plaza Hotel from the moment you step inside. On the outside, the hotel is undergoing a little bit of construction, but the lobby interior has an air of mystery akin to the setting of a Hollywood noir film. The hotel, nestled onto Summer Avenue, is the kind of building that seems to have a personality all its own, having hosted soldiers during World War II and celebrity guests like Marilyn Monroe, Charlie Chaplin, Theodore Roosevelt and Amelia Earhart at one time. With each creak, it’s almost as if the house is breathing, inviting guests in to share in the history and secrets of its over-a-century-long existence.

Jimmy Amoroso, Sr., whose family has owned and operated Glenmore Plaza Hotel for more than 30 years, mentions his family is from Chicago, which of course sparks a conversation about his similarity with the Wrigleys.  “The only thing we really have in common with the Wrigleys is that we’re Cubs fans,” Amoroso told The Log.

Coincidentally, when The Log dropped in to visit, the Amorosos were on the verge of celebrating the 37th anniversary of owning the hotel. They have put their sweat and blood into Glenmore Plaza Hotel since July 1981. Amoroso’s family business back then was a stereo speaker company that ran out of Anaheim. According to Amoroso, his father saw the hotel and just could not pass up buying it – and it’s been in the family ever since.

In the midst of check-in around 2 p.m. (one of the busiest times of the day), Amoroso meets with me and takes me next door to a building where now the continental breakfast is served. “In the 90s, this building used to be a comedy club,” Amoroso told The Log.

The only other family to own the hotel nearly as long as the Amorosos are the Hathaways, who owned it from 1929 to 1963. Cy Hathaway, a member of the previous family ownership, told Amoroso he once lived on top of a nursery on the roof of the hotel in the 1930s.

Though many might glamorize the idea of owning a historic hotel, Amoroso says the effort he and his family have put into Glenmore Plaza Hotel has been arduous. “You realize you don’t own the building, the building owns you,” Amoroso, who is constantly in the process of updating the building, almost in a Winchester-Mansion-like style, said.

Amoroso’s son, Jimmy, Jr., also is in the family business assisting with the operations of the hotel. Jimmy Jr. says the Amorosos have lived on the island since 1985 when they moved from Chicago to live on Avalon permanently and he more or less grew up with the hotel.

Jimmy Jr., who is an avid boater and mentions being a fan of FishRap, gives this writer a tour of the rooms.

All the suites are named after celebrities of the silver screen, who at one time or another, stayed at Glenmore Plaza Hotel. One is called the Clark Gable and – frankly, my dear – it is the most impressive suite in the whole building. With a spiral staircase leading up to a scenic, private patio with a gorgeous view, it is no wonder that Jimmy Jr. says this hotel room is a favorite for guests. Staying in the suite during a weeknight or offseason might cost somewhere in the mid to high $547 per night, while a holiday during the height of the summer will likely costs $1,000.

Recently, the hotel underwent a $2 million renovation with newly added marble bathrooms (originally, the hotel had shared bathrooms) and new balconies. Sometimes in the modern age it is easy to forget running water was somewhat of a privilege in the 1800s, but the Amoroso’s lengthy remodel in this historic building is a reminder of that.