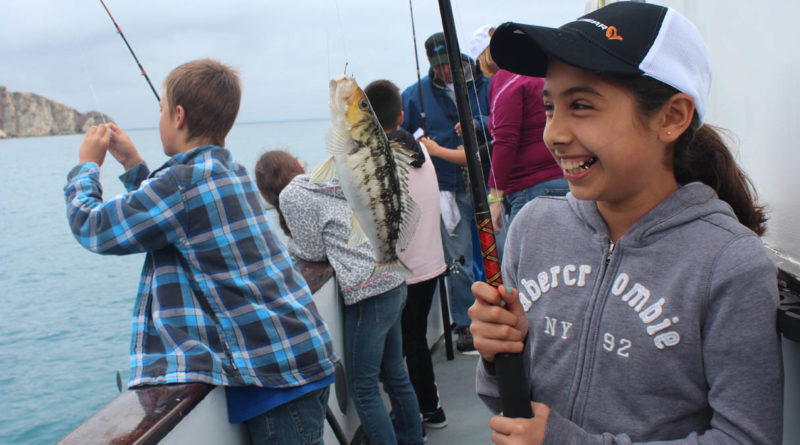 AVALON — The Tuna Club of Santa Catalina Foundation, Phil Friedman Outdoor Youth Program and The Sportfishing Conservancy combined resources to treat youngsters from Avalon School on Catalina Island to a day of fishing in local waters, May 26.

The first or two groups of approximately 80 fourth and fifth grade students, joined by teachers and adult volunteers, boarded the sportfisher Toronado when it arrived at Cabrillo Mole in Avalon Harbor. Toronado, out of Pierpoint Landing in Long Beach, anchored over a small reef where the kids dropped their lines.

Just minutes after the boat anchored over a small reef, the youngsters onboard began feeling their rod tips dance and rattle under attack from calico bass, blue perch, whitefish and sheephead. The deck came alive with shouts, squeals and giggles, as fish flew over the rails and volunteers jumped in to assist the crew in unhooking, photographing and releasing fish, according to a press release.

“This program hopes to instill in children a sense of appreciation for the wonders of nature encountered in the waters around Santa Catalina Island,” said John Talsky of the Tuna Club of Santa Catalina Island Foundation. “They all enjoy the opportunity to catch fish, interact with the captain and crew and learn about the many types of fish that inhabit these waters. Trips like this help youngsters build an appreciation for the rich marine environment that exists so close to their own community.”

“Helping the kids catch fish is an important part of this experience for the adult volunteers, but so is helping them understand the island’s rich marine life and the importance of being good stewards of the resource,” said Tom Raftican, president of The Sportfishing Conservancy. “It’s very important to teach youngsters an appreciation for this — as well as a love of fishing and the outdoors — at an early age.”