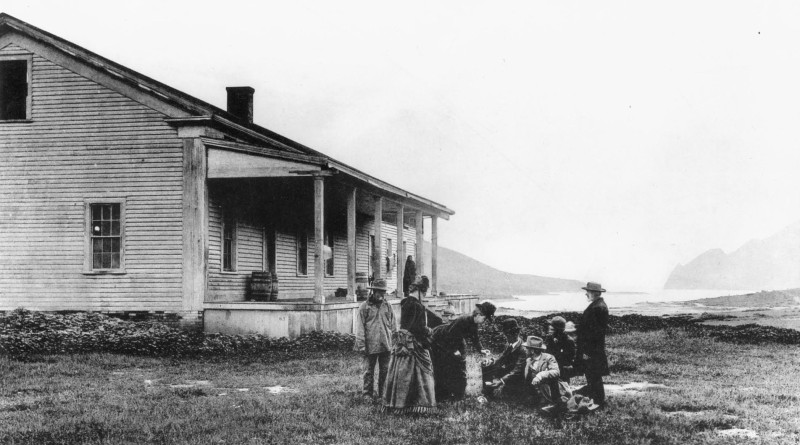 Barracks were built on the Two Harbor isthmus and served as the Civil War’s outpost.Catalina Island Museum photo

Union Army’s presence at Two Harbors in 1864 could have altered island’s course as a resort destination.

Most accounts of Catalina Island’s history provide a broad telling of its initial settlers, the many times ownership of the island changed hands and how William Wrigley, Jr. realized a vision to create a resort town 22 miles off the Southern California coast. Very little, however, is mentioned of Catalina’s brief brush with the Civil War – mostly because historical accounts do not offer much of what happened on the island between 1861 and 1865.

California had just become a state in 1850. Within a decade the state’s electorate voted to split California into two states, but the legislature did not finalize the process because the Civil War happened.

The same could be said of what happened at Catalina a few years later – plans were made but never realized.

Catalina Island between 1861 and 1865 was, depending who you ask, to be a military outpost just off the California coast, a planned concentration camp for Native Americans, or a hotbed of Confederate activity.

Catalina’s brush with the Civil War started shortly after a Union Army detachment was established at Camp Drum in Wilmington in 1861, according to a narrative written by Jennine L. Pederson, a Catalina Island Museum curator, in an April 2009 copy of the Catalina Islander.

Pederson noted several dozen soldiers were sent from Camp Drum to Two Harbors in 1864 to survey the island. Barracks were built on the Two Harbor isthmus and served as the Civil War’s westernmost outpost (the building still stands today and is now home to Isthmus Yacht Club). Most people on the island at the time of the U.S. Army’s arrival were evicted.

At no point did the Union Army announce its intended plans for Catalina Island, according to multiple sources.

Theodore Kornweibel, Jr. wrote about the Union Army’s Civil War presence at Two Harbors in a December 1967 publication of The California Historical Society Quarterly. He said the island was either being used as a reservation for Native Americans or as a proactive attempt to keep Confederate troops away from Catalina.

“On January 1, 1864, a detachment of federal troops sailed from Wilmington Harbor to take possession of Santa Catalina Island,” Kornweibel wrote. “The purpose was to secure the island for use as an Indian reservation.

“The Army, however, never had announced why the island was occupied, so local opinion, buttressed by passed rumors, concluded that the action was taken to forestall a Confederate attempt to seize the island and establish a privateer base,” Kornweible continued, adding plots of a Confederate takeover of Catalina Island was never anything more than a rumor.

“The actual purpose of the Union takeover is still a matter of debate,” Pederson wrote in the Catalina Islander. “Military correspondence revealed the island was being considered as a reservation for Native Americans from Northern California. Whatever the real intent, all interest in the island was abandoned in September of 1864.”

Michele Bestudik of the Santa Catalina Island Co. (and an island historian respected by many locals) added there are many anecdotes of a potential Native American concentration camp or Confederate smugglers looking to pick of Union shipping routes off the Southern California coast. The one verifiable fact, however, is the Union Army had a brief presence on the island in 1864. (The island’s oldest building, the Union’s barracks, still remains standing at Two Harbors.)

Today Catalina is the only inhabited island between San Diego and Santa Barbara. Would Catalina Island be as uninhabited as its Channel Islands neighbors to the north, where people are not permitted to live, had the events of 1864 played out differently?

Of course we will never know what would have happened had the Union Army remained on Catalina – or if there truly was a Confederate threat off the California coast. Just as well, though, as the U.S. Army’s abandonment of Catalina opened the door for private parties – be it James Lick, George Shatto and Charles Sumner, the Bannings, or Wrigleys – to carry through on their respective dreams and plans to develop the island into a resort destination for boaters, anglers and vacationers alike.