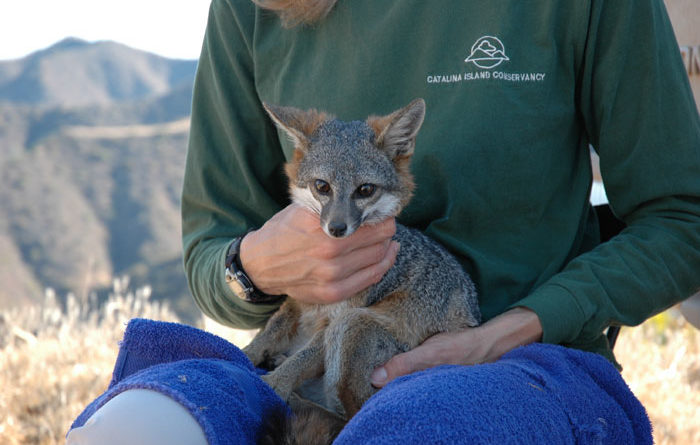 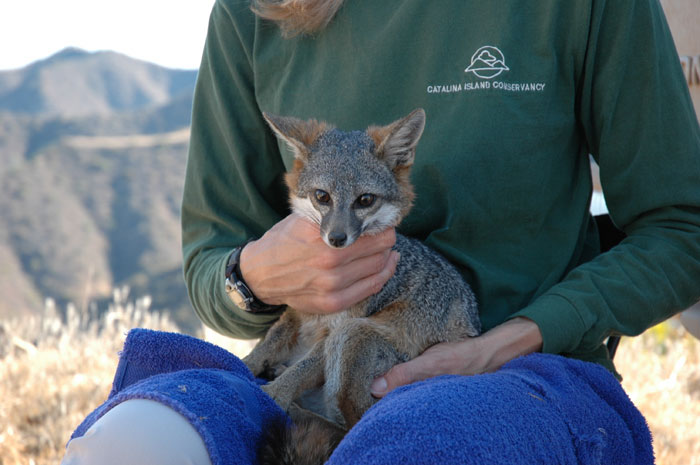 CATALINA ISLAND — Only 14 years ago, the tiny, housecat-size Catalina Island fox, a subspecies unique to the island of Catalina, was on the brink of extinction. The reason, Catalina Island Conservancy experts say, was a disease thought to have been brought to the island aboard visiting boats.

A survey taken in 1997 estimated a population of 1,300 Catalina foxes. But in 1999, there were only 100 left. The cause of the sudden deaths was determined to be canine distemper virus (CDV).

“For a long time, we thought it was introduced by someone’s dogs,” said Ann Muscat, CEO of the Catalina Island Conservancy. “But in recent years, blood tests have shown that the virus is much closer to a distemper found in raccoons.”

Raccoons are not native to Catalina Island, but several have arrived here — on pleasureboats.

“People leave trash on their boat, and raccoons will get on them,” Muscat theorized. “People won’t notice them until they’re almost to Catalina and the animals escape to the island.”

There’s also a theory that raccoons may infect dogs on the mainland that are then brought over to Catalina, added John Mack, chief of conservation for the conservancy. But exactly how CDV came to Catalina is something “we don’t know, and we will never know.”

The Catalina Island Conservancy might not know what caused the near extinction of the island’s largest native mammal and predator, but they did figure out how to reverse the Catalina fox’s decline. The conservancy’s recovery program consisted of four primary actions: translocations of healthy juvenile foxes from the populated West End to the nearly fox-vacant East End, a captive breeding program from 2000 to 2004, the administration of a canine distemper virus vaccine, and survival monitoring through the use of radio collars.

Since 2012, the total number of Catalina foxes has gone up — and it has remained at around 1500. However, conservatory employees still keep close tabs on the animals.

Each fall, biologists place hundreds of small metal traps (243 this year) around the island, set with a bait of dry and wet cat food smeared with loganberry as a lure.

“When we trap the foxes, we don’t just trap them and let them go: They get a full treatment, like a doctor’s visit,” Mack said.             Throughout a period of several weeks, Julie King and other Catalina Conservancy workers will pull the foxes out of the traps; weigh the animals; check their fur for ticks; inspect their teeth, body fat percentage and ears; draw a blood sample; and vaccinate them, before setting them free again into the wild.

“Your average gray fox lives one to three years. These foxes live 12 to 13,” King said.

There will be about 50 foxes that the conservancy doesn’t vaccinate. Instead, those foxes will receive a collar-mounted tracking device, which the conservancy monitors once a week via airplane.

“Each radio collar has a unique frequency,” King explained. “A live fox running around will sound about one beat per second. “When it doubles (in frequency), it most likely means they’re dead.”

When biologists in the air detect the higher frequencies, they note the locations to later reach on foot, to determine the cause of the foxes’ death.

While the population of the Catalina foxes has recovered, Muscat said that the conservancy’s job is never done.

“Because we have so many people coming to the island, education is a big part of conservation,” Muscat said. “If you can help people understand something about natural resources and let them enjoy it, they are more likely to actively help you protect it.”