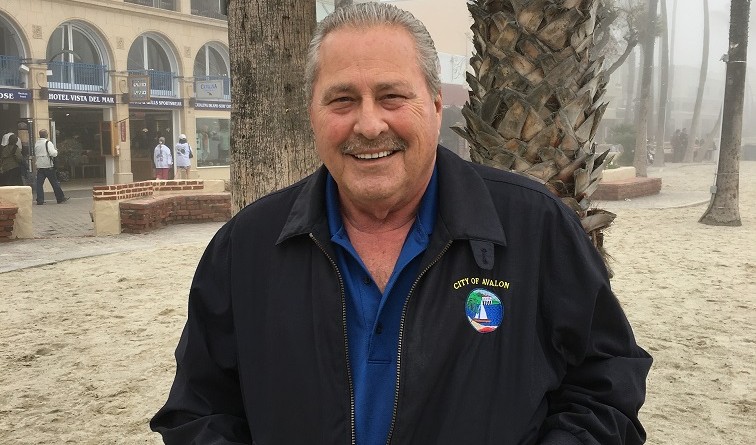 AVALON — The sun is about to set on Dennis Jaich’s time as Avalon’s Interim Director of Public Works, as his temporary position ends in late February. During his tenure the interim public works director has become quite fond of the only incorporated city of Catalina Island.

The Log spoke with Jaich about what he has accomplished and what he hopes to see continue for the harbor in Avalon.

Improving Avalon Harbor’s water quality and maintaining the cleanliness of local beaches were among the advances achieved during Jaich’s tenure with Public Works.

Avalon’s beaches have been off the “Beach Bummer List” for quite a while. Heal the Bay publishes the list annually which indicates the most polluted California beaches based on levels of harmful bacteria.

“The Public Works Department is down on the coastline every morning starting at 6 a.m. We rake and clean [around the harbor] picking up all the debris,” Jaich said.

From April to October, the Los Angeles County Health Department tests the bay water in Avalon once a week and posts the quality of the water, Jaich explained. Avalon city staff conducts its own weekly tests in several different locations along the shoreline and harbor after the L.A. Health Department completes its testing, according to Jaich.

“We continue to test as it’s very important to us to keep the bay clean,” Jaich stated.

Avalon also implemented a falconer program to keep birds at bay and help maintain water quality in the bay. Falcons are predators to seagulls, pigeons and other birds, Jaich pointed out. The city deploys a falcon to deter certain birds from flying over Avalon Bay, which helps keep fecal bacteria from entering the water.

Another factor taken into consideration by Public Works is the aging infrastructure of Avalon city.

A sewer lateral maintenance program was implemented about four years ago, according to Jaich, and a lot of money was spent replacing and cleaning sewers. Jaich stressed the importance of keeping this up to ensure no new leaks or damages to the sewer system occur.

The city is also implementing a $2.4 million capital improvements project in the next couple weeks, according to Jaich. A contractor will be replacing old sewer manholes and sewer piping. Sewer pump stations will be upgraded as well as electrical facilities.

Almost all the homes and businesses in the city of Avalon have saltwater for the purpose of flushing toilets. It limits the demand for freshwater, since the city is still in Stage 3 of water rationing. It is important to repair and replace saltwater valves to keep the system up and running, Jaich stressed.

What’s next on tap for this skilled technical person in public works following his departure from Catalina Island? He is returning to his permanent home in San Diego.

“I have a project to start down in San Diego Bay,” Jaich said.

Jaich will be involved in the construction of upgrading a very large pump station which takes the majority of the sewage from the city of San Diego and pumps it underneath the bay out to Point Loma for processing.

“[Jaich] has been a great resource to the City of Avalon during his tenure, and we will miss him when he leaves,” Jinkens stated in an email to The Log.