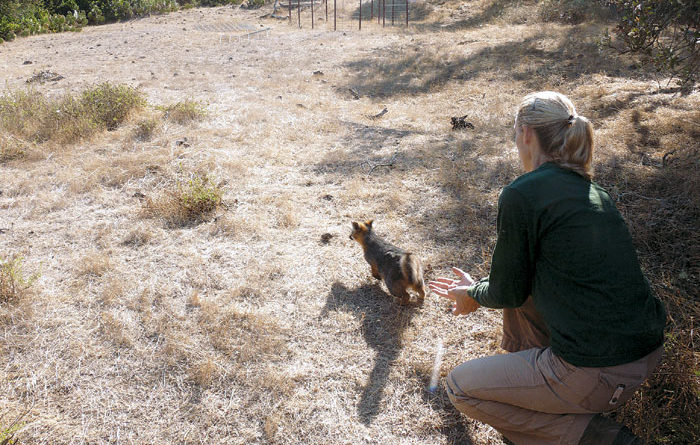 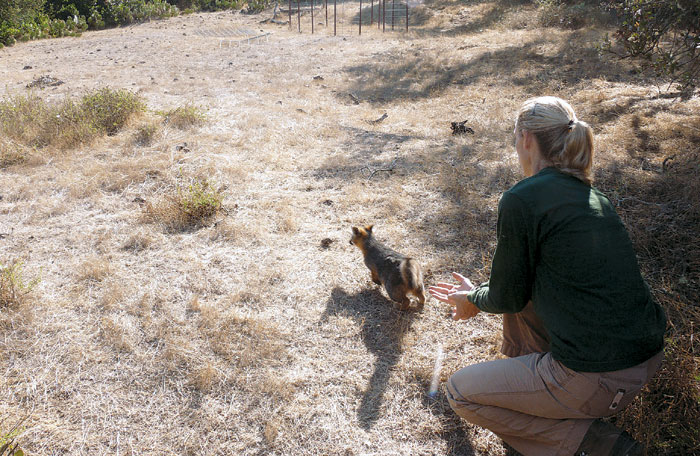 Thirteen years after the species was threatened with extinction by an outbreak of canine distemper virus (CDV) that was possibly introduced by a stowaway raccoon, the population is now stabilized.

Julie King, director of conservation and wildlife management for the Catalina Island Conservancy, reported there are now approximately 1,500 Catalina Island foxes. The total estimate was determined after conducting the annual island-wide trapping survey for 2012.

That approximation has decreased from the 2011 estimate of 1,542.

“It is a slight decrease from last year but still within the same range,” King said.

Biologists use a population-modeling program called DENSITY to analyze capture and recapture data for animals such as the fox, and calculate a population estimate for the entire island, according to the Catalina Island Conservancy.

Once foxes are lured into a wire box cage by their favorite meal of a sweet berry mixed with cat food, each fox is accessed, weighed, microchipped and vaccinated against canine distemper and rabies. Ear mites are treated, a blood sample is collected and radio collars on select foxes are inspected and replaced if necessary before each fox is released at its site of capture, officials explained.

Conservancy biologists will continue to vaccinate at least 300 foxes annually in their effort to protect the population against CDV and rabies. Weekly aerial monitoring of 50 to 60 radio-collared foxes will also continue.

“This year, we reduced the number of traps included in the survey from 400 to 243 and utilized six of the 10 trap-lines that we had completed last year,” King said. “We expected to catch fewer individuals in total, but the number of foxes captured within these six lines was almost identical to that captured within these same trap-lines last year.”

There are six subspecies of the Catalina Island fox. Four of the six subspecies have declined in population due to diseases and serving as prey to golden eagles. The foxes reside on the California Channel Islands.

Although Catalina is home to the largest island fox population, the island’s protection policies fall behind those put into place on the other Channel Islands.

“All of the other Channel Islands have instituted policies where there are no dogs or cats allowed, and all non-native or feral animals have been removed,” King noted. “This is not possible on Catalina, due to our large resident human population and annual visitors numbering about 1 million.”

Human activities contributed to more than half of the 24 fox mortalities documented in 2012, she added.

The Catalina Island fox remains listed as “threatened” by the California Department of Fish and Wildlife and “endangered” by the U.S. Fish and Wildlife Service (USFWS). USFWS is finishing up its five-year status review of four listed island fox subspecies. Once that is completed, a decision may be made to down-list or delist one or more of those populations, or their protected status may remain unchanged.

“We would need to show that all threats associated with the original listing have been adequately addressed,” King said. “Until we can reduce or eliminate the threat of a future disease introduction, the Catalina Island fox may not ever be delisted.”

King said that the fox population on the West End of the island has been fairly stable for the last 10 years, because CDV didn’t extend west of the Isthmus.

“The East End population has been increasing annually up until this point,” she said. “This is the first year it has reached a plateau.”

King said she expects the number of foxes on the island will fluctuate slightly from year to year. “These fluctuations will be linked closely to available resources, and rainfall,” she said.

Visitors to the island are asked to keep an eye out for the foxes, if they drive golf carts, bikes or motor vehicles on the island.

“You will be seeing a lot more foxes, especially during dawn and dusk,” King said. “Please keep your speed down to 25 miles per hour and watch out for them.”