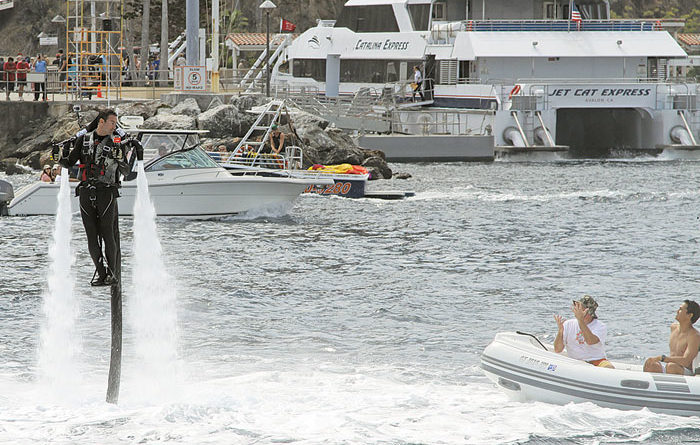 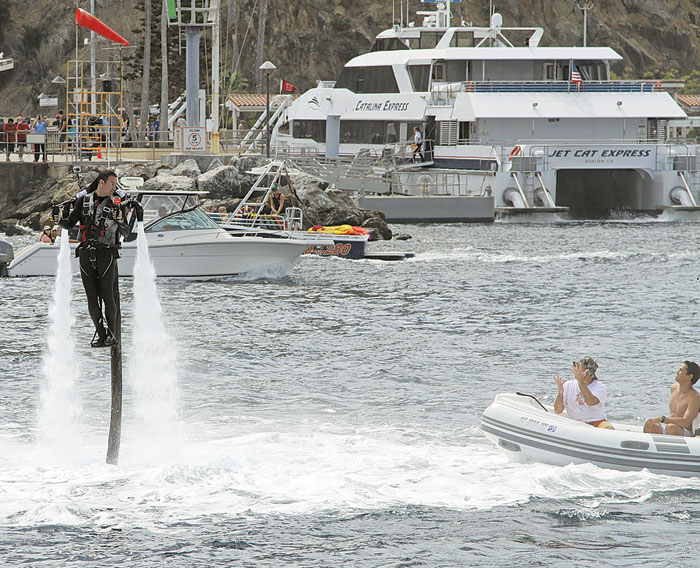 AVALON — After nearly 4.5 hours traversing the 26.2 miles from Newport Harbor to Catalina in a water-powered JetLev jet pack on Sept. 29, Dean O’Malley set a world record holder for the longest jet pack flight — and the first Catalina Crossing by jet pack.

The trip was scheduled to coincide with Catalina’s air show and to commemorate the 100th anniversary of Glenn L. Martin’s first seaplane flight from Newport Beach to Avalon.

O’Malley, president of JetLev Southwest, took on the challenge to prove the capabilities of his company’s product, and to get the ball rolling toward more jet pack distance records.

“Up until now, there wasn’t even a record for jet pack flight distance,” O’Malley said. “Now, the bar has been set. I’m hoping there’s someone out there right now saying to himself or herself, ‘I could fly farther’ or ‘I bet I could do it faster.’”

For now, O’Malley holds the record proudly after the trip — which he expected to take around 2.5 hours — turned into a marathon run, following a change of weather.

The trip started at Balboa Peninsula’s M Street Pier, where a press conference was held shortly before he headed out of the harbor at 7:15 a.m.

“The weather really changed on us, going from great conditions in the morning to not-so-great conditions pretty quickly,” said JetLev co-founder Katie Morris. She — along with her father, company founder John Morris — rode alongside O’Malley in John Morris’ Carver 52 Jolly J, which served as a support boat for the trip.

Sunny skies and clear weather at the beginning of the trip had O’Malley traveling at a 10- to 15-knot clip with smooth seas ahead. However, a sudden change had the jet pack pioneer traversing a 3- to 4-foot swell while flying into 15- to 20-knot headwinds.

O’Malley had originally hoped to make it across the channel using only one 22-gallon tank of gas to power the R200 jet pack. But when the weather changed, the plans did, too.

“We all knew it was going to be a long trip and there were going to be unexpected setbacks, but we couldn’t have anticipated that the whole trip would take more than four hours and we’d use literally every drop of the 50 gallons of fuel that we had.”

As he approached Avalon, O’Malley was running on fumes, making a few passes and some tight turns for boaters in the harbor and spectators on the beach.

“When the world-famous (Catalina) Casino came into view, I knew we’d make it,” O’Malley said. “At that point, I flew outside the protective wake of Jolly J, and I had some fun. As with a lot of long trips, there’s an amazing sense of satisfaction when you realize that it’s no longer a matter of ‘if’ but ‘when.’”

With the record set, O’Malley hopes others will test the boundaries of jet pack flight, and bring more participants to the high-flying activity.