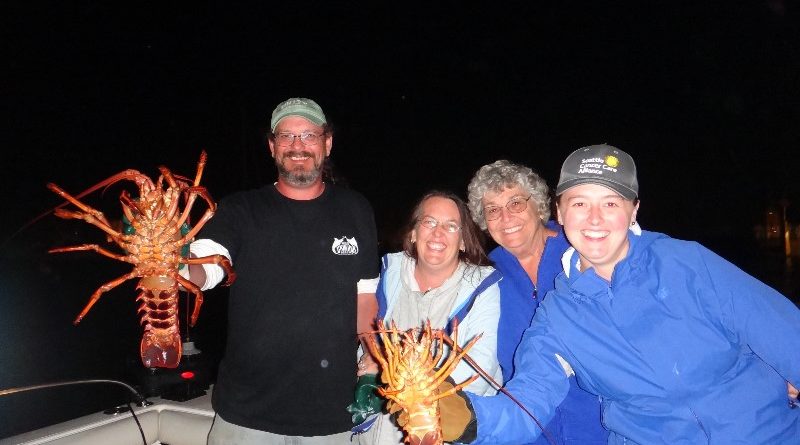 CATALINA ISLAND ― Catalina Island is one place where people go to cast hoop nets and catch fresh lobster, in addition to all the other recreational activities the island has to offer.

Lobster fishing on the island has, in fact, been slightly better this season than previous years, according to Capt. John King. King, who owns Afishinados Charter and provides tourists with lobster fishing excursions.

King took a group out recently and said 101 lobster were caught with 12 of the lobsters the legal size to keep.

“Most years your keeper ratio is about 10 percent,” King stated. “For every 10 lobsters that are in the net, you might get one legal. This year, we are a little higher than that.”

King shared an interesting tip and a special recipe for lobster lovers. So many people throw away the lobster legs when the sweetest meat is in the legs, according to King.

He recommends cutting the lobster legs off the body just below the hip bone or knuckle. Instead of throwing the legs away like many people do, put the lobster legs in a microwavable dish with a lid with a small gap to let the steam out. Microwave the lobster eggs for one minute and make sure you to listen for as many pops as lobster legs are in the dish.

“It cooks the meat perfectly and shoots them straight out of the leg,” King explained. “So what we love is lobster legs and eggs in the morning after we hoop netted. We take the lobster legs and stick them over some scrambled eggs with some cheese and salsa.”

The season for recreational lobster fishing officially opened in California on Sept. 30 and continues through March 21, 2018. The long season provides ample time to fish for lobster.

Catalina Island has not been restricted.