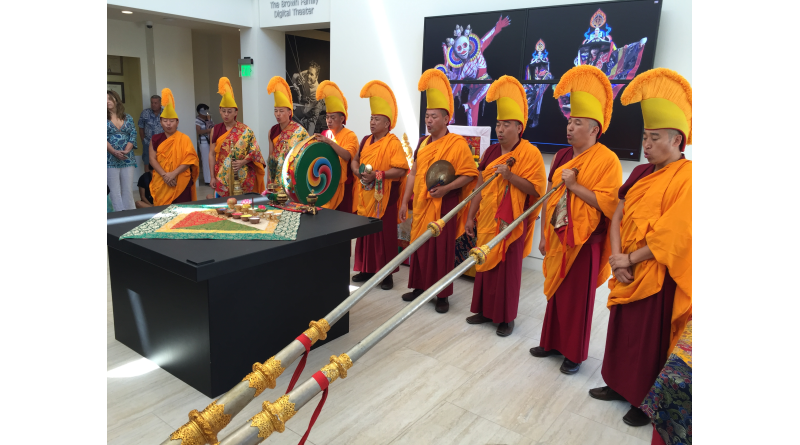 The Catalina Island Museum made a splash this summer by moving out of The Catalina Casino and opening up its new digs about a mile away on Metropole Avenue. The museum’s shiny new home is flashy enough to make headlines all on its own: Modern architectural design; open and airy spaces on the second floor to take in Avalon Harbor and city streets from above; comfortable courtyards; and, many other bells and whistles to complement a full sized exhibition hall.

Opening the new museum with a Bettie Page exhibition and Buddhist monks performing only made the museum’s opening all the more lively.

Museum officials hope Avalon residents and frequent visitors are steadily exposed to arts and culture beyond the island’s aquatic border by highlighting a diverse array of subjects such as Page and the spiritual works of Buddhist monks.

“With the opening of its new Ada Blanche Wrigley Schreiner Building, the Catalina Island Museum has taken a new approach to what it offers its members and guests. It has embraced a dual vision, focused on both history and art. The building’s three galleries are a direct reflection of this,” an island spokesperson stated about the museum’s vision.

Buddhist monks spent several days leading up to the Fourth of July holiday creating a mandala, a colorful symbol of the universe. The monk’s display of serenity and patience was juxtaposed by an in-depth exhibition on Page, considered the first-ever pinup model. The dedicated exhibition space featured dozens upon dozens of photos of Page posing on a beach in Florida and other locales. Featuring Page’s work as an artistic accomplishment fulfilled the museum’s mission to introduce a broader segment of art and culture outside the scope of Catalina Island to local residents and visitors.

Indeed the Page exhibition – which runs through November – is tastefully done and highlights how her modeling influenced future artists.

Of course the museum’s new digs is much more than an outwardly looking art house. Much of Avalon and Catalina’s history is on permanent display as you meander through the largest of the three galleries. On display are artifacts from the Chicago Cubs’ spring training days on the island, numerous photographs and paintings of people who influenced the island’s sociological development, and plenty of other intricate mementos of Catalina lore.

The museum’s other galleries are dedicated to special exhibitions of photography, painting and sculpture, according to the museum’s spokesperson.

“The two galleries dedicated to art allow the museum to bring to the island exhibitions traveling from all over the world. These exhibitions are intended to provide experiences not otherwise available on the island,” the spokesperson stated.

Also on the first floor is the museum gift shop, where the island’s signature artifacts and memorabilia are offered for sale.

Be sure to check out the digital theater with stadium seating. The theater, which features a film on Catalina’s history, is adjacent to the lobby.

On the second floor you will find an art gallery featuring many colorful painting and images of Catalina Island. Just beyond the art gallery is a courtyard allowing patrons to take in panoramic views of the city and harbor or just take a pleasant stroll. The far end of the museum’s second floor features a performance space.

“Music and film also play key roles in the museum’s overall vision. The new building’s digital theater and 100-seat outdoor amphitheater will be used for lectures and film screenings,” stated the museum spokesperson. “The two open-air plazas on the building’s second level offer flexible spaces for music and dance performances.”

The Catalina Island Museum is located at 217 Metropole Avenue. The museum is open 10 a.m.-5 p.m. daily. Admission is free to paying members and children 15 and younger. Admission is $7.50 for non-member adults and $5 for military or seniors.

Upcoming events and exhibitions include National Museum Day on Sept. 24, a Holiday Symphony Concert on Dec. 9, and, possibly, a display of Dale Chihuly’s works in spring 2017.