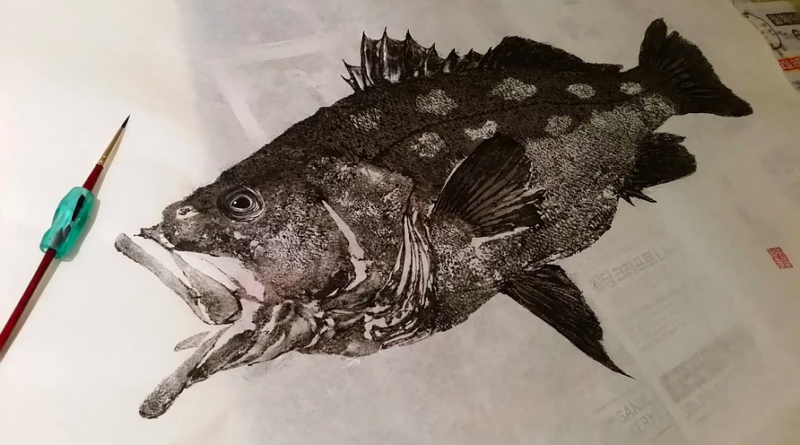 The exhibit, titled Scoot and Water: Gyotaku Records of Catalina, opens at the Artists’ Plaza Gallery in the Ada Blanche Wrigley Schreiner Building March 28. The exhibit will be up through Nov. 1. It will feature 17 qyotaku prints created from local fish by artist Dwight Hwang.

“Many of the pieces for the Catalina Island Museum exhibition were created specifically for the show,” Hwang said in an email. “Especially the ones where we added strands of giant kelp for the fish to swim amongst. We’ve produced a great deal of work of fish from all over the world, but this is the first time we’ve been tasked to create a show from our own local waters.”

Qyotaku was conceived in mid-19th century Japan as a way for anglers to record impressive fishing catches.

The original method involves using a brush to swab calligraphy ink made of pine soot and water, called sumi, directly onto the surface of the fish. The fish was then pressed onto a sheet of Japanese paper made from mulberry bark, called washi, to create a fossil-like record. The Catalina Island Museum said Hwang is one of the last practicing artists of the traditional Japanese method.

Hwang said while he is an avid angler, the fish depicted in his work were provided by other anglers, commercial captains, fishmongers and marine biologists.

Hwang said most, if not all of the originals will be available for purchase and reproduction prints will be for sale in the museum gift shop.

Hwang is slated to have an exhibition at the National Oceanic Atmospheric Administration center in La Jolla later this year. He said that exhibit will feature the usual fish but also the deep water creatures.

Admission to the Catalina Island Museum is free for members. Adults cost $17 and children age 15 and under are free with a paid adult admission. Seniors, active military, veterans and students with a valid I.D. are $15.