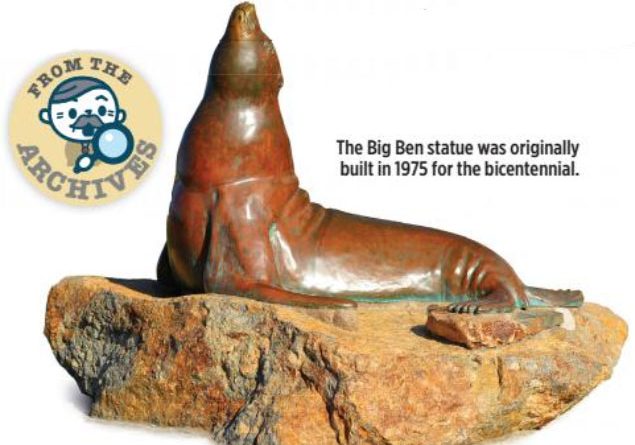 The Old Ben statue was first built as part of the bicentennial celebration.

CATALINA ISLAND一 In a 2009 article from the Log, a reporter wrote about the relocation of a bronze statue depicting Old Ben, a friendly sea lion that inhabited the harbor and made friends with locals and tourists.

Looking through the archives brought the famous sea lion back to the attention of the Log staff for the 50th anniversary edition.

Old Ben, Big Ben, or just plain Ben, was a 1,800-pound sea lion that appeared in Avalon Harbor in 1898, according to a blog post on Looking for Mabel Normand.

Ben made his world debut in the 1914 film “Sea Nymphs” starring Mabel Normand and Roscoe Arbuckle. Pictures show the stars of the film coaxing Big Ben out of the surf with food.

This wasn’t entirely uncommon for Ben, who would come out of the surf to accept food from people around the beach and pose for photos much to the delight of locals and tourists.

Old Ben was also known as a bit of a prankster according to the Love Catalina website. The cheeky sea mammal would hide around small tour boats and wait for the last passenger to get on board and then launch himself out of the water causing the passengers to be sprayed with seawater barking loudly in delight at the passengers.

The sea lion disappeared sometime in the 1920s, leaving behind a colorful legacy. In 1975 a life-size bronze statue of Old Ben was sculpted by Stanley Rosin as a part of the Bicentennial celebration.

The statue is a life-sized Ben sitting on his rock looking out of over the bay ready for pictures and snacks.

The statue was originally placed atop the rocks at Cabrillo Mole before being moved to Crescent Street adjacent to the Catherine Hotel in 2009.