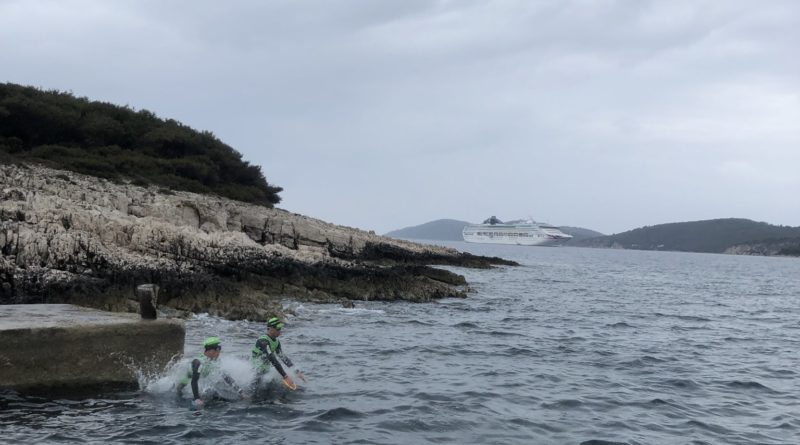 AVALON—Imagine racing with a partner, tethered together, on a 27-mile course that includes running and swimming – that means running in wetsuits and swimming in shoes. It turns out Avalon may be hosting a race of this caliber on an annual basis. One the most challenging endurance competitions, ÖTILLÖ Swimrun, was approved by Avalon’s City Council to come to Catalina Island from Feb.29-March, 1 2020.

There was an outpouring of support at the meeting, including from Tony Budrovich, CEO of Catalina Island Conservancy. Budrovich cited ÖTILLÖ events have been largely environmentally conscious, leaving no waste behind. While other athletic events could produce trash, the running/swimming combination does not. One of Catalina’s challenges has been keeping the small island clear of trash, especially during the high tourism seasons. Events creating too much waste are potentially hazardous to the environment, but ÖTILLÖ’s environmental awareness makes it a fit for Catalina Island.

Andy Hewitt of Swimrun Americas, Inc. gave a presentation on the event and stated that approximately 1,500 people could be expected to visit Avalon during the game, which could translate into $450,000 or more in revenue. Mayor Ann Marshall stated she felt this is the kind of event city staff would encourage to take place on Catalina Island.

City council members unanimously agreed to give the race a chance for the upcoming year, with data gathered after the completion and a $5,000 contribution from city funds. Further sponsorship of the potentially annual event would be considered at a later date. Council member Richard Hernandez was absent from the meeting.

ÖTILLÖ Swimrun “was born from a drunken bet,” according to the official website, after four Swedish friends (Anders Malm, a hotel owner; Janne Lindberg and the Andersson Brothers) challenged each other to this unique competition. In 2006, Michael Lemmel and Mats Skott endeavored to bring the fun challenge into a commercial race. Currently, the event takes place in several locations, including Hvar, Cannes and more, and culminates in a World Championship event.