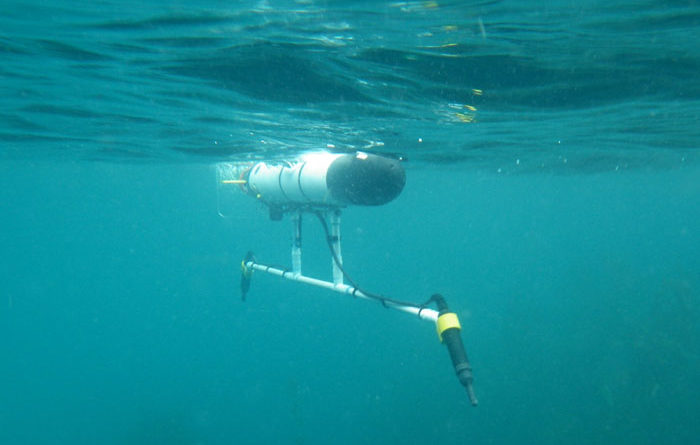 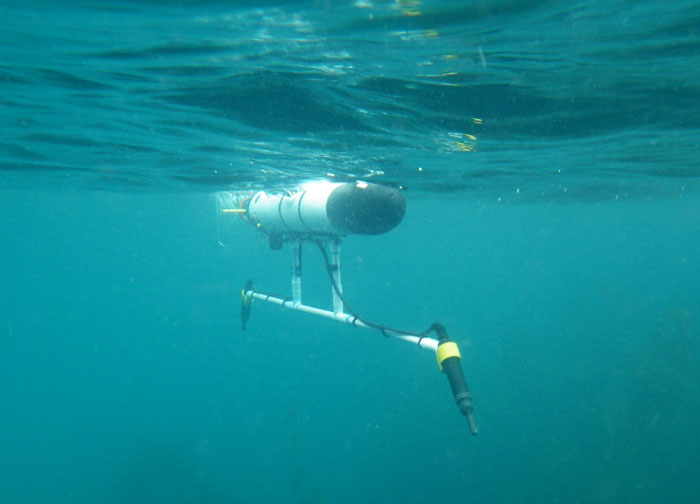 For the past three years, Chris Clark, an associate professor of engineering at Harvey Mudd College, has launched two of the robot-type devices off Big Fisherman’s Cove to follow leopard sharks.

“If the shark moves, then the robots will travel with it around the bay or cove,” he said.

He is currently working to perfect the system to allow for the tracking of larger sharks on longer migratory paths.

The devices have been designed to track sharks movement in the water. Equipped with hydrophones, which allow researchers to listen for pings from the tracking tags that have been attached to the sharks, they discreetly follow the tagged sharks, circling them and sending information back to researchers.

Each robot is fitted with a camera, pressure sensors and water temperature sensors.

Typically, a researcher would head out to areas heavily populated by sharks, catch and tag the shark and then return it to the ocean. Back on land, the marine biologist will wait for a ping transmitted from an acoustic device to be heard on the receiver. That allows them to determine the location of a shark and follow it.

Alternatively, researchers would head out on the water on a boat that was equipped with an array of receivers and follow the pings of a shark that was headed out of the bay and into the ocean, where receivers are not as easy to deploy.

“They would do that for two to three days max, following a shark around — which is time consuming, labor intensive and difficult,” Clark said.

“The idea was to make this mobile receiver array based on underwater robots. We tried to create a system that could not just detect where a fish or shark is, but also follow it around,” he explained.

For the last two years, Clark has conducted research at Seaplane Lagoon at the Port of Long Beach and Big Fisherman’s Cove, where 50 to 60 leopard sharks have been spotted. He and his crew spend about one week at the University of Southern California Wrigley Institute for Environmental Studies, running experiments and deploying the robots from nearby docks.

The more the teams continue tinkering with the robot’s capabilities, the closer they get to accomplishing the ultimate goal of creating tools for biologists and fishery management staff to “better understand what is going on with marine life and how to preserve and monitor it,” Clark said.