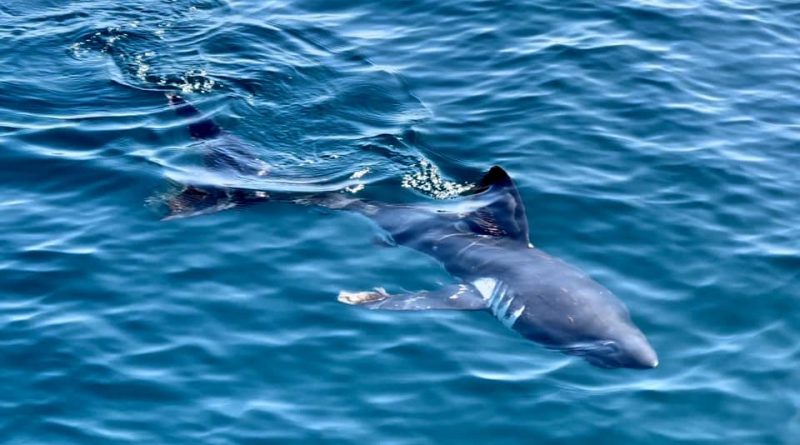 CATALINA ISLAND— Whale watchers aboard a recent trip with Dana Wharf Whale Watching were treated to a rare sighting of a salmon shark. The shark was spotted near the East End of Catalina Island on March 26 during an “8 Hour Ultimate Whale Watching Trip” aboard Ocean Adventure.

On the trip, Captain Steve Burkhalter encountered what he thought at first was Great White Shark.

“After further review and sending our video & pictures to the experts, the boat was thrilled to learn what we encountered was actually a Salmon Shark!” wrote Dana Wharf on its website.

Chris Lowe, a Professor of Marine Biology and the Director of the Shark Lab at California State University, Long Beach, said some distinguishing characteristics of salmon sharks include a darker-colored body, pointy nose, and football-shaped body, but the tell-tale sign of salmon shark is a white patch extending from their belly across their pectoral fin.

“That’s the easiest way to tell them apart,” said Lowe.

Salmon sharks can be found across the North Pacific from the Bering Sea and the Sea of Okhotsk to the Sea of Japan in the western Pacific, and from the Gulf of Alaska to southern Baja California, Mexico. They spend the summer months in Alaska but are seasonally migratory, following their prey, which include schooling fish such as salmon, herring, and sardines, according to the Shark Research Institute.

“Since Salmon Sharks are typically seen in Alaska and we are so far from Alaska—we figured he must be visiting for Spring Break,” wrote Dana Wharf on its website.

Lowe said while sightings of these sharks might be rare in Southern California, the sharks are fairly common in this area. He said in the spring, Southern California is a pupping ground for salmon sharks and many other species, including white sharks, mako sharks, thresher sharks, and even blue sharks.

“Salmon sharks, which normally in the summer are off the coast of Alaska feeding on salmon, hence their name, will come down, females will give birth in Southern California,” said Lowe.

He said once they give birth and salmon season starts, around May or June, they migrate back to Alaska. He said one reason sightings might be not so common in Southern California is because they like cooler water and they could be staying a couple of hundred feet down where the temperature is lower. He also said it is not uncommon to find babies washed up on the beach in the summer because of a bacterium that can infect their brain and disorientate them.

“Finding them is much harder, we know they’re here because tracking data shows they come down here and then we see lots of the babies during the summer, when I say lots, I mean the ones that strand,” said Lowe.

He went on to say now that most people have a cellphone with a camera, it’s getting easier to see marine animals and identify them.

“Now we can see a picture,” said Lowe. “So, I would say in the last 15 to 20 years that’s greatly increased our ability to gather data, something we didn’t have 20 years ago. So, I think it’s going to get better and citizens can contribute information that helps us a lot with science.”