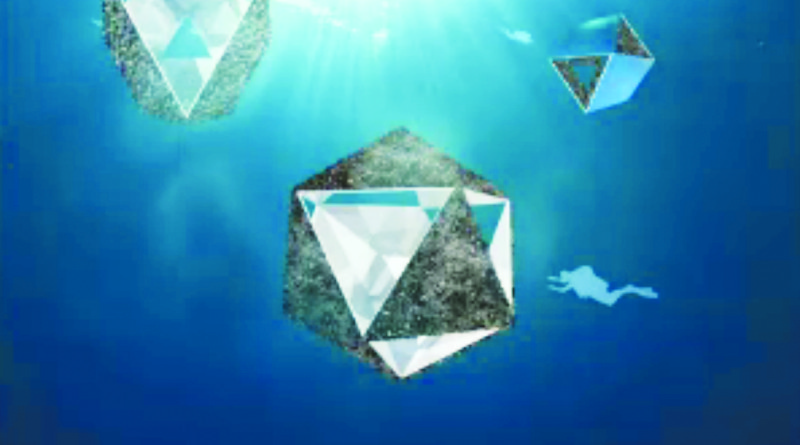 AVALON — Catalina Island’s dive park could soon – and briefly – be home to three underwater sculptures created by a local artist and displayed in conjunction with an exhibition at a major art museum on the mainland.

The Avalon City Council will send a letter to the California Coastal Commission to support Doug Aitken’s ambitious plan to have three underwater sculptures installed near the Catalina Casino by this summer. Aitken is a multimedia artist specializing in film, photography and sculptures.

“The work is intended to be several contemporary sculptures under the ocean,” Aitken told council members. “We’re looking for a project that raises awareness of the ocean.”

An exhibition surveying Aitken’s work is planned to be on display at the Museum of Contemporary Art in Los Angeles starting in September; the planned exhibition would coincide with the three-month run of underwater sculptures in Avalon Harbor.

A specialized mooring system would keep the underwater sculptures buoyant but stable. Divers would be able swim through each sculpture without being in danger of colliding with it, a diver told council members.

All three underwater sculptures would be available for viewing and access by anyone willing to dive into and wade through Avalon Harbor near Casino Point and outside a local Marine Protected Area. The sculptures would also serve as a marine preserve, according to Aitken.

“These sculptures, which would be geometric in design, would be moored to the bay floor and floating under the surface at varying depths in order to make this artistic experience accessible to divers/swimmers of all skill levels,” Avalon city staff stated in a report to council members. “Portions of each sculpture would be mirrored to reflect the underwater landscape and thereby create a kaleidoscope encounter for the viewer. Other surfaces would have a rough, rock-like texture.”

Plans also call for a floating platform in the harbor to serve as a staging area for divers or viewing of the underwater sculptures. Portions of each sculpture could be viewable from the platform for non-divers to enjoy the art installation from above. The sculptures would also be lit at night.

“When we think of art we often think of paintings on walls,” Aitken said. “With this project we’re really looking at creating some things very unique, kind of a moment in time.”

The underwater sculptures would be free and open to the public; the works would be in Avalon Harbor for about three months in late summer and early fall.

Aitken said he was working with the Coastal Commission to gain the agency’s necessary approvals.

Council members expressed concern about tidal issues, emergency response and liability. They were also worried about how the platform would operate, particularly how divers access it or if it was inviting to ambitious but inexperienced waders seeking to swim to it from shore.

Avalon Harbormaster Brian Bray said he hoped the underwater sculptures would complete its run in Avalon Harbor before this year’s storm season arrived.

The sculptures are being built and installed at no cost to the city of Avalon. The city, however, anticipates an increase in tourism revenue during the three-month run of the underwater sculptures.

“I think this project can draw a very interesting audiences to Catalina,” said Aitken. “I think it can bring a cultural dialog.”