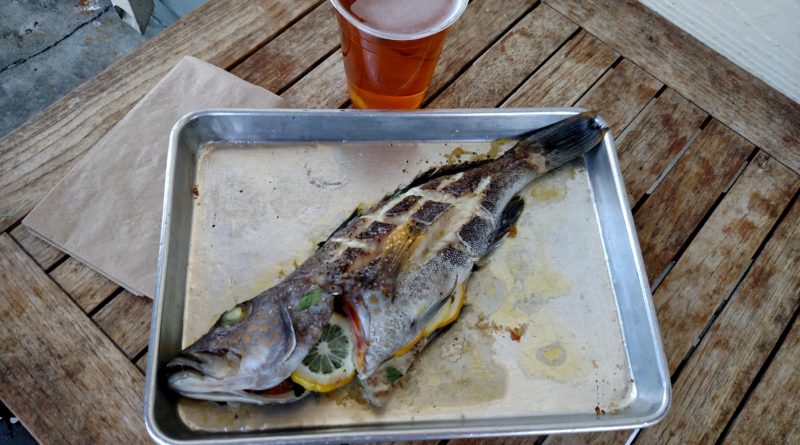 For many boaters it’s now fishing season. Some anglers may return with their catch suddenly realizing they don’t really know how to clean their fish properly, let alone cook it.

I hear about fish cooking failures routinely from friends, because I’m also a food writer. Not having grown up in a fish-eating family, I discovered huge gaps in my knowledge. Even though I went to cooking school and theoretically learned how to cook fish, I’ve had failures so awful that even my cat rejected them. All too often half the fish stuck to my non-stick pan.

To get some tips on preparing fish I went to see commercial fisherman and San Diego fish cooking guru Mitch Conniff, chef/owner of Mitch’s Seafood, located on the harbor in Point Loma (1403 Scott St.) alongside the fishing docks.

What you need to know about Conniff is that, prior to opening his popular casual eatery and right as the Great Recession took hold, he spent seven years as a chef aboard a 90-foot sportfisher, feeding fishermen during extended trips along the Pacific coast. His restaurant now serves over 1,000 pounds just of white fish varieties weekly.

Key to a tasty fish with well-textured flesh is bleeding the fish thoroughly after it’s caught and icing it for 24 hours before eating, according to Conniff.

“When fish are caught and ‘dispatched’ they go through a process of rigor mortis where the fish gets hard and the flesh very tight. After about 12 hours the body relaxes and becomes pliable once again. That’s when the fish should be filleted and then prepared. The only exception is a large tuna or swordfish which can be filleted after being bled, but it should still have at least 12 hours to rest before cutting into steaks. Bleeding refers to clipping the gills and/or spiking the fish around the throat area and allowing most of the blood to flow out of the fish as soon as possible after it’s caught,” Conniff explained.

When it comes to cooking you need to match the technique to the fat content of the fish, I learned. The higher, direct-heat method I’ve been using, whether on a cooktop or a grill, is suited only for higher fat fish, such as darker meaty fish or fattier white fish such as Baja grouper, tilefish, black cod or Alaskan halibut. Leaner white fish, such as California halibut, snapper and the many varieties of rockfish or seabass, cook better with lower heat methods, he said. Higher heat dries out the leaner varieties, while lower heat may render fattier varieties a bit soggy.

“Generally, the simpler the method, the better,” Conniff said.

His favorite methods for cooking white fish at home are steaming in parchment paper packets (substitute foil if using a grill) atop a bed of aromatic vegetables and roasting them whole in the oven. Both are fast and easy.

Fat content is the best way to determine cooking time. A leaner fish, such as those caught in warmer waters off the California or Baja coast, might cook in only four to six minutes per inch of thickness, while a similar thickness of Baja grouper might require seven to nine minutes per inch. Fish caught in colder waters, such as Alaskan halibut, are richer in fat than their California cousins.

Whatever you do, don’t overcook your fish. As with steaks, check for firmness: the firmer the fish, the more cooked it is. Also keep your seasonings light and simple, he added.

If you’d like to try his techniques, you can find several of Conniff’s recipes posted to the right of this article.

This technique also works well on the grill if using indirect heat. Slitting both sides of the fish prevents the skin from curling as it cooks and helps the fish cook evenly. Count about three- quarters to one pound of whole fish per person.

1 2-3 pound white fish (seabass, rockfish, snapper, grouper or whatever is available), cleaned and scaled with the gills removed.

Preheat oven to 450 degrees or heat a grill to about 450 degrees, setting up a grill area with indirect heat. On each side of the fish cut 3-4 diagonal slits into the skin of the filet about ¼ to ½ inch deep into the flesh. Brush both sides of the fish with olive oil. Season both the exterior and interior cavity with salt and pepper. Place the fish on an oiled sheet pan. Stuff the lemon slices and herb bundle into the cavity of the fish. Roast the fish in the oven or place the sheet pan on the grill over indirect heat, covering the grill. Roast about 12-15 minutes depending on the size. The fish is done when the flesh is opaque throughout. Alternatively a thermometer inserted into the flesh of the fish should read about 125 degrees. Serve with Herb Salsa Verde garnished with lemon slices.

This is an excellent accompaniment for any grilled or roasted meat or vegetable and especially chicken and fish. The sauce will last several days in the refrigerator, but make sure to bring it to room temperature before use.

1 anchovy filet, finely minced or small squeeze of anchovy paste (optional, but it really adds that little something to the sauce)

Finely chop all of the herbs with an extremely sharp knife to avoid bruising the herbs and ensure they maintain their bright green color, or chop all herbs together in a food processor. Place in bowl and stir in remaining ingredients except salt, noting that the anchovy is quite salty. Taste before adding salt. Let sit at room temperature for about half an hour to let the flavors marry before use.

You can also cook parchment paper packets on the grill, but only if using indirect heat and placing the packets on a metal tray. It’s safer to substitute foil to protect the packets from flames.

4 -6 ounce portions of any white-fleshed fish (halibut, rockfish, grouper or whatever is fresh and in season)

Salt and pepper to taste

Preheat oven to 425 degrees. Mix together all sliced vegetables and garlic. Lay sheets of parchment paper on the counter. Place equal amounts vegetable mixture in the center of each piece of parchment and season lightly with salt and pepper. Place a piece of fish atop each mound of vegetables. Season fish with salt and pepper, placing a pat of butter on each. Sprinkle 1 to 2 tablespoons wine on each fish slice, being careful to limit the amount of liquid in each packet. To close, bring two opposite sides of the parchment together and fold over 3-4 times, making sure to leave room in the packet for steam to build up. Fold the remaining sides 3-4 times, folding them under to allow the weight of the packet to rest on the folds, keeping them sealed. Place each packet on a sheet tray, allowing some space between packets. Place the sheet tray in the oven. Cook for about 10-15 minutes depending on the thickness of the fish, about 10 minutes per inch of thickness. Serve right from the parchment packet or unwrap the parchment and remove by sliding a spatula underneath the vegetables, removing everything at once and pouring the juices over the fish as a sauce. Serve with rice or potatoes.

All recipes from Mitch Conniff, owner/chef of Mitch’s Seafood in Point Loma