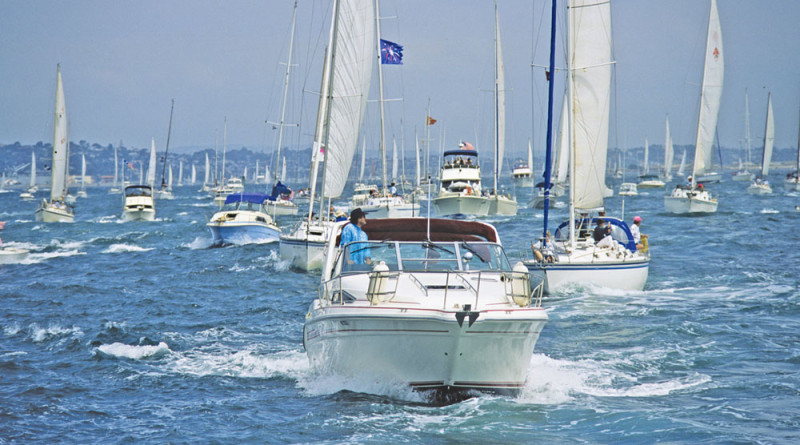 Vessel operators are reminded to practice safe boating while out on the water during the busy summer season. Capt. Nicole recently witnessed a 45-foot powerboat drifting on the water, with the captain on the bow talking to his passengers, not visibly engaged in boat operations while in a crowded channel.

The Fourth of July weekend at our marina proved eventful, full of celebrations, including a traditional decorated dinghy parade, festive tenant party and warm camaraderie among dock-mates whose hectic schedules intersect mostly around summer holidays.

Yet the issues surrounding occasional and inexperienced boat operators cropped up vividly over the weekend, with two incidents visible from our dock, reminding us of the importance of common-sense basic safety and boating principles.

The more serious incident occurred Sunday afternoon, as several boats jockeyed for access to a busy dock often used as a passenger pickup/drop-off spot. The wind gusted throughout the day, normally requiring more vigilance while operating in close quarters.

The sound of loud drunks aboard one boat not visibly under command attracted my attention. On this vessel I counted at least 16 people standing on deck, drinks in hand, no PFDs in sight and no railing within easy reach. The apparent captain was standing on the bow talking, his back to the dock, not watching as the boat drifted toward the dock.

The captain and his passengers were fortunate and avoided an accident. But what was he thinking? Didn’t he understand he could have hit the dock or a passing wake could have knocked his guests into the water?

Earlier we witnessed a collision as a powerboat captained by a very occasional boat operator hit another vessel docked nearby. Normally this captain is careful, but this time he didn’t correct for the wind gusts pushing his boat in a narrow channel.

Was he distracted by the yelling kids and excited adults on his boat? Fortunately there was no apparent damage to either boat.

It’s unusual to observe two such incidents within hours. Yet these are typical of midsummer weekends when newbie and occasional boaters, who fire up their engines or hoist their sails only a few times a year, take out their rarely-used vessels, usually accompanied by an inexperienced family and guests.

Following an absence of weeks or months, many arrive at their boats, laden with drink-filled coolers and party food, and immediately head out on the water without checking their engines or other systems. Often something fails. Sometimes they’ve already cast off lines without starting their engines and can’t secure their boats without help. Or, if they do manage to get on the water, they speed off from the dock, totally ignoring safe operating principles, speed restrictions or basic navigation rules.

If you have acquaintances operating their boats in this manner, suggest a boating safety class sponsored by the U.S. Coast Guard Auxiliary or Power Squadron. Recommend an up-to-date copy of the Rules of the Road and a laminated “Quick Guide” listing the rules and basic navigation principles to stow near their helm. They’re available at marine stores, from Point Loma’s Seabreeze Nautical Books  and the Maritime Institute.

Yet the holiday weekend also brought reminders of why it’s important to be good neighbors.

Arv and I moved our boat into a new slip just down the dock and benefited from a neighbor’s timely assistance with our lines. With our high freeboard it’s challenging to grab pre-positioned lines from the dock, even with an extended boathook. I was grateful when a new neighbor, passing by, noticed we needed help and sprang to our assistance.

Neighborliness is always appreciated. Be ready to help out when you see the need. It benefits everyone on the water.