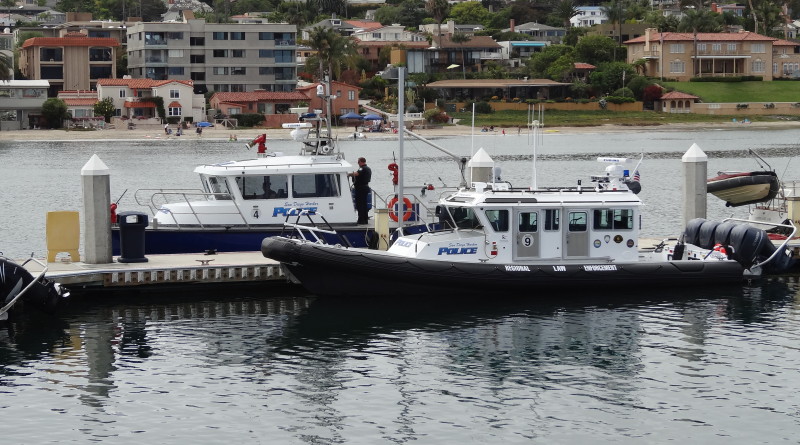 It was 2 a.m. on a Wednesday morning at our dock when I awoke to the sound of someone stumbling around overhead. Half asleep, I quickly realized an intruder was aboard our boat.

I woke my husband and we crept up to the salon, where we saw a man weaving around our fantail furniture, seemingly drunk. Arv turned on lights as I called out, asking who he was and what he wanted. He demanded we open up. He jiggled our screen door locks while Arv secured our fantail doors.

I grabbed my cell phone and dialed 911. The dispatcher connected me to the San Diego Harbor Police (SDHP), who asked my location and a description of the intruder, keeping me on the line until police arrived. The intruder climbed over our railing and split. Two officers quickly corralled him and determined he was, as I’d suspected, a hapless drunk in the wrong place, looking for his buddy’s boat.

We were fortunate. The Harbor Police responded to our call within a few minutes and we were never in danger. But I started thinking:  what should you do if you’re in an anchorage or away from immediate police help?

The good news is such incidents are rare, so rare that SDHP community policing officer Sgt. Todd Rakos could recall only “a couple” of similar occurrences throughout his 24-year career involving an intruder boarding an occupied boat. Those intruders usually turned out to be drunks’ boarding what they thought was a friend’s boat.

In case of an emergency at an anchorage, response time is an issue. SDHP staffs two boats with two officers on San Diego Bay 24-hours a day from Shelter Island and Chula Vista docks. Optimally they respond within five to 10 minutes.

In Mission Bay the SDPD operates boats on a limited schedule, relying on Lifeguards to provide boats at other times, including at night. In emergencies, Lifeguards pick up an SDPD officer at the dock, with response estimated at 10 to 15 minutes.

Harris explained that being on a boat is like hiking in isolated areas without rescue close at hand: expect to rely on yourself until help arrives. It’s important to be prepared and know your resources and how to defend yourself if necessary.

Rakos recommended creating a commotion and making as much noise as possible — blow your horn — since usually other boats are nearby in anchorages. Call for help, using a cell phone to 911 or VHF radio, stating your location clearly, he advised. Throw items at an intruder to impede him until you can make enough noise.

If you have an AIS system, be sure to register it, said Sgt. Jeff Brandt of the Oceanside Police Department Harbor Unit. Pressing the emergency button broadcasts your location and need for immediate assistance. He stressed being prepared and knowing your defenses. Lock your doors and vent only through smaller hatches or ports.

Use your flare gun as a weapon, but only on deck or risk starting a fire. If you keep pepper spray handy, remember that in close quarters it will affect you as well as your target.

My lessons learned? I now secure all doors at night and keep a charged cell phone by our bunk — confident in the rarity of an intrusion.

Have a tip or story to share? Email editor@thelog.com,with “Dock Lines” as the subject.