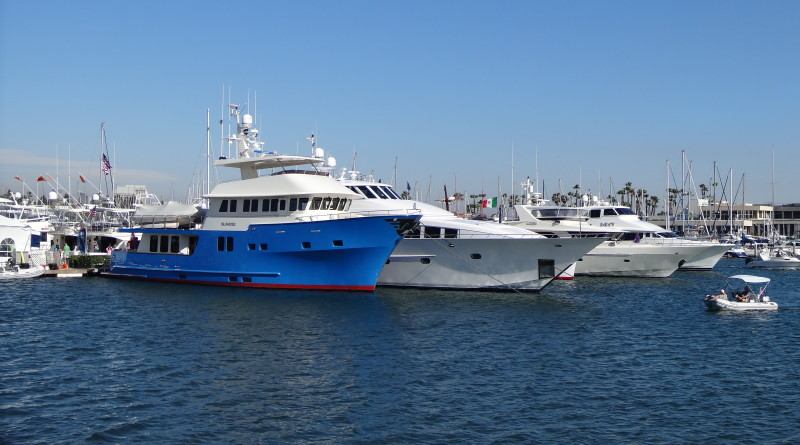 : About 10 superyachts over 80 feet were exhibited at the San Diego International Boat Show in June.Capt. Nicole Sours Larson photo

The migration of innovation.

When Arv and I first attended the Miami Boat Show in the early ’90s, I recall being blown away by the technology: sophisticated navigation, communications and entertainment systems, all computerized. Most retailed in the mid-five to low-six figures and were targeted at the superyacht market. I recall being fascinated by my first view of a large flat-panel display hooked up to a nav system – and thinking how wonderful it would be to have that for our boat, but not at an unreachable $25 to 50K.

Fast forward to 2016: All those systems and more are not just affordable but common equipment for mid-size recreational vessels. While many of these devices were first developed for large commercial ships, it was their adoption by the superyacht market, yachts over 80 feet, and still larger megayachts that made them increasingly accessible to the recreational industry.

Who, 20 years ago, would have envisioned the availability for the recreational market of specialized yacht security and tracking systems? Individual yacht internet networks? Or wireless yacht controllers?

A few years ago I covered the discontinued YachtFest boat show. In touring a Lazzara superyacht I was surprised to see many design elements and features Richard Lazzara, who designed our Viking while at Gulfstar, had translated into our much smaller boat. Yet the design similarities were unmistakable.

And how many mid-size vessels now boast wine coolers? Or watermakers? Both started as superyacht amenities.

More important than migrating design features and more affordable electronics is the fact that the luxury yacht industry is a genuine job generator, too – about 28,000 American jobs. I recently attended the Superyacht Summit, sponsored by the U.S. Superyacht Association, in San Diego. There I learned that the maintenance/operation costs, including crew salaries and training, agent and management fees, provisioning, refits and repairs, dockage, fuel, etc., for a superyacht average 10 to 15 percent of its value. For a $40 million superyacht, that translates to an annual expenditure of $4 to 6 million, a sum that helps support numerous businesses that smaller recreational vessels depend on for their own upkeep.

We bought Burgundy in Florida in 2008, just as the Great Recession took hold nationally. She lived most of her prior life in Florida, enduring the buffeting of numerous hurricanes. In sum, she needed a variety of repairs, replacements and TLC.

Once we brought her into San Diego and began making upgrades, I remember talking with the principal of the firm that made our new mattress. He said he hadn’t had a recent order from the owner of a boat smaller than 55 feet. Our canvas guy had similar stories: superyacht owners, with independent means, were still making discretionary purchases, while recreational boaters were delaying them.

So, next time you encounter a superyacht, look at it as an innovation laboratory for your current and next boat — and a job creator for American marine businesses we boaters depend on.