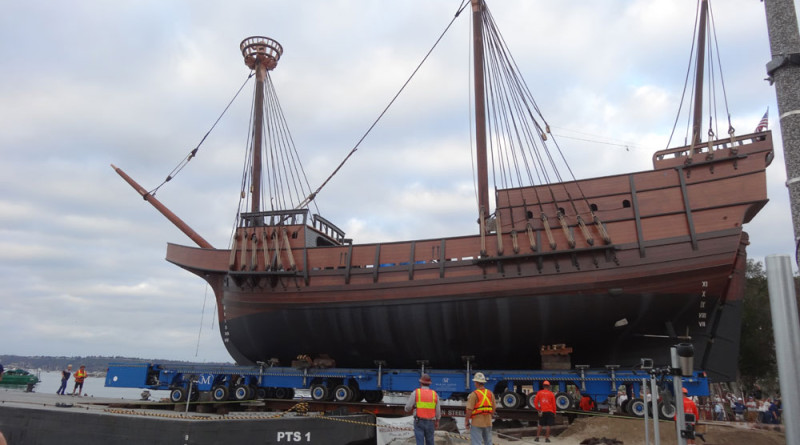 About 7:45 a.m. on Wednesday, July 22, spectators cheered as San Salvador slowly rolled from her San Diego build site at Spanish Landing onto a massive barge, inching her way along a steel bridge aboard a hydraulic crawler, as a Pacific Tugboat held the barge against the shore. Marine Group Boat Works of Chula Vista generously donated use of the sophisticated motorized transporter, along with their operational expertise, while NAASCO donated steel for the temporary bridge.

While the actual move from land to barge took only minutes, planning for a revised launch method spanned months. Previously San Salvador – correctly called a “representation vessel” rather than a replica, since no plans or images of Cabrillo’s original vessel exist – was scheduled to launch April 19 following a procession along Harbor Drive and public celebration. Those plans were scrapped once naval engineers rechecking weight calculations determined the ship was 20 tons heavier than reported. The added weight made the vessel too heavy to transport by road.

While analyzing over 15 options to move the vessel from land to sea, they settled on the marine crawler-to-barge method as the “safest and easiest for the task,” he said. San Salvador project manager Mark Montijo credits naval architect Doug Sharp, San Salvador’s designer, with leading the launch planning team, drawing on expertise from volunteers from the San Diego chapter of the Society of Naval Architects and Engineers.

While the museum decided to keep the timing of the ship’s move quiet, San Salvador devotees staked out Spanish Landing for signs of change. Over the weekend they, along with some of the 350-plus volunteers who donated over 105,000 hours to construct the ship, were waiting and watching.

Unseasonable rains delayed preparations, which included a delicate maneuver to twist the ship 90 degrees, lining it up with the barge. The museum brought in specialized structural movers Whillock Contracting Inc., to engineer the turn. They installed sets of heavy-duty wheels under the ship. On Monday, inch by inch, the ship slowly pivoted. Meanwhile workers moved earth to support the steel ramp the ship would cross onto the barge during a short window surrounding low tide.

By July 21, Marine Group’s bright blue crawler was ready to move into place under the ship as workers gradually removed supporting I-beams and guy-wires and adjusted supportive wood blocks under the hull.

But they encountered a glitch with the transporter’s hydraulic system, which was calibrated for travel over the boatyard’s level surface rather than the site’s four percent grade. Ashley explained that a call to the crawler’s Italian manufacturer provided an easy fix: the addition of 15 gallons of hydraulic fluid. But the tide had risen too high.

July 22, with low tide at 7:44 a.m. and all technical issues resolved, San Salvador was ready to move, to everyone’s elation and rousing cheers. Once the bridge was removed the tug pulled the barge off Spanish Landing, leaving for Marine Group’s boatyard, where final work will be completed.

In addition to joy that everything worked as planned, Ashley expressed thanks to the community, the Port of San Diego, which donated the build site, the many contractors, including Whillock and Pacific Tug, who discounted their services and to generous donors who turned the dream of recreating Cabrillo’s vessel of discovery into a reality.

Ashley hopes San Salvador will join the museum’s fleet on the embarcadero in September, in conjunction with the Festival of Sail.