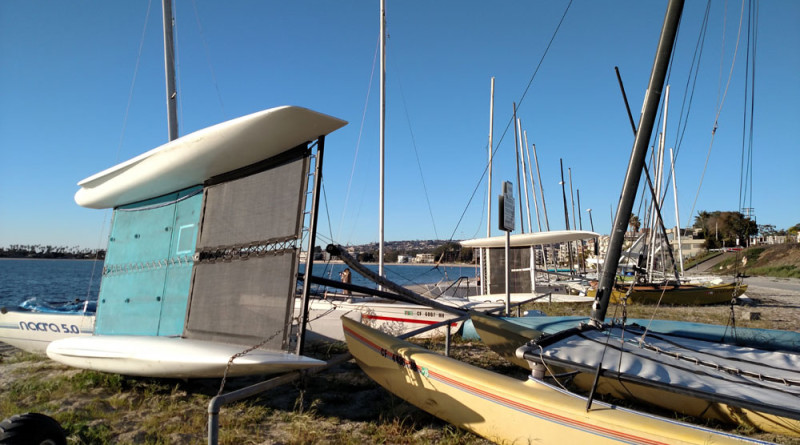 A rare storm noteworthy for its steady 30 to 40 mph winds and regular 50 to 60 mph gusts roared through San Diego and Southern California on Jan. 31. While it brought less than one-third inch of rain to coastal communities, the wind was the killer.

When it was over about a dozen boats had broken free around the embarcadero and Shelter Island, causing the San Diego Harbor Police (SDHPD) and towing services Vessel Assist and SeaTow to work through the night rescuing adrift boats from the rocks and collisions with other boats and structures. Around San Diego Bay at least eight boats sank, necessitating subsequent salvage operations. Other wind-buffeted boats broke loose when cleats gave way on their docks.

“One of them got wedged under the embarcadero and caused damage to our electrical system which we’re going to have to repair. Another wedged itself between Californian and the mooring platform until the Harbor Police managed to drag it away. While thus entangled the boat caused abrasion damage to some of Californian’s planking on the port bow well above the waterline,” he said.

Conditions were “as bad as I’ve seen them,” observed SDHPD spokesman Lt. Todd Rakos. His colleague, Bay Control Officer Jim Dreher, explained that they were on the verge of declaring their boats would venture out only to protect life, but not property, until the weather improved.

While it’s embarrassing as well as dangerous to have your boat break free in a storm, is there anything you can do to lessen that possibility, as well as protect your boat from damage?

Both Dreher and San Diego Lifeguards Marine Safety Lt. John Sandmeyer warn that in high winds and rough seas even the best-prepared boat may still suffer damage or break free. They agree such windstorms are rare in San Diego.

Yet with El Niño upon us and more extreme weather likely with climate change, it’s better to take as many precautions as possible.

Start with a regular inspection of all your mooring gear and lines, especially at their chafing points such as hawsers and chocks and turning points at cleats, both on the boat and dock, advised longtime boating and sailing instructor and USCG Auxiliary past Division Capt. Don Johnson. Replace them if they show any wear or fraying.

“Hard points where lines fasten, such as cleats, Sampson posts or bollards, must be examined for weakness, particularly where they are through-bolted. Examine backing plates and fasteners; any signs of movement or corrosion are causes for refastening or replacement,” he said. If applicable, ask your diver to inspect your mooring ball, he added.

For mooring lines, Ed Vick, a long-time rigger with Downwind Marine/Sailing Supply, recommends using three-quarters or one-inch line of the best quality nylon double braid, which is stronger than traditional three-strand line and has more give than natural products. For a mooring ball he recommends doubling or tripling lines if a bad blow is forecast.

Many boats that stayed fast to their moorings or anchors lost their dinghies in the storm, Dreher said. Don’t forget to check your dinghy lines.

For boats beached and locked to a beach bar, consider adding a second cable or chain. On Mission Bay’s Sail Bay, after the storm about five catamarans secured with single lightweight cables to the Moorland boat bar lay overturned and jumbled together.