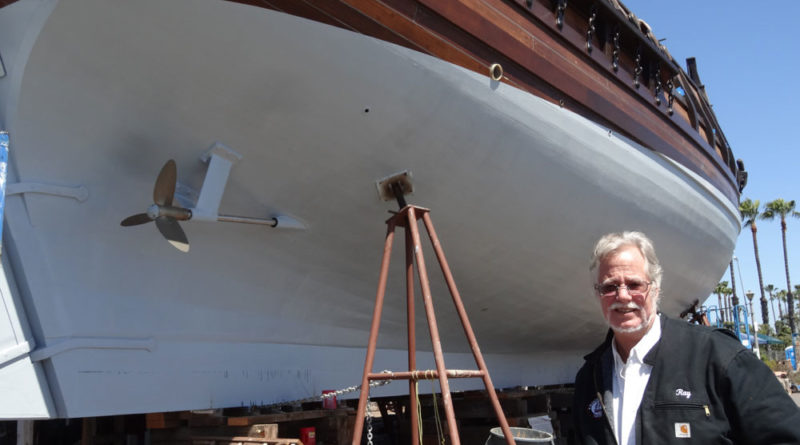 If you’re a passionate San Salvador junkie like me, you’re probably wondering what’s really going on with the launch plans. I’ve recently spoken with Ray Ashley, longtime president/CEO of the Maritime Museum of San Diego, to get the inside scoop.

Ashley expected considerable criticism and second-guessing when he announced postponement of the ship’s much-anticipated public launch two weeks before the event. Instead he received an outpouring of support from the public and the museum’s backers and donors.

“The public response has been overwhelmingly positive. It has shown the degree of interest in the project — there are more people interested in it now than before,” Ashley said.

Ashley pulled the plug on the planned April 19 public ceremony after it became clear that the firm weighing the vessel prior to the launch had miscalculated its weight by about 20 tons. The museum’s naval engineer, in verifying calculations and preparations, thought the reported 131-ton weight was “too good to be true.” He was right, as consultants confirmed. The extra tonnage scuttled the museum’s primary launch plans because the load was too heavy for San Diego’s largest cranes and transport equipment. Other complications eliminated the backup plan, forcing them to seek alternatives.

Everyone involved agreed that launching the vessel is feasible, but, without sizeable expenditures, it couldn’t be done in public as scheduled. They’re considering about 15 varied approaches, Ashley explained, requiring different, heavier equipment.

The maritime community has again stepped forward with generous offers to donate use of equipment, even, if needed, the Los Angeles-based heavy-duty crane normally costing $250,000, but these are available only when not deployed elsewhere. Ashley said they’re planning to launch the ship by late May.

“We could have done it with a public ceremony if we spent enough money, but we have an obligation to be frugal and as conservative as possible with donors’ money,” he added.

In stretching donors’ dollars the museum has done well. The vessel’s construction, conceived over a decade ago, was originally budgeted at $6 million. Despite complications with materials, the actual cost has come in at about $6.2 million, thanks to mostly volunteer labor and donated and discounted services, bringing the project’s total value to $11.2 million.

Current plans call for holding a public commissioning ceremony, similar in spirit to the April 2011 keel-laying celebration, once the ship is floating and rigging and outfitting is completed. At the keel-laying guests — including your columnist — were invited, unforgettably, to hammer their initials into the keel, an old maritime tradition, before serious construction began.

The San Salvador is a re-creation of the flagship of Juan Rodríguez Cabrillo who sailed into San Diego Bay on Sept. 28, 1542. The ship matters historically because it provided the “first contact” between Europeans arriving in California and the native Kumeyaay people. A petroglyph dating back hundreds of years found on a boulder in the remote San Diego backcountry showing a masted sailing ship may be a contemporary depiction of Cabrillo’s arrival.

The current San Salvador isn’t technically a replica ship because no one knows what the original looked like. Doug Sharp, the prominent naval architect who designed the approximately 98-foot Spanish galleon, based his drawings on 16th century paintings — particularly those of Dutch artist Pieter Breugel the Elder — sunken wrecks and extensive research in the Spanish archives, aided by maritime historians.

For San Salvador fans the launch delay only enhances our eagerness to see the ship completed and in the water. But, as Ashley observed, it’s better “to do it logically, properly and safely.”