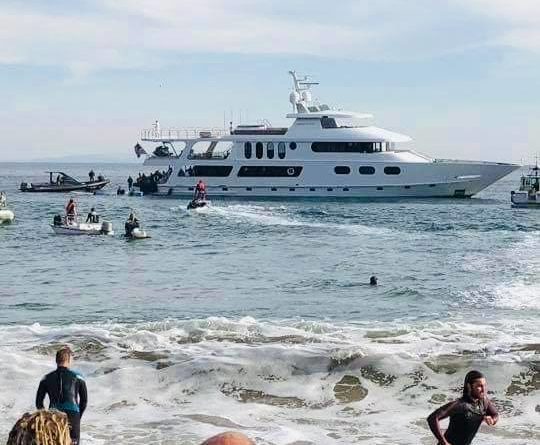 SAN DIEGO—During the holiday season I’m drawn to festive and uplifting topics. With so much recent trauma from never-ending shootings, devastating wildfires and senseless national politics, it’s hard to feel upbeat about what’s happening in our world.

Yet amid such sadness and tragedy, glimmers of hope leapt out through the profusion of volunteer efforts and generous donations of time, services and goods to help support fire victims and refugees.

I was particularly heartened to see boaters front and center rallying behind Woolsey fire survivors, and transporting supplies from SoCal ports into Malibu’s Paradise Cove.

Howard Leight, owner of the 143-foot superyacht Leight Star and the Malibu Rocky Oaks Winery, spent the first Friday and Saturday of the Woolsey fire, November 9 -10, defending his winery, home and vineyards from the flames. After suffering some damage to his vineyards he was ready to deploy his SoCal-based yacht, delivering essential supplies to Malibu residents stranded in their homes and on the beaches. Firefighting efforts had closed roads serving the area.

The Redondo Beach shop Dive N’ Surf also put out a call for goods donations for Malibu-area fire victims. Again using social media, the Meistrell family, owners of Dive N’ Surf and founders of water sport company Body Glove, announced they would transport donations to Malibu via Body Glove’s 73-foot boat, the Disappearance, to residents and firefighters. Hundreds of community members responded, filling up the dive shop’s parking lot, donating so many supplies that the Meistrells sent a second boat, the 40-foot Que Paso, filled with supplies, including horse feed.

This was an unusual mission for YAG, whose humanitarian missions rarely target the mainland U.S. Typically the nonprofit YAG operates around the globe, distributing humanitarian aid to often isolated, coastal communities and islands impacted by natural disasters where transporting or landing essential supplies is difficult.

Drewelow, owner of yacht support agency C2C, conceived the idea for YAG while travelling in remote parts of the world during his 10 years as captain of the superyacht Dorothea.

“We were always conscious about giving back to the people through the maritime industry,” he explained.

As a captain he recognized how well-equipped superyachts are with their highly capable crews could function as self-contained disaster-relief vessels. Large ships are able to deliver essentials for disaster recovery — power, fresh water, food, communications, medical assistance and cargo — without outside support in devastated areas.

Now, when a natural disaster strikes, whether earthquake, hurricane or other event, Drewelow contacts his network of participating yachts to determine what vessels are in range of the affected region and able to divert to pick up and deliver humanitarian supplies.

When his home region was in need, Drewelow sprang into action.

The world seems much brighter now thanks to the good Samaritans willing to help fire survivors.

One thought on “Finding generosity and hope amid tragedy”