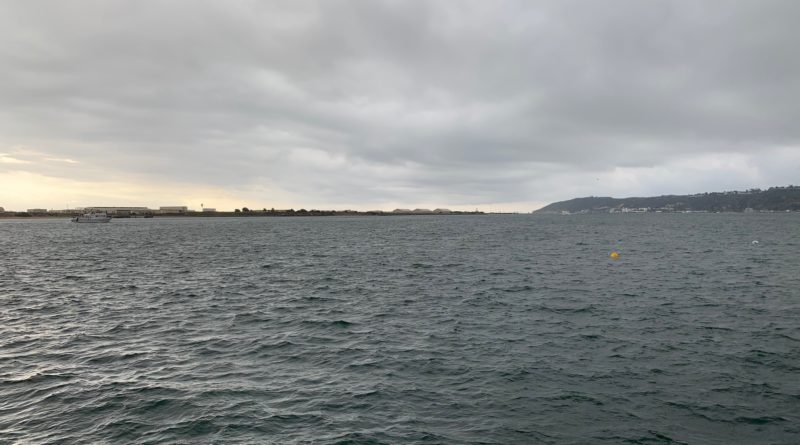 SAN DIEGO—The city of San Diego, which controls the Zuñiga Jetty Shoal waters, finally developed and passed an ordinance dealing with abandoned boats that often break apart and foul the waters and beaches by North Island Naval Air Station. In the works since committee approval in October 2017, the ordinance received its first unanimous vote April 9. It’s taken so long to find a solution because multiple governmental jurisdictions are involved.

Yet the way this ordinance is structured shouldn’t pose a problem for responsible boaters needing a short-term anchorage. The proposed law – it won’t be official until the City Council votes a second time – bars anchoring by unattended vessels for more than two hours near Zuñiga Jetty.

Mariners, under the law, could still anchor there, theoretically for as long as desired –provided someone is physically aboard the boat. They can anchor there for a few days, a week or even longer, but they can’t leave the boat with no one aboard for more than two hours. Two hours, the theory goes, is a permissible length of absence at it allows boaters time to dinghy off to buy groceries, run errands or grab a meal.

Will a vessel be towed and confiscated if everyone leaves for three or four hours? That’s unlikely, given enforcement realities. But departing for an extended period, should a San Diego Harbor Police vessel come by to check whether anyone is onboard, will expose owners initially to a ticket and, if they’ve left or even abandoned the boat, potential impoundment and disposal.

The new ordinance gives the city more teeth to search out abandoned vessels’ owners to recover impoundment and clean-up costs and reduces the time owners have to respond to the city prior to final impound and disposal from 90 to 30 days.

Why such harsh measures? The problem of derelict boats in the Zuñiga Jetty anchorage grew exponentially once it became the last-resort anchorage around San Diego after the Port District closed the notorious A-8 Anchorage off National City in 2008.

The Navy, which owns the adjacent beach, reports that they removed 61 sunken, beached or broken-up boats between November, 2010 and September, 2017, 24 boats in 2017-2018 and 18 already in the first three months of 2019. The area has become a general dumping ground for unwanted and deteriorating boats and equipment that the owners either don’t want or can’t pay for disposal. Intense wave action from winter storms causes the vessels to deteriorate and disintegrate. About 20-50 wrecks now sit underwater.

These boats also represent an environmental nightmare, with many polluting waters through leaking fuel and other hazardous materials. One abandoned boat broke apart, spilling 200 to 400 gallons of fuel. Clean ups and disposals are also costly; a single broken boat cost $50,000 for environmental remediation.

Abandoned derelict boats with irresponsible owners are a growing problem throughout California and the country. Rather than try to sell it – if the boat still floats – owners just strip it of any identifiers tying them to the vessel and dump it for government agencies to deal with.

Lifeguard Sgt. Ed Harris reports his department has 10 abandoned boats on Mission Bay buoys awaiting eventual receipt of funding for disposal. No government agency wants to get stuck paying disposal costs, which, depending on size, can quickly run into five figures.