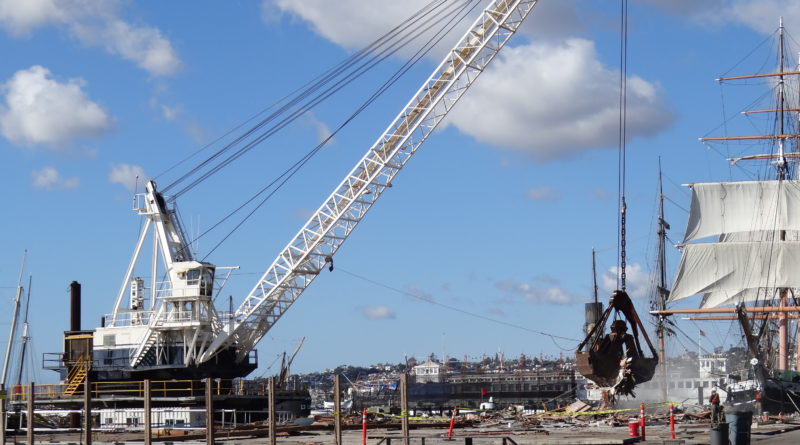 SAN DIEGO — During recent visits to construction sites of those former San Diego boaters’ hangouts, the Red Sails and Anthony’s Fish Grotto, I found myself recalling the Washington, D.C. of my childhood when I watched the city’s Southwest quadrant and Potomac River waterfront fall victim to “urban renewal.” City planners and developers ruthlessly knocked down older, run-down neighborhoods, inhabited mainly by poor minorities, replacing them with soulless, sterile glass-and-concrete blocks occupied by new government offices and sparkling residential towers. Did I mention their unremitting ugliness?

In the process the urban core and waterfront lost most historic structures and its maritime character; only one block of early 19th century rowhouses survived in Southwest while the waterfront was “sanitized” with spiffy upscale establishments.

Are we now experiencing a similar demolition-and-replacement gentrification cycle in SoCal? And why should boaters care?

Other waterfront and marina communities along the coast, including Marina del Rey, also seem afflicted from pressure to eradicate older but cherished properties, now termed “blight.”

Is increasing revenue for government entities the only factor that should shape redevelopment?

What about concerns for the public good? Is evermore development, expedited without adequate citizen and stakeholder input, really what we want for our waterfronts?

What about preserving our maritime heritage? Or protecting open space and waterfront vistas?

In recent years San Diego has lost several much-missed institutions, including Shelter Island’s Red Sails Inn and the Embarcadero’s Anthony’s. Both survived over 50 years serving customers on the waterfront. While different in style, they catered to residents, tourists and boaters.

The two had something else in common: both occupied deteriorated buildings desperately needing major rehabs and updated menus. Now The Brigantine, a six-restaurant locally owned chain, is replacing both eateries.

While many of us still mourn the Red Sails’ loss, I recognized its physical and menu limitations. I’d hoped that The Brig would preserve much of its now-vanishing ‘50s Tiki-style architecture characteristic of Shelter Island, along with much of the Red Sails’ memorabilia, as they originally planned.

Mike Morton, Jr., The Brig’s president and CEO, explained that when they began their renovations, the walls crumbled, the product of age and neglect, requiring a teardown. The additional work delayed their planned opening for their replacement, Ketch Grill & Taps, now scheduled for May/June, 2018.

Despite occasional ranting about redevelopment, I’m not a Luddite, opposed to all change and new development. I support the concept of The Brig and other responsible businesses having up-to-date facilities.

For me the goal is balance: protecting the greater maritime community’s interests, including preservation of our maritime heritage and boating facilities, while also encouraging responsible redevelopment.

We need more open community input regarding SoCal waterfront redevelopment issues – and even effective citizens’ oversight boards in each community, including design and architectural review.

Like many San Diegans, I’m monitoring redevelopment proposals for the Central Embarcadero tract, including Seaport Village. I’m concerned whether the Port’s selected developer, “Gaf” Gaffen, will really protect our maritime history and invest in the Tuna Harbor-based fishermen, now operating their dockside market.

Only through active citizen participation and oversight can we ensure that recreational boaters and the maritime community’s interests aren’t lost in the rush to redevelopment.

3 thoughts on “It’s all about the money: What’s the price of redevelopment?”