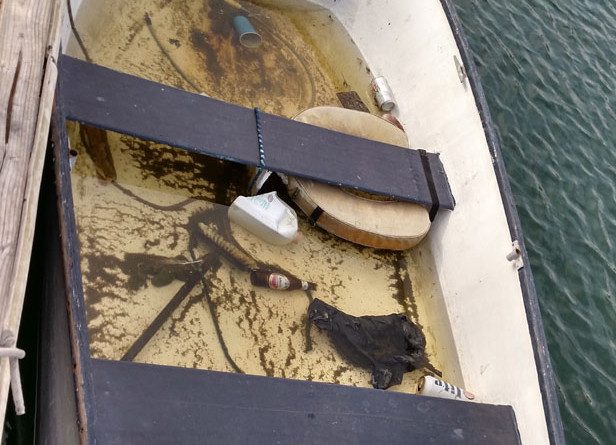 Now that we’ve caught a break after the first El Niño downpours – and do not doubt this was just the beginning, climatologists advise – it’s time to assess what we’ve learned from these storms.

This initial batch caused little damage to boats but created more havoc to boaters’ efforts to check on their vessels. Flooded streets and highways caused unexpected difficulty for many mariners trying to reach marinas. Yet the heavy rains and high winds did point out potential problems, while also making us grateful for our watchful, competent marina staff – as well as liveaboard neighbors – who keep an eye on our boats.

After the storms passed marina staff roved the docks with portable pumps, dewatering small boats and dinghies lacking bilge pumps, ensuring they didn’t sink at the docks. Marinas also laid in extra booms and absorbent materials in case of any oily discharge.

Some boats, including ours, had bimini or canvas ties break loose and flap in the wind, while some sailboats had roller furlers unfurl.

What should you do to prepare for the next El Niño assault?

Check your lines, sails and canvas. San Diego Bay clocked sustained winds of 40-50 knots during one storm, with gusts reaching 70 knots. High winds can loosen lines and canvas ties and shred or rip holes in sails and canvas. Bring inside anything loose or too fragile to survive the wind’s buffeting.

Look in your bilge. Is there more water in the bilge than you expected to see? Do you know where it came from?

Remember that wind-driven rain, such as we experienced in the recent storms, will find unusual paths to enter your boat, even if all your hatches and ports appear tight. These intense rains often fall at an angle or are driven horizontal by winds. Check around any openings for dampness if it’s been a few days since the rain and look for entry points to seal.

Is there standing water on the decks that isn’t draining properly? Remember that standing water can leach through even hairline cracks in the fiberglass and undermine its integrity. Dirt and blown debris can accumulate and block drains.

Be sure to clean out all scuppers or drains so water can freely exit. A clogged drain can force water to flow where you don’t want it. Snakes, spiral wires, a straightened coat hanger or a high pressure hose will usually clear them.

Soon after we bought our current boat, we experienced a downpour that caused water to pour through the escape hatch into the master stateroom. What a soggy mess! Arv, my husband, discovered the gasket around the hatch was filthy – and the internal drain totally clogged. He cleaned and replaced the odd-shaped gasket and bunged out that drain and all the other drains on board. We haven’t had the same problem since.

Returning to the bilge, make sure your batteries are fully charged and ideally are connected to an automatic charger. Otherwise a cycling bilge pump can run your batteries down and your bilge pump won’t work when you most need it. And check whether your bilge pump float switch works correctly, turns on when needed and isn’t blocked by debris or gunk.

If you have known leaks, repair them as quickly as possible using a high-quality, durable marine-grade caulking material. If you’ve just discovered the source of your leak and can’t fix it immediately, you can rig a tarp as a temporary measure, tying it down securely to prevent it’s blowing off.

With care and preventive maintenance, you can avoid most damage from coming storms.