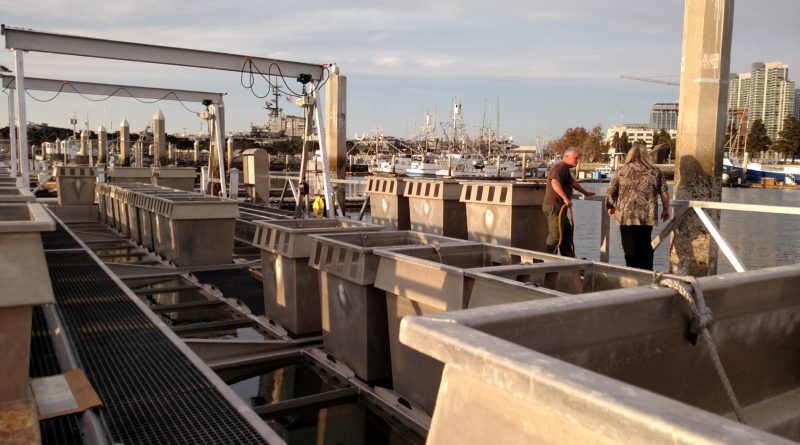 SAN DIEGO — With California again ablaze and so much disturbing current news, it’s sometimes hard to find an upbeat topic for what should be a festive season. Fortunately I recalled a tantalizing news report which I’d never been able to pursue.

Raised outside Washington, D.C., when the Potomac River was effectively dead and too polluted for swimming, I realized in researching this story my mind was caught in an old mindset, assuming urban waterways were still extremely polluted.

I was delighted to discover how wrong I was. Decades of efforts to clean up our waterways and bays have paid off, especially in environmentally-aware California.

The Port’s new oyster nursery project has just kicked off, after intensive planning, with the arrival of a custom aluminum barge with a built-in FLUPSY, or floating upweller system, designed as an oyster incubator. The FLUPSY has removable aluminum baskets with fine mesh screens at the bottom which will contain the seed oysters and enable fresh bay water to flow into the baskets, bringing food and nutrients for the oysters to consume and thrive. The first larval oysters will arrive in the early winter.

I recently met with Paula Sylvia, program manager for the Port’s two-year-old aquaculture and blue technology program and Dennis Peterson, director of operations for their private sector partner, San Diego Bay Aquaculture, both of whom have in-depth experience working in aquaculture. They gave me a tour of the FLUPSY, which is tied to a pier in San Diego’s Tuna Harbor, just off the Embarcadero. They explained the system is designed to incubate bivalves such as clams and scallops as well as oysters and is adaptable for use elsewhere, including open waters and other ports along the Pacific coast.

What I didn’t realize is that there are wild oysters growing in San Diego Bay and throughout our region. Peterson pointed out numerous oysters clinging onto a nearby piling. He explained that San Diego Bay is a natural environment for an oyster nursery.

In the FLUPSY oysters will grow from the seed or larval-stage oysters to the “nursery” stage or from about 2-3 mm diameter to about 20 mm, ready for planting in oyster farms in Northern California or the Pacific Northwest. They expect to grow about a million oysters at a time, flushing and cleaning the oysters daily, ensuring the juveniles don’t clump together in order to produce a high-quality product suitable for eating on the half shell.

The benefit of incubating the oysters in warmer SoCal waters is that they can achieve this growth in about three months compared to about 12 months required in colder northern waters.
This will speed up the process to produce marketable oysters. In warmer waters oysters require 12 to 18 months to mature, while colder waters need up to three years.

Sylvia explained they’ll contract with oyster farms to provide seed oysters and receive the nursery-stage oysters, which feed off the bay’s natural nutrients and help cleanse the waters of any excess nutrients.

They currently have approval and certification only for growing the juvenile oysters, but are thinking long-term.

“We’re trying to identify places suitable for growing to the adult market stage, which will take several years for certification,” Sylvia explained.

If you’re an oyster lover and feature oysters on your holiday menus, this is indeed a cause for cheer.