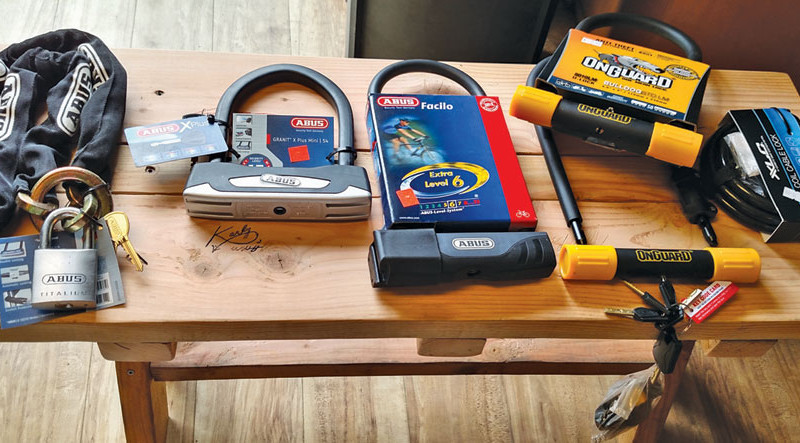 Has your bike been stolen? If so, you’re not alone. Over 10,000 bikes were stolen in San Diego from January 2012 through June 2015, with most taken from the beach communities and downtown.

Bike thefts are rampant, said Lt. Todd Rakos, spokesman for the San Diego Harbor Police, who said most bikes are stolen from racks by bolt-cutter equipped thieves. Others see these as crimes of opportunity, with thieves grabbing casually stowed bikes or snipping lightweight cables.

Many marinas, tired of thefts, have removed their bike racks or moved bike storage to secured areas.

“Ever since we got rid of the bike racks there hasn’t been a bike theft,” explained Adam Veves, Kona Kai Marina’s dockmaster.

Veves, an avid cyclist, advises tenants to store bikes inside their boats or storage lockers and to buy a sturdy lock — and to lock bikes, even inside. Too many people, he explained, buy an expensive bike and cheap lock and then leave it in easy view of the road.

While bike thefts are common, most are preventable. More stolen bikes could be returned to owners with a few preventive measures, Rakos explained.

“Most people don’t bother to write down their bike’s serial number. We like to be able to return owners’ stolen property,” Rakos said. SDHPD arrests someone caught stealing bikes at least every other week, he added. Without a recorded serial number, they have no way of reuniting the recovered bike with its owner.

Serial numbers are stamped into the bike’s underside. Most responsible bike shops include serial numbers on receipts when they sell them, explained Micheangelo — who prefers a single name — of Bicycle Discovery, located at 742 Felspar St., Pacific Beach. They retain serial number records and can look them up in case of loss.

A good local bike shop can also guide you to the right type of lock for your needs.

David Jackson of Cheap Rentals, like Lt. Rakos and many cyclists, recommends using a heavy U-lock for greater security. U-locks, Jackson explained, come in different sizes, weights and sturdiness, with keys or combination locks. Some are harder to cut, but all can be smashed with a sledge hammer. U-locks range in price from about $40 to over $100 for the hardiest versions, while a basic cable and padlock costs about $15. Tougher still is an encased heavy-link steel chain lock.

Wherever you leave your bike, aboard your boat or elsewhere, lock it up to prevent theft. Jackson, who’s given considerable thought to bike theft prevention, suggests investing in a Bluetooth Tracker Tile, which enables owners to locate Tile-equipped objects via a smartphone app. The device, about 1.5 inches square and sold online, is concealable in a bike frame or seat.

Mike Waters, a sailor who bikes everywhere, took a different route. While he owns both cable and chain locks, he painted his bike to make it look unappealing. He also disables his bike by inserting a small metal rod (or trimmed nail) into the brake lever, which once prevented its theft.

Keep a photo of your bike on hand with its serial number. If it’s stolen, notify police and look on Craigslist and at swap meets — but don’t be a hero and risk your safety. Search the neighborhood, too, in case an opportunistic thief chained your bike to a sign post for later retrieval.

These common-sense recommendations might help protect your bike from theft.