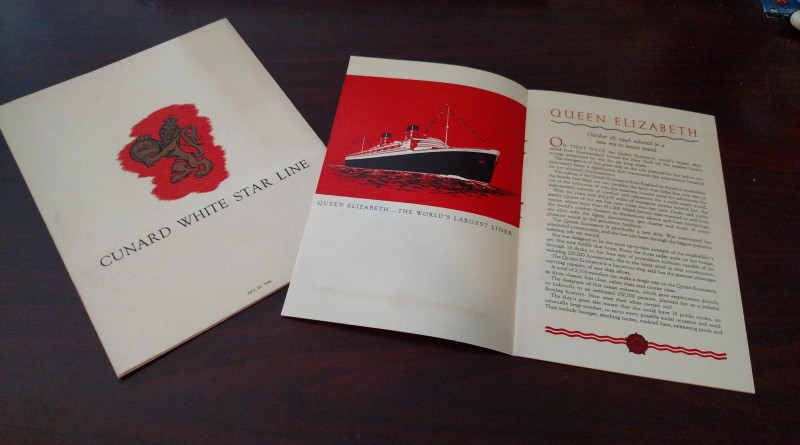 Hearing the sad news of the dire physical condition of the Long Beach-docked Queen Mary – which I confess I’ve seen from afar but not yet visited – brought back near-forgotten memories of my adventures on her sister ship, the RMS Queen Elizabeth, on her second to last transatlantic crossing in September1968.

The grand lady of the sea, launched in 1938 four years after the Queen Mary, was my “ride” to my first year of college.

If this tale seems archaic now, it felt like a throwback to an earlier, more elegant era back then.

My unlikely voyage developed from the need to transport my steamer trunk to London University.

I’d always dreamed of crossing the Atlantic by passenger liner, but it seemed an impossible fantasy. Yet once my mother, who shared my romance with lovely ships, calculated the cost of shipping my old school trunk and plane fare from Washington, DC to London, the idea of sailing on the Queen Elizabeth seemed downright economical, not extravagant.

By the late 1960s it was clear the era of the passenger liner was ending, replaced by air travel  ̶  my usual transportation to and from my English boarding school.

The whole adventure was a step back in time, beginning with the train trip with my parents to New York along rickety rails that rattled the dining car china and slopped coffee into saucers as we dined on freshly scrambled eggs. On arrival at the docks, porters took my trunk to the hold and my suitcases to my (second) class stateroom cabin. The size of the massive ship, though small by today’s standards, overwhelmed me. The vessel’s send-off, complete with streamers and confetti tossed from guardrails, was worthy of a schmaltzy old movie.

Soon after leaving port we learned Cunard was retiring the Queen Elizabeth following another crossing and an around-the-world voyage, just as they’d retired the Queen Mary the previous year. Both ships would be replaced with the more economical and smaller Queen Elizabeth 2.

My fellow travelers proved a motley lot. In addition to the expected retirees enjoying a leisurely crossing, there were many students like me who’d found a good deal. One brash student, bound for medical school in Belgium, even brought along his new Mustang, that year’s Indianapolis 500 Pace Car.

“The Beautiful Lady,” as she was called, by then was showing her age and slap-dash maintenance. The once legendary dining rooms’ cuisine suffered from the poor morale of staff awaiting imminent layoffs. However each morning we woke to the ship’s printed newspaper, summarizing the outside world’s headlines, slipped under each door.

The Cunard liners still officially had a rigid class system, but, because the ship was being pulled off service, class divisions had broken down and were relevant only in dining rooms. My group of new on-board friends went from party to party, lounge to lounge, ignoring unenforced class restrictions.

During breezy days I braved the cool saltwater swimming pool and chilly sea air and enjoyed long promenades along the decks. Every night the officers hosted parties, inviting all the single girls, the perfect setting for a shipboard romance that seemed to last forever.

Arriving in Southampton was akin to stepping from a time warp. After five days on board, surrounded by varnished wood and service of a bygone era, I tearfully said goodbye to my fling with the ship’s engineer and boarded the boat train headed for London and a new phase of life, sad to depart my fairy-tale-land.

I bawled when I learned she’d burnt and sank in Hong Kong Harbor in 1972, and I would never see her again.