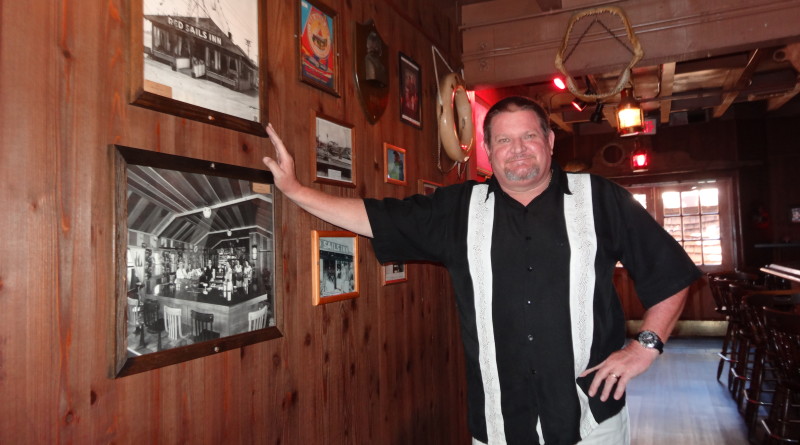 Current Red Sails Inn owner Bill Dargitz poses with early photos of the Red Sails Inn at its original location on the Embarcadero at G Street, where it operated in the 1920s and ’30s. The restaurant will close its doors on Aug. 31 after a nearly 60-year run at its Shelter Island location. New owners The Brigantine Inc., which operates two other restaurants nearby, will remodel the restaurant and reopen it as The Ketch.Capt. Nicole Sours Larson photo

If you, like me, are concerned at the galloping pace of the Port of San Diego Board of Commissioners’ efforts to redevelop so much of the San Diego waterfront — seemingly with little public input — news that the Red Sails Inn on Shelter Island is closing after nearly 60 years is troubling. The Red Sails will serve its final meals Aug. 31, when the sale to The Brigantine closes.

A funky but endearing fixture of the “working waterfront,” patronized by generations of boatyard workers plus boaters of every stripe, the memorabilia-laden Red Sails Inn moved to its current location on Shelter Island in 1957 from downtown, following an earlier incarnation along the Embarcadero that opened in the 1920s.

Current owner Bill Dargitz reluctantly relocated from Seattle 23 years ago to help his father, Jack, run the Red Sails three years after Jack had bought half interest in the venerable restaurant. Dargitz, now 54, had grown up in and around Jack’s restaurants and made a career in the hospitality industry. Red Sails and San Diego quickly became home; gradually he bought out his dad’s partner. Jack, 77, retired eight years ago but retains an interest in the restaurant.

Customer loyalty is a hallmark of the Red Sails, many of whose patrons come several times a week or return on regular visits. That’s how I first experienced the Red Sails. My husband, who’d discovered the restaurant as a Navy midshipman, introduced me to his sentimental favorite on my first San Diego visit.

“The cool tradition is that we have people come here with little kids who say ‘I was this big when I first came here,’ ” Dargitz recalled.

Selling the Red Sails is bittersweet for both father and son.

Dargitz had hoped the new Brigantine owners would retain the name, which conveys with the sale, as does much of the memorabilia. Instead they are rebranding it The Ketch, first of their newest chain. The Brig owners have pledged to give Red Sails’ employees, many of whom have worked there for decades, priority in hiring when the restaurant reopens after an extensive remodel, but the staff is justifiably anxious after the shock of losing their jobs.

Rumors of a sale had long swirled around Point Loma. The Dargitzes’ decision to sell was triggered by Anthony’s losing its lease on the Embarcadero location after 50 years.

“The port seems to put everything up to bid now. That scared us,” he said, remarking that they’d almost lost their lease last time, but were saved by the arrival of new port negotiators who appreciated the restaurant’s long tradition.

Although 12 years remained on their lease they feared losing the entire value of their business if they waited to sell.

When the Red Sails pours its last drink on Aug. 31, San Diego will lose yet another slice of its rapidly dwindling maritime heritage, along with all the closed old joints, marine businesses and much of Shelter Island’s disappearing Tiki-inspired architecture.

The Red Sails was an unpretentious, comfortable boaters’ hangout that was, yes, badly in need of a facelift. Yet the loss of this icon represents much more than the closure of just another restaurant: it’s another milestone in the loss of our maritime heritage.

So much of our history has succumbed to the mostly charmless, undistinguished tourist facilities the port has foisted on us for “enhanced revenue.”