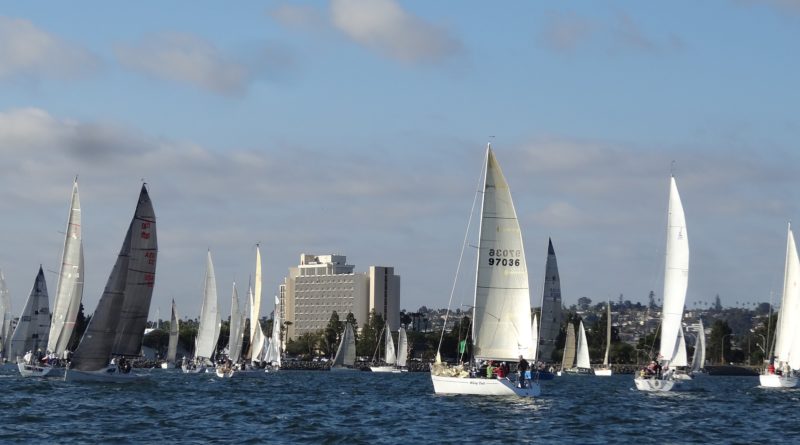 SAN DIEGO—We’ve all seen them: the stupid or ignorant boaters with an outsized sense of entitlement who think their right to watch a boating event close-up trumps participants’ right to safety and, potentially, even survival.

Every year Arv and I look at the many sailboat races and marvel at some boaters, usually on smallish speedboats, but sometimes on larger craft, who decide they need an intimate view of the action. They dart between and around event participants, even hugging their sterns, oblivious to any danger to a sailor fallen from a heeled-over vessel.

Speedy hydrofoils and other high-performance sailboats pose a particular risk, since a fast-moving boom can easily knock someone into the water. The victim might recover quickly and assist with the rescue. But what if that person suffers a serious injury from the boom, as happened to a friend’s son. (Incidentally, his body was never recovered.)

And if – as a colleague recently recounted – a motorboat operator trails a racing hydrofoil or sailboat too closely and a sailor tumbles into the water, he’s vulnerable to being run over.

This happens frequently in other races and maritime events, whether local yacht club sailing regattas, Beer Can Races, America’s Cup trials, Festival of Sail parades or even the Parade of Lights.

Every year, as we watch the Parade of Lights on San Diego Bay, we see boaters pushing within the parade route perimeter. Parade volunteers and harbor police chase the offending boats away. Invariably some creep back, while others, usually small motorboats but also kayaks, decide to “join” the parade by tailing parade participants too closely. What makes this more dangerous is it’s always dark during the Parade of Lights, making collisions potentially more hazardous. What if these looky-loo operators happen to also be drunk or high on drugs? Controlling the boat, in such a circumstance, would both difficult and illegal.

So what’s a responsible boating observer to do?

Stay back at least 100 feet from any boat on the water, unless you’re engaged as a support vessel – and be vigilant. Then if someone falls or is knocked off a vessel you’ll have space and time to react and even be able to assist with a rescue.

It’s especially critical to stay well away – at least 100-200 feet – from swim zones and be alert for fallen water skiers in water ski areas. Too often on Mission Bay we’ve observed downed skiers almost run over by speeding powerboats and personal watercraft because inattentive operators aren’t watching for people in the water or any other hazards.

California boat regulations regarding speed are clear – “the maximum speed for motorboats within 100 feet of a bather (but not a water skier) and within 200 feet of a bathing beach, swimming float, diving platform or lifeline” or passenger or boat landing is 5 mph.

Always be careful to limit speed and avoid weaving between boats in anchorages. One of my least pleasant boating memories is being anchored in a quiet cove on the Chesapeake Bay when several yahoos on PWCs buzzed us repeatedly, setting our boat rocking and disrupting our planned quiet meal. Eventually we just hoisted anchor and departed to escape the harassment.

Because our boat throws a large wake, even at relatively low speeds, we also attract wake-jumpers who come frighteningly close to our boat. We always slow down to discourage them. Neither of us wants an erratically operated PWC to ram us.

With prime summer boating season fast approaching, be sure to remind your family and crew to stay alert and maintain safe distances from other vessels and swimmers to ensure everyone remains safe all season.