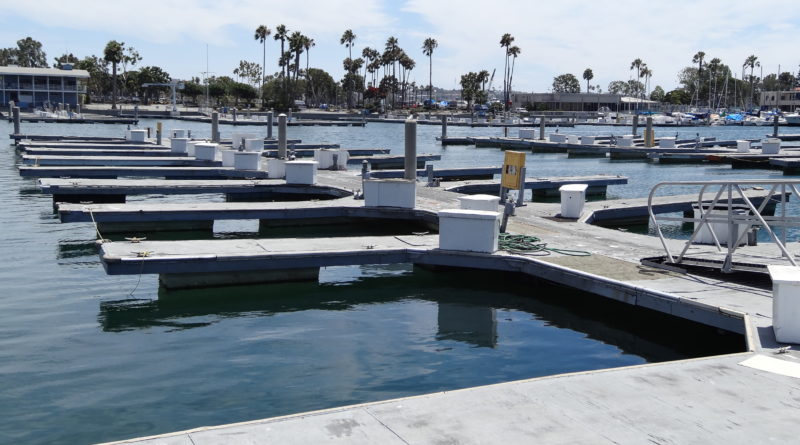 All along the California coast, the story repeats: local officials announce plans to redevelop marinas and waterfront districts, usually increasing the number of larger slips and decreasing small slips. Sometimes, like San Pedro’s Ports O’ Call Marina, docks are demolished and not replaced.

Yes, it’s important to maintain and renovate marinas. And yes, boats are getting larger and all need somewhere to dock and call home.

But what about the little guys, the people with the “starter boats” in the 20- and 30-foot range? Where do they go when they’re displaced?

In July, Arv and I were in Los Angeles and stopped in Marina del Rey, one of his favorite old haunts. We drove around looking at marinas, as we often do. Seeing many empty docks and older marine businesses closed for demolition and reconfiguration brought this issue home.

I’ve read the “official line” repeatedly from every locality where this occurs: we’re committed to maintaining a supply of boat slips of all sizes, including smaller lengths. Yet somehow when the number of dock slips plunges by a quarter to a third, it’s always the smaller slips that disappear and the docks accommodating larger yachts and megayachts that miraculously expand.

Does anyone care about regular boaters, the guy with the runabout or fishing boat he cherishes or the family with the small cruiser or sailboat representing their escape from everyday stresses? Or the newbie boater every yacht broker seeks who’s just getting into boating with a beginner-sized boat before graduating someday to a larger yacht?

The traditional advice is to lobby your local government officials to protest the changes. But many boaters don’t live or vote where they keep their vessels and don’t have a voice. Why would a SoCal elected official listen to a displaced “little boater” who lives out of district when there’s the potential for more money from a megayacht owner and crew?

Is boating, long a middle-class pursuit, doomed to become the preserve only of the rich?

It isn’t just marinas that are squeezing out boaters and maritime interests.

A few years ago, San Diego’s Shelter Island marine businesses were threatened with eviction because Port District’s commissioners wanted to “spruce up” the island to attract more lucre from the all-mighty tourists. Gleaming white yachts docked at marinas might be acceptable eye candy for tourists, but grubby businesses like boatyards, engine mechanics and other marine services essential to supporting the boating community needed to go. The Port wanted to “sanitize” the island, squeeze in more hotels and maximize its revenue.

Land and money grab, anyone?

Fortunately, that proposal was shouted down and the Shelter Island marine industry continues to thrive, despite gentrification. Still we are losing our maritime inheritance and our older, more historic structures, not just in San Diego but in every SoCal coastal community.

Readers still stop me to talk about the column I wrote last year about the demise of The Red Sails and the galloping loss of our maritime heritage, including Anthony’s on San Diego’s Embarcadero. Both restaurants, admittedly needing upgrades, had survived over 50 years before succumbing to “new concepts” from the Brigantine Group.

San Diego’s waterfront, like many, is about to change more radically as Seaport Village (along with currently vacant sites on Harbor Island and by the airport) is redeveloped.

Why the haste to redevelop everything at once, I asked a friendly port commissioner.

“We need to maximize our revenue,” he responded.

Maximizing revenue comes at the expense of the very character of our waterfront and against the interests of middle-class recreational boaters.

It’s time to slow down and listen to the public’s wishes.

One thought on “Who’s looking out for recreational boaters’ interests?”