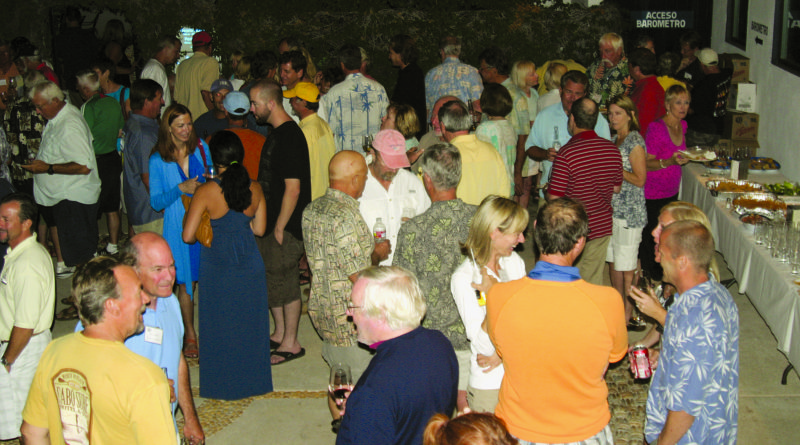 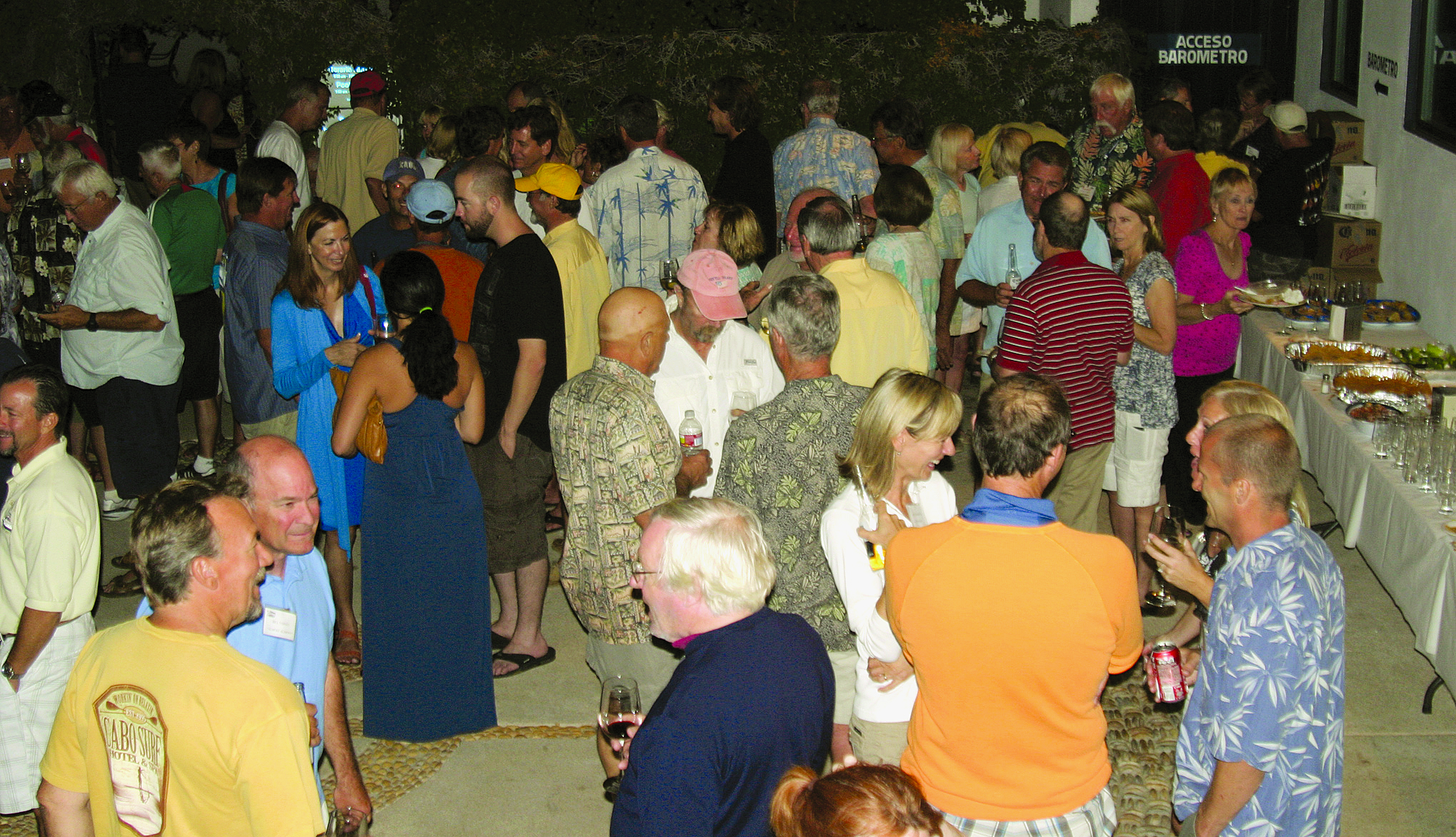 Most of the FUBAR’s 38 powerboats had reserved slips at IGY Marina Cabo San Lucas for two or three nights, and IGY dockmaster Darren Carey found space for all of us showing up the same morning. Our Selene got a choice end-tie on K Dock, an easy in-and-out slip with a great view of the harbor action. A few of the FUBAR boats opted for slips in Marina Puerto Los Cabos, 16 miles to the east at San Jose del Cabo.

Before dawn the next morning, the fuel dock at Cabo San Lucas was jammed with at least 100 sportfishing boats, all heading out for what was reported to be a spectacular day of fishing.

Exploring ashore, I was amazed how busy the downtown shopping districts and hotels were, at both Cabo San Lucas and San Jose del Cabo, considering how quiet Ensenada had been 10 days earlier. Mexico’s big Chedraui grocery and department store chain has bought up several older grocery store chains in southern Baja California, and new stores have opened, so provisioning was hassle-free. The streets and stores were already decorated with Christmas lights and trees.

That night, IGY Marina Cabo San Lucas, which is one of the FUBAR sponsors, invited all “FUBARistas” to a big party at its private patio and pool behind the marina office. We enjoyed dinner, tequila tasting, live music and dancing under the stars.

Around the pool, boaters I sat with said that all these posh amenities and good weather were helping to relieve any leftover stress they had built up while bashing down the outside of the Baja California peninsula. The next day we were off on another adventure.

Cabo Riviera Resort at La Ribera on East Cape had graciously invited the whole FUBAR fleet for a visit for the next two nights. Located about 17 nautical miles up the East Cape coast from Cabo Los Frailes, this new marina is not yet open to the public. My GPS approach waypoint half a mile off Cabo Riviera’s new jetties is 23°36.62’N, 109° 35’W.

Even though Cabo Riviera’s interior marina channels were not yet completed, the developers had halted construction for three days to prepare for our arrival, dredging three anchoring basins, building seawalls for Med-mooring and — just in time — unplugging the entrance channel.

All the boats were lined up outside, preparing to go in one at a time. Orion was first to enter behind a pilot panga and came to anchor. Unfortunately, the second boat went aground in soft mud. With slightly less than a 6-foot draft in a reportedly 9-foot-deep channel, Orion quickly backed itself out and had no damage. But after that, most of the fleet with deeper drafts opted to wait and see before entering.

Not to be so easily deterred, however, Brown-Eyed Girl (at 28 feet, the smallest in the fleet) and CJ (a 42 Californian that was no lightweight) proceeded into Cabo Riviera Marina. Several other FUBAR boats simply anchored outside the jetties and went in by dinghy to check it out.

For their bravery, these adventurers were rewarded with two days and nights of complimentary moorings, food, drink and festivities at Cabo Riviera’s beautiful beach club and golf course.

When this marina is completed and open to the public in 2012, I think it will be very handy and popular as a stepping-stone for rounding the East Cape from Los Cabos to La Paz, and a good landfall when crossing from the mainland. However, we were among the deeper-draft boats that had to move on.

Muertos Cove, about 85 miles beyond Cabo San Lucas, was named for the dead-man moorings left by 1920s mining operations. Today, it’s a pretty anchorage with north-wind shelter at its northeast end, but it may be better known for the Los Sueños residential development at the south end.

When the FUBAR fleet arrived at Muertos, the wind was from the west with no swell, so we rode to anchor very well for up to three nights. The 30 boats that didn’t visit Cabo Riviera had arrived at Muertos two full days earlier than expected. Even though the schedule had changed a bit, we were looking forward to a dinner sponsored by Los Sueños Resort and a tour of the fabulous Train Room.

A voice on the VHF radio called out, “Water taxi, water taxi, this is the white powerboat at the north end. We’re ready to go ashore now. We’ve been waiting and calling for five minutes. Come pick us up!”

Muertos Cove is where some of the first-timers finally realized that not every little anchorage in Mexico provides water taxi service in hopes that yachts may show up. First-time FUBARistas might have easily assumed that was the case, because at Bahia Tortugas (Turtle Bay) and Bahia Magdalena (Magdalena Bay), the fleet’s organizers at Long Beach Yacht Club had hired pangueros in advance to shuttle us to shore and back, so we didn’t have to land our dinghies on the beaches.

In fact, Los Sueños had hired some pangueros to provide this shuttle service for the night of the resort’s shore party — but not for the three days in advance of that event.

Some of us anchored around the corner at Punta Ventana de la Arena, off its beautiful 6-mile-long beach of shimmering white sand. I noticed that the elegant old lighthouse on the east tip of Punta Ventana had gone dark, replaced by a new light tower standing alongside it. The new Ventana Light blinked faithfully all night, as did the two lights on the west side of Isla Cerralvo.

The mile-wide San Lorenzo Channel is marked by two new buoys. The distance between the north side of the La Paz Peninsula and the south side of the Espiritu Santos islands is more than 3 miles, but shoals foul all but the middle of the gap. The smaller buoy to the north is difficult to pick out, even on radar when lots of small boats are zooming in and out.

My GPS position in the middle of the San Lorenzo Channel was 24 degrees, 22.54 minutes north latitude; 110 degrees, 18.5 minutes west longitude — and the water depth was about 50 feet. From this location, it was about 10 miles north to Partida Cove on the islands, or 10 miles south to reach the channel into La Paz Harbor.

On our approach to La Paz, I noted that the navigation light standing on Punta Prieta is not easy to see. Three better landmarks are two red-and-white stacks, a cluster of eight round white tanks and the brilliant green of a golf course above the marina that lies just east of the point. Use caution when rounding the south side of Punta Prieta, to stand outside the ship mooring buoys that often ride about 250 yards off the land.

Marina CostaBaja’s lighted breakwater entrance was encumbered, as it often is, by rusty hulks anchored off the boatyard next door, which isn’t the most courteous neighbor. But we zigzagged our way to the marina’s 300-foot guest dock, which is to port as boaters reach the marina’s first basin.

If we were going into town, we’d have entered the narrow La Paz Channel, which starts right outside Marina CostaBaja. But this was our final destination with the FUBAR.

Dockmasters Gabriel Ley and Lupe Gonzales cleared our papers in the marina office just east of the dock — and while all the other FUBAR boats trailed in, we filled up our diesel tanks at a generous FUBAR discount. Fly-in guests got rooms at the resort’s newly renovated hotel, which stands between the outer and inner yacht basins.

At FUBAR 2011’s grand finale dinner in the resort’s rock auditorium, awards were handed out by Ed Cox and Don Hudzietz of Long Beach Yacht Club, Wayne Hilbig of Marina CostaBaja and Christine Alhambra of PassageMaker. The next morning, I gave a seminar about Cruising the Sea of Cortez; and the following day, Marina CostaBaja put on a huge Thanksgiving feast.

Plans are already under way for the next FUBAR Odyssey, to be held in 2013.