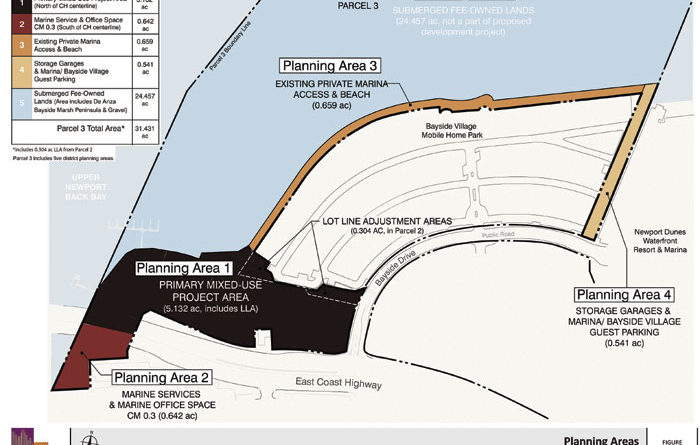 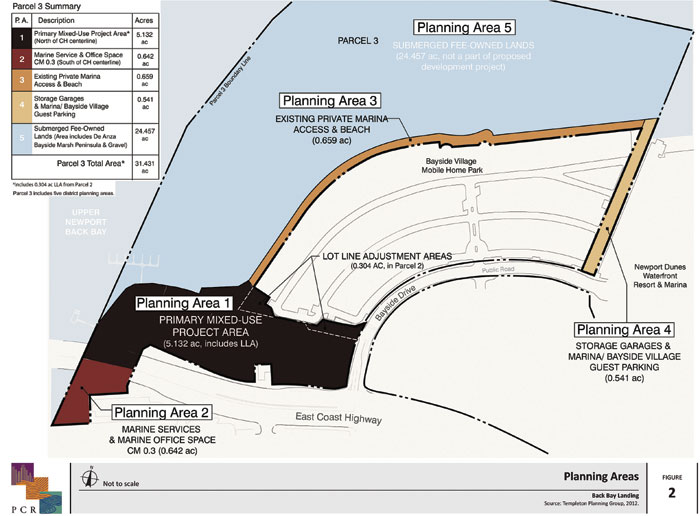 NEWPORT BEACH — A proposed waterfront development project would bring a 140-space dry stack storage facility to Newport Harbor’s Back Bay, if approval is gained to transform a site currently being used as parking lot storage for RVs and boats.

The project applicant, Bayside Village Marina, is proposing to bring an enclosed vessel storage unit to the city’s waterfront to replace a 170-space long-term storage lot on a 7-acre parcel near the Pacific Coast Highway Bridge and Bayside Drive.

“This project, really, is a redevelopment of the property,” said Gordon Craig, project manager. “This property has been one of those that you really don’t pay attention to. It’s an important parcel to Newport Beach, and we want to do it right.”

The project, known as “Back Bay Landing,” would develop 32,000 square feet of land with a mixed-use residential and retail center, which includes restaurants, marine services, 49 residential units, a parking structure, a large enclosed dry stack boat storage building and a view tower.

Now being referred to as the “boathouse,” the 140-space storage facility would replace the long-term storage lot that currently houses more vehicles and RVs than boats on trailers. The application envisions the 35-foot storage facility would hold boats ranging from 20 to 40 feet in length. A Higgins lift system would pull each vessel from a rack shelving system and drop the boat in the water.

“Vessel owners will just call and request their boat be put in the water,” said Craig, who envisions being able to provide boat provisioning services to customers.

Michael Gelfand, president of Terra Vista Management, which operates the Bayside Village site and Newport Dunes Resort, said boat owners would typically need to provide only an hour’s notice before meeting their boat, launched and ready to cruise.

The crescent-shaped site, which has been owned by the Gelfand family since the 1970s, currently houses a long-term storage lot for RVs and boats, and a parking lot for Bayside Village Marina. Kayak and paddleboard rental companies also lease space on the site — and just a few feet off shore is a barge that houses Pearson’s Port seafood.

Since the Gelfand family also operates the adjacent mobile home park, the plan is to transfer unused residential density from Bayside Village mobile home park to the new development.

When completed, the area will be a destination for the public and the boating community, Craig said. “We really want to enhance the provision of public access along the shoreline.”

The project intends to “create linkages” by providing a 12-foot pedestrian waterfront walkway that will run south of the Coast Highway Bridge, where Balboa Marina is located, to the north end of Bayside Village mobile home park.

An added draw to the village would be a 55-foot-tall tower built to Americans with Disabilities Act standards, designed to provide public access to a top-level viewing deck for scenic views of the bay.

Parking for the marina, boathouse and landing would be maintained in a parking structure, with some surface parking.

With the project still in the beginning stages, many boaters and other residents are only now becoming aware of the plan. They expect to hear more “specifics” once the Environmental Impact Report and conceptual plans are presented to city.

“We would be for any reasonable project that enhanced access and use of tidelands to more users,” said Bill Moses, president of the Newport Mooring Association. “Hopefully, De Anza will be mindful and sympathetic to the various commercial entities that now use that area for storage and launching of working vessels.”

The project would continue to provide space for Pearson’s Port, as well as kayak and stand-up paddleboard rental opportunities, Craig said.

The project has many steps to complete before it can break ground, Craig said.

In order to construct residences on the site, the applicant is required to obtain a land use amendment to the city’s general plan the local coastal plan. The parcel’s current designation is that of marine commercial, and it would need to be changed to a mixed-used designation.

Craig said that land use designations could be approved by the city and the California Coastal Commission by 2014. A Coastal Development Permit would then need to be obtained, which requires approval by Coastal Commission and the city. Craig estimates that 2016 is the earliest date that construction could begin on the project.

A Draft Environmental Impact Report is scheduled to be released in May for review and comments. Craig estimates the project will go before the city’s Planning Commission by the end of September, then would go on to the city council.