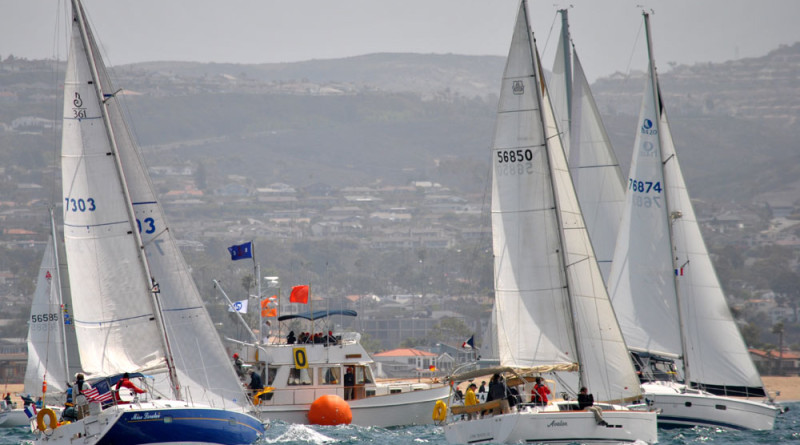 First time racers will compete in the annual Newport to Ensenada International Yacht Race in April alongside several repeat competitors who have been participating in the regatta for several years. Laurie Morrision for NOSA photo.

NEWPORT BEACH — The historical Newport to Ensenada International Yacht Race appears to have overcome its rough patches of low boater turnout with race officials anticipating upward of 240 participants in this year’s race scheduled for April 22-24.

For the first time in a long time the sun has begun to shine once again on the race that has battled low boater turnout tied to a bad economy, the swine flu, cartel violence, a rival race, a deadly accident and a washed out road to Ensenada.

Newport Ocean Sailing Organization’s (NOSA) Board of Directors – host of the race –believes things are finally looking up.

“We are on a nice growth spurt,” said NOSA Commodore David Shockley about the uptick in race entries. “We are reaching additional sailors and expanding our race offerings.”

Entries for the 125-nautical-mile race were in decline following 2008 due to the recession, the launch of the rival Border Run regatta and a tragic accident in 2012 that killed all four crew members aboard the 36-foot Aegean sailboat – the first fatalities in the race’s 65-year history. There were also concerns of violence in Mexico and the more than 300 boats in marinas impounded in 2014.

The race experienced an all time low in 2010 with only 175 entrants.

NOSA officials quickly began to work on luring sailors back to the popular race, which hit a high of 675 entrants in 1983 and typically stood at 300 to 500 entrants each year, by discounting the entry fee, working with Mexican tourism officials, and holding seminars on how to purchase the 10-year Temporary Import Permit. In 2011 the race’s starting line was moved to just off the Newport Pier and the finish lines were moved as was the after-party from downtown Ensenada to Hotel Coral and Marina, a gated hotel with a marina.

“The hotel overlooks the bay; you can see the boats coming across the finish line and racers can bring boats into a marina” said Peter Bretschger, chief marketing officer for NOSA. “It adds to the camaraderie once down there.”

NOSA also responded to a report’s findings on the potential cause of the Aegean crash, which cited lack of an adequate lookout and led to the boat bypassing a marked waypoint, by adding new rules for sailors in hope of preventing any chances of a repeat incident. Rules now require all racers monitor VHF Channel 16 during the race; a minimum of two lookouts on deck at all times, and boats in the cruising class are not allowed to launch the autopilot when the engine is running.

There are also more race courses to choose from.

“We’re looking forward to creating as inclusive an environment as we can, to allow more boats to participate and enjoy the excitement, competition and camaraderie of overnight coastal racing to beautiful Ensenada, Mexico,” Shockley said in a statement.

Racers can now select from three-race course options and classes divided into Maxi, PHRF, Multi/ORCA and Cruising. The main race is scheduled for 11 a.m. on April 22 with classes starting every 10 minutes, while the short course will start the same day but at 5 p.m. off Shelter Island in San Diego.

Southwestern Yacht Club will host pre-race events in the San Diego area for racers about to sail on the new 62-nautical-mile course that ends in Ensenada. The short course will be a San Diego PHRF rating of 50 or higher.

NOSA also experimented with an alternative course last year in conjunction with the Transpac 2015 Race to allow for a longer 150-mile course around San Clemente Island as a qualifying race.

The association’s hard work has begun to pay off as last year’s race witnessed a growth in numbers with more than 175 boats participating in the race.

Several first time racers have already signed up – indicating the past is in the past.

“We had almost 40 new boats last year, and I think that shows we are turning the corner of safety concerns in Mexico,” Shockley said.

Officials are also expecting more people to make the drive down to Ensenada to meet the racers, which will only help to increase the experience, Bretschger said.

“We have not heard any concerns about going down to Mexico this year as we have in the past,” he said. “It’s as though everything has been lifted.”

Wayne Hopkins, of Ventura, had no hesitation signing up for the race despite a Travel Warning for Mexico updated on Jan. 19, 2016 by the U.S. Department of State warning U.S. citizens about the risk of travel to certain places in Mexico.

“Exercise caution in the northern state of Baja California, particularly at night. According to the Baja State Secretariat for Public Security, Tijuana and Rosarito continued to experience an increase in homicide rates from January to October 2015 compared to the same period in the previous year,” the U.S. Department of State warning reads.

“While most of these homicides appeared to be targeted criminal organization assassinations, turf battles between criminal groups have resulted in violent crime in areas frequented by U.S. citizens. Shooting incidents, in which innocent bystanders have been injured, have occurred during daylight hours.”

Hopkins, who will be racing on his Fisher 34, Mistress Mine, is not concerned for his safety.

“I do a lot of business in Mexico; it feels safer,” he said. “Ensenada is a well-run port. The race organizers do a really good job of helping racers check in; we were able to rent two slips in advance that will be ready for us.”

Hopkins will race alongside daughter, Ashley, who is also competing for the first time in her Merit 25, Swell. The senior in college will race with an all female crew.

He is more concerned with his daughter’s safety on the water than what can happen once in port.

“As a father there’s a healthy concern but I have to trust her training and her experience,” he said.

Hopkins was initially drawn to the Ensenada race after competing in the Islands Series. “It got us thinking about doing something longer and offshore instead of going around buoys.”

As for first-race strategies, Hopkins’s is keeping it simple: “I’m open to have a good time,” he said. “It’s just the experience of it.”

The camaraderie keeps Bretschger coming back for more. This year marks his 18th year participating in the regatta with his crew ranging in age from 14 to 61 aboard Adios.

“We have done everything but win,” said Bretschger who came in fourth in 2015. His wife has participated in 16 of the 18 races, and two of his crew has been with him for eight years.

This year the team plans to sail just outside the Coronado Islands in hopes of making a good break down to Ensenada.

For Bob Siemon, 65, and team aboard his Beneteau Oceanis 38, Sundaze, the race is a bucket list item that many are excited to finally experience.

“What intrigued me about the Newport to Ensenada race is that it is open ocean racing and it’s a nice long haul,” said Siemon, who grew up sailing and set a goal for himself in 2015 to compete in this year’s race. The first step was purchasing the boat from South Coast Yachts; the next was putting together a crew.

First timers include Siemon, Beneteau sales professional Jody Krimstock, and local lawyer and friend Ray Lee. Two experienced racers, including Roger Floyd who just completed the 2015 Transpac, round up the crew along with Siemon’s son Caleb, who attended a sailing academy growing up.“It’s a neat thing to have my son involved,” said Siemon. “That was one of the hugest motivations for me to do this.”

The team plans to continue to attend NOSA’s free seminars and get out on the water as much as possible until race day.

“The whole team is looking at it as an adventure, almost a bucket list thing; a lifetime adventure,” said Siemon. “We want to do everything we can to place in our Cruising Division but we also want to have a good time.”

Shockley offers a few words of advice to those still on the fence about joining in the 69th annual race: “This is an opportunity to do something special and you shouldn’t let it pass you by,” he said. “Become part of the tradition.”

Pre- and post-race parties are scheduled with a new social gathering scheduled prior to race day where race boats will be on display. Visit newporttoensenada.com to register or to learn more about the schedule of events.

• Taxi Dancer with an R/P68 rating of -84 from Santa Barbara Yacht Club, the fastest boat entered at press time

•The fastest ORCA multihull entered is Uni, a Seacart 30 trimaran.