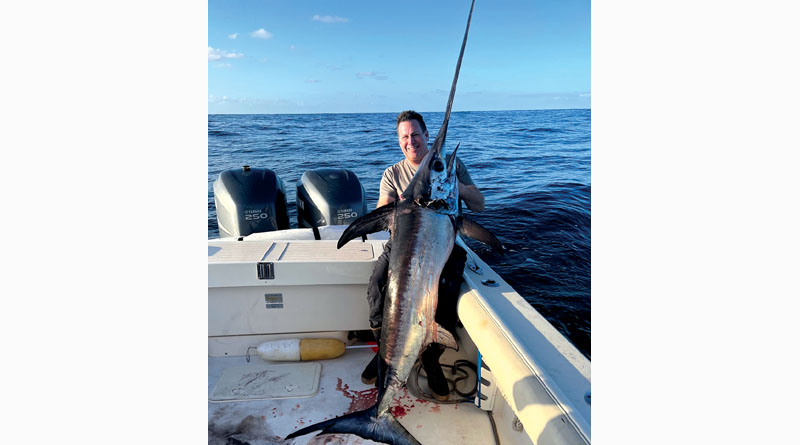 SAN DIEGO一 Southern California offshore anglers saw a series of storms move through Southern California during the late part of December, but the weather cleared as the New Year approached allowing anglers to get back out on the water and do some fishing over New Years weekend.

I know of no boats that tried to fish offshore waters for tuna and swordfish.  Before the series of recent storms, there were good numbers of 20 to 35-pound bluefin tuna biting at the Tanner Bank and there was also a chance at catching a swordfish via the deep drop method while fishing at the 9 Mile Bank and the 178 Spot.

It is a similar story out at the 9 Mile Bank and the 178 Spot with what was 61.5-degree water before the storms dipping to 59.5 degrees.  Maybe someone will go out and try the Tanner Bank, 9 Mile Bank, and 178 Spot to see if there are still some bluefin tuna or swordfish around. Even with 58.5 and 59.5-degree water, it would not surprise me much if there were still some bluefin tuna to be caught at the Tanner Bank and some swordfish to be found at the 9 Mile Bank and the 178 Spot.

There have been no recent reports about surface fishing around Los Coronado Islands with few if any boats out giving it a try. There have been some boats fishing for assorted bottom fish species at hard bottom areas to the north and the northwest of North Island that have been catching a good mix of reds, salmon grouper, and assorted rockfish.

New Seaforth out of Seaforth Sportfishing has started to run extended half-day trips to fish for rockfish in Mexican waters during the annual two-month rockfish and groundfish closure in U.S. federal and California state waters, which went into effect on Jan. 1. The most recent count on New Seaforth reflected a great trip with 29 anglers catching their limits of 290 rockfish. Productive areas have been found in a wide variety of depths ranging from 30 to 130-plus fathoms with Seaforth Sportfishing suggesting that anglers include a deepwater capable outfit that is able to fish depths to 800 feet (133+ fathoms) in the tackle that they bring.

Anglers need to keep in mind that the annual two-month rockfish/groundfish closure went into effect on Jan. 1. The closure will run through Feb. 28 and during the two-month closure period anglers will need to travel into Mexican waters if they want to fish for the various rockfish or groundfish species that are covered by the closure. During the closure period, skippers fishing in U.S. waters will be focusing on species that are not covered by the closure such as calico bass, sand bass, sculpin, halibut, yellowtail, and white seabass. Another reminder is to make sure you get your 2022 California fishing license before venturing out to do some fishing in U.S. and California waters.

Much of the fishing along the San Diego County coast during the cold-water months are targeting the calico bass, sand bass, and sculpin which is more often than not done at hard bottom and structure spots. The Imperial Beach Pipeline was a good spot over New Years’ weekend and produced a nice mix of sand bass, calico bass, sculpin, and perch. Other productive hard bottom and structure spots that have been producing a mixed bag of fish are the hard bottom to the southeast of the Whistler Buoy at Point Loma, the hard bottom to the northwest of Buoy #3 at Point Loma, the Lighthouse Ridge off the Point Loma Lighthouse, the Jetty Kelp hard bottom outside of Mission Bay, the Variety Kelp hard bottom off Pacific Beach, the Anderson and Buccaneer Pipelines, the artificial reefs outside of Oceanside Harbor and Box Canyon.

Yellowtail showings are inconsistent but if you are in the right spot at the right time on the right day there is a chance at seeing some breaking yellowtail or metering some yellowtail below the surface and having a shot at a nice-sized fish. For instance, the showings of yellowtail were sparse over New Years weekend but the fish are showing better today as this report is being prepared with several nice-sized yellowtail and a nice-sized white seabass being caught by private boaters that have been fishing off Pacific Beach and the upper end of La Jolla.

The best chance at yellowtail has been to be able to cast surface iron to breaking fish before they sound. Also productive has been to drop yo-yo iron to meter marks. Live mackerel and sardines have also produced occasional yellowtail bites when either flylined or fished on a dropper loop rig. A recent report from a skipper drifting and fishing for bass and sculpin over hard bottom off Pacific Beach was that they hooked a yellowtail on a flylined live bait that was fished by a rod sitting in the rod holder.

The 2022 fishing season is here and there is already good fun fishing to be found! Let’s hope the 2022 fishing season proves to be a good one!  I hope you can get out on the water and enjoy some of the fun fishing that January has to offer! Watch the marine weather forecast closely and choose the good weather days to do your fishing. Keep on fishing and I hope to see you out on the water sometime soon!