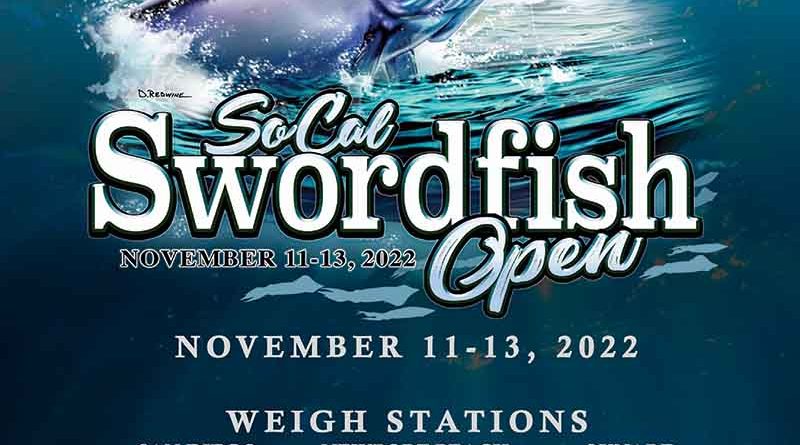 SAN DIEGO— The 2022 IGFA SoCal Swordfish Open will take place Nov. 11-13 during prime swordfish season. This will be the second year of the tournament. The tournament is open to the public and will include three tournament weigh stations: San Diego- San Diego Marlin Club, Newport Beach- Balboa Angling Club, and Oxnard- Pacific Corinthian Yacht Club.

“There will be IGFA Representatives/Tournament Officials at each of the weigh stations.,” said Marketing Director and Chief of Staff for the International Game and Fish Association, Jack Vitek, in an email from Aug. 23. “They will collect the information on the weight of the fish, the angler, the boat, etc. And they will also collect the terminal tackle (hook, leader, line sample) and bring that back to tournament HQ in Newport Beach. The information will be relayed to tournament HQ by the tournament officials at each of the weigh stations.”

The fishing boundary for the IGFA SoCal Swordfish Open is a 115-nautical-mile radius from Newport Beach (Newport Bell Buoy). Boats are not required to check out with the tournament committee upon departure from their respective ports. Tournament boats may depart from any port. Once entering tournament boundaries during fishing hours, boats must remain within the boundaries until “lines out” unless the departure is approved by a Committee Boat.

“We chose this method so that it includes all of Southern California, and the areas where swordfish are targeted,” said Vitek. “If we did just one location (Newport, for example), we would not get participation from the San Diego anglers, and same for those anglers up north. Definitely not a “conventional” approach to a fishing tournament, but we have seen this model in other locations around the world, and it worked well for us last year.”

The registration fee covers your tournament angler bag, food, and beverages at the annual awards ceremony on Nov. 13. Individual tickets to the award ceremony are available for $75.

The tournament bag included in the ticket price will contain custom shirts from AFTCO with the attached tournament artwork, custom AFTCO hats with tournament info, custom YETI ramblers with the tournament info, rum supplied by Flor De Cana, and a variety of other small items. The bags themselves will be customized with an IGFA swordfish logo. Additionally, each team will receive two free, pre-rigged squid.

The awards ceremony will include appetizers, an open bar, and a full buffet-style lunch. There is no formal entertainment. However, there will be music accompanied by video footage playing from the tournament and then, of course, the awards presentation.

“There will be six awards given out during the tournament,” said Vitek. “First, second, and third place in the “Team Category,” which will be based on the total number of points accumulated by each team (includes released fish and weighed fish). There is also the “Biggest Fish” category, which will have first, second, and third place trophies awarded to the individual anglers that caught the top three biggest fish. The awards will consist of custom swordfish trophies from renowned wildlife sculptor John Kobald, as well as other items such as YETI coolers, gaffs, framed artwork, and a swordfish mount for the biggest fish caught.”

Anglers and teams are responsible for chartering or providing their own boats for the tournament. Teams can have a maximum of four anglers each.

Nov. 8: Virtual Captain’s & Rules Meeting 6-7 p.m. The time of the meeting and a link to the Zoom call will be provided to all registered teams and participants.

Nov. 13: Awards ceremony at the Dana Point Yacht Club from 12-4 p.m. Individual tickets to the award ceremony can be purchased at https://one.bidpal.net/socal21/ticketing.

To register online, please visit https://igfa.org/event/the-2022-igfa-socal-swordfish-open/. For any questions on registration, contact IGFA at 954-927-2628 or email events@igfa.org.