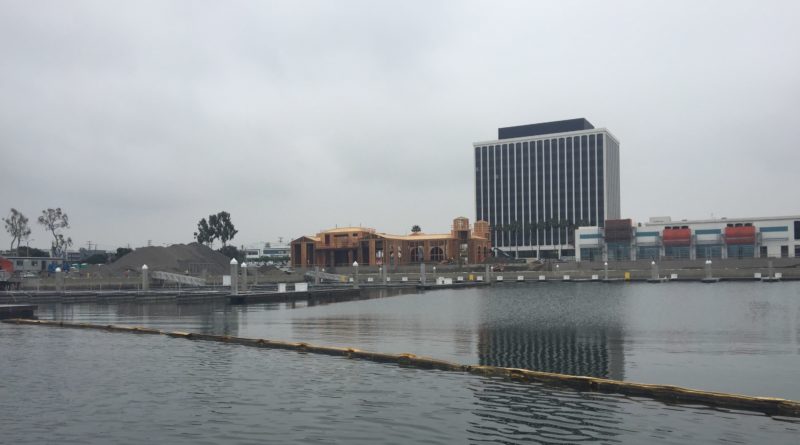 Marina del Rey has more than a few waterfront additions coming within the next few years, including Pier 44, new boater amenities, and more.

MARINA DEL REY—Marina del Rey has a reputation as one of the more upscale boater’s havens in Southern California – and the developments going up in the community certainly reflect that theme. Los Angeles County owns the land, and, similar to how Orange County signed a lease agreement with private developers for Dana Point Harbor’s redevelopment back in October, the governing body here leases its parcels. We’ve indeed witnessed an increase in projects near Marina del Rey’s harbor, what with land leases expiring and becoming available.

The Log was given a private harbor tour on one of the new Quick 32 harbor patrol boats. Just in case you want to learn more about Quick 32 and its captain, Kiva Osby, visit the link at vimeo.com/336876600. Michael Tripp (planning division chief for Los Angeles County Beaches & Harbors), Nicole Mooradian (Public Information Officer for Los Angeles County Beaches & Harbors) and Kat Jacob (Communication Manager for Marina del Rey Convention & Visitors Bureau) were aboard to provide insight.

As we floated through the harbor, there were some great reminders of Marina del Rey’s boating history, such as a recently renovated Marine del Rey Hotel and the floating homes, some of which were grandfathered into policy to stay even after they were deemed unseaworthy in the 1990s. On the other hand, there were many new projects in the process of being built, blending the old with the new.

This article is just a brief rundown of what’s happening in terms of new development and what visitors can expect to see finished over the next couple of years.

Anyone who visits Marina del Rey will not be able to ignore the construction that will eventually become Marina del Rey Promenade. Just a few of the new amenities will be dinghy docks, new boater restrooms,  meeting rooms, West Marine and a brand new pumpout station. This project is estimated to be completed by February 2020.

Another project that took some years to come to fruition is the Trader Joe’s, the first of the Pier 44 retail stores, near the sea – and it’s finally open! A spacious 13,000-square-foot store with little tributes to Marina del Rey, like rowing club oars and other touches, this location will also have dinghy docks installed in the near future to cater to boaters. Trader Joe’s is walking distance to some of Marina del Rey’s attractions, including Burton Chace Park, and provides an affordable option for boaters who wish to dine on the water/picnic in the park.

Jacob said if you looked at a before and after photo of The Boathouse, it’s impressive how far the once dilapidated building has come. After being completely transformed, the new building is preparing to open to the public – possibly as soon as this summer. Near Burton Chace Park, The Boathouse is anticipated to be one of Marina del Rey’s favorite gathering spots for weddings, meetings and more. There are also park benches located near the building to enjoy picnics.

The boat launch nearby and public parking lots are also on the list to receive an update.

Mooradian stated she and her colleagues spent a year in a trailer while the new visitor’s center was being completed. However, now it’s finished and one of the nicest places, especially for visitors, near the harbor. With a wide selection of free guides and more (a copy of The Log can be picked up here), it’s very handy for anyone who wishes to learn more about Marina del Rey’s many events and activities. In fact, the visitor’s center is where most of the behind the scenes magic happens. Planning for music festivals and contests such as the Can The Trash! Poster Contest begins here.

Located in a close proximity to Burton Chace Park, the Visitors Center is located at 4701 Admiralty Way.

Since 1969, Fisherman’s Village quaint New-England-inspired seaside gem has been entertaining guests. For the last decade, it has been looking for a facelift. The process has been a little slow, however, and Tripp states that no new design paperwork has been shared since 2008. In Tripp’s view, something new could come down the pipeline anytime – it could be tomorrow or it could be a year from tomorrow. The Small Craft Harbor Commission meetings have an update section each month for those who wish to get the first dish.

In the meantime, guests can enjoy the many fun things to do from grabbing brunch at Whiskey Red’s to the free summer concert series.

All over Southern California affordability is an issue, but Mooradian mentioned Marina del Rey’s leadership is taking affordable housing seriously. In Mariner’s Village, for instance, 20 percent affordable housing will be offered as this classic complex is updated.

There are many apartment buildings being built and updated near the harbor, which include Neptune Marina, Esprit, Aqua, ALMI and many more. These apartments would be perfect location for boaters who have the funds to rent these luxurious abodes.

Why do waterfront developments take so long?

Marina del Rey certainly has many new hotels, retail spots and more in the pipelines as far as developments go, but some might wonder why it takes so long to get these projects off the ground. Tripp shared his opinion that developing land along the coast is “expensive and complicated.”

“Sometimes obtaining an EIR [Environmental Impact Report] can take 10 years,” stated Tripp. In order to develop properties correctly, with permitting and standards set out by a Local Coastal Plan, sometimes it will take a lot longer.

Tripp also stated sometimes buildings could go up quicker than normal. He stated there was a running joke between two apartment developers who were in a race to finish before the other. Surprisingly, the developer who began construction after the other appeared to have more progress. Tripp also said more often than not, because of the process, construction times will end up finishing after the estimated date.

To learn more about Marina del Rey browse visitmarinadelrey.com. Stay up to date about waterfront projects in more through Los Angeles County Beaches & Harbors at beaches.lacounty.gov.