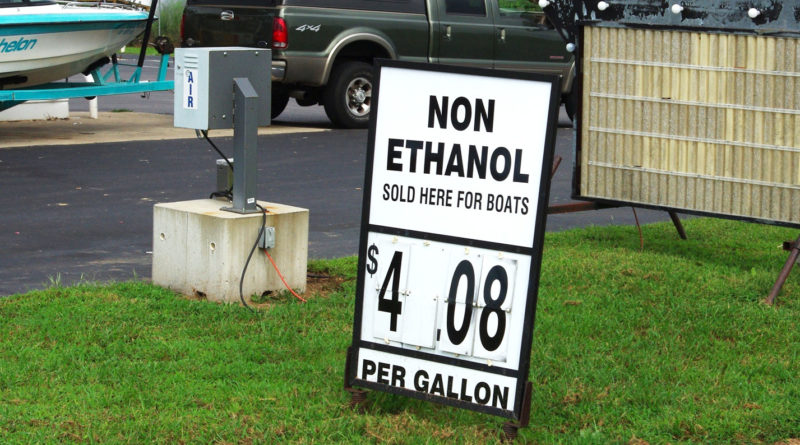 WASHINGTON, D.C. — Ethanol-blended fuels could become extinct from the engines of recreational boats if two advocacy groups are successful in their joint campaign to modify the Renewable Fuel Standard (RFS).

Representatives from the American Petroleum Institute (API) and National Marine Manufacturers Association (NMMA) announced during a press conference held May 20 their respective groups will urge federal leaders to ease government mandates of ethanol-blended fuels and instead head an increasing demand for non-ethanol gasoline.

Bob Greco, the downstream group director for API, said RFS in its current iteration no longer serves its original purpose and needs to be tweaked in order to keep up with modern times.

“The law started off with the best of intentions, but the program is now unworkable,” Greco said. “We faced a far different energy outlook back in 2007, when Congress enacted the RFS. Back then, projections showed the U.S. would consume more fuel each year. We thought our domestic production would decline.”

About eight years later, Greco said engines running ethanol-blended gasoline have lower fuel efficiency than boats or vehicles using a non-ethanol counterpart. He added the demand for gasoline with ethanol blends has been decreasing.

Nicole Vasilaros, NMMA’s vice president of public policy, said warranties could be voided on any vehicle using E15 gasoline. Many boaters, she added, have already started to switch to non-ethanol fuels, but the availability of “E0” is threatened.

“Congress had good intentions when it created the Renewable Fuel Standard, but the unintended costs are too high and it is time for reform,” Vasilaros said, adding NMMA has been testing biobutanol blends and, so far, proved to be more compatible with boating engines than ethanol-based fuels.

However, until federal leaders update RFS, biobutanol cannot be fully tested nor implemented.

According to the U.S. Department of Energy’s Alternative Fuels Data Center, biobutanol is an industrial solvent and can be blended with gasoline for transportation fuel. Its reported benefits include high energy content, lower vapor pressure and fewer emissions.

The Ohio State University is collaborating with University of Alabama and Green Biologics to develop, according to Green Car Congress, “a cellulosic butanol production process with high productivities, yields, and carbon conversion.” A $1.2 million Department of Energy grant is funding the collaboration.

A limited number of recreational boats are considered E10-compatible (gasoline blended with 10 percent ethanol), according to the U.S. Coast Guard. Specifically, marine engines built before 1990 could operate with a tank full of E10 gasoline. However, Coast Guard officials said boaters should avoid using E15 fuels since there is no conclusive date to show gasoline with 15 percent ethanol is compatible with marine engines. The Coast Guard warns boaters to not use an E85 blend in their respective boats.

“Gasoline consumption is down 12 percent from what the government projected it would be in 2015. We’re also in the midst of an energy renaissance that has made the United States more secure as a nation. Despite these drastic changes in our global energy position, the RFS remains stuck in the past,” Greco said.

Under the current paradigm, federal regulations would require a higher proportion of ethanol to be blended with smaller amounts of gasoline.

“This year we could hit what is called the ethanol blend wall, where the RFS would force more than 10 percent ethanol into each gallon of gas. This is concerning because most cars on the road today cannot tolerate these higher ethanol blends,” Greco said. “Engines and fuel systems just were not designed for fuel with higher than 10 percent ethanol.”

EPA officials released its proposed RFS requirements three days ahead of its June 1 renewal deadline. Oil refineries and gas companies have been waiting for the RFS requirements to be approved in order to release their usage data for 2013.

Refineries could be required to blend about 17.4 billion gallons of renewable fuels by 2016, according to the EPA proposal. Advanced biofuels, such as cellulosic ethanol, would account for about 20 percent of the proposed requirement.

“[The EPA’s] announcement makes abundantly clear that the only solution is for Congress to repeal or significantly reform the RFS. Members on both sides of the aisle agree this program is a failure, and we are stepping up our call for Congress to act,” Gerard stated.

RFA President and CEO Bob Dinneen wrote a letter to EPA’s Office of General Counsel on May 20, urging the federal agency to establish a deadline for fuel volume levels and abandon its now-suspended blend-wall methodology.

RFS-prescribed fuel volumes for 2014, 2015 and 2016 have not yet been established. Dinneen said the blend-wall methodology rewarded refineries for not producing cleaner fuels.