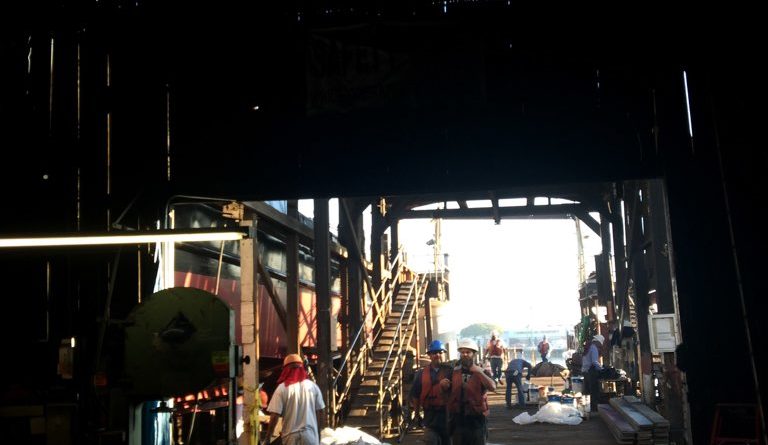 A historic commercial boatyard business with more than 100 years of service, Al Larson Boat Shop is an impressive landmark in San Pedro.

SAN PEDRO — Al Larson Boat Shop is a marvel to behold. Located on Terminal Island in San Pedro, this shop is not open to the public, but has a very important history in the Long Beach and San Pedro boatyards. In California, with relatively newer infrastructure in comparison to the rest of the world, Al Larson Boat Shop has existed for 115 years. Portions of the establishment installed in 1923 still remain standing today.

Peter Adolph “Al” Larson was a Swedish boat builder who arrived in San Pedro via his shipwright’s apprenticeship in San Francisco seizing the opportunity to invest in the growing fishing industry.

“If you visit a yacht yard, you can see how truly different a commercial boatyard is,” owner Jack Wall told The Log. Wall’s father, Andy who followed in his father’s love for the sea, bought Al Larson Boat Shop from Larson’s son back in 1959 and it has been a family-owned business since.

Looking around the boatyard, there is a constant reminder that the industries operating large vessels were part of a job boost in California and there used to be plenty of workers arriving at the berths – in fact, it still is with a large number of individuals being employed in the shipping industry in San Pedro.

When the post-World War II economy was booming during the 1950s, the port was home to quite a few jobs but there was no shortage of change, what with multiple recessions and a shifting economy.

As the port evolved, so did Al Larson’s relationship with those associated with one of the largest trade centers in the world.

Linda Shaffer, the secretary who’s worked at Al Larson for more than 30 years, said the port’s other boatyards shared a proximity to the boat shop.

“We used to be like family,” she said. “Well, now you can see that has changed. You can see all the containers.”

Most employees have been here for a long time. “I’ve been here the longest. I started young,” Shaffer, told The Log.

Stability can be attested to as one employee named Alan who resides in Westminster and works at the entrance.

From the sheer number of boats being repaired, it becomes evidently apparent just how important California’s coast is to business owners, profit-makers, entertainers, the military, traders, and a whole slew of others who have used the waterways to transport currency in a sense. Standing before Al Larson’s, one sees how essential the commercial boating world has been to the coast’s economy.

Holding even with more than 100 employees, Wall stated, “We have carpenters, painters, and electricians – just about the whole spectrum to work on these ships.”

There are also the impressive stages the boats go through to be repaired, including the massive dry docks that happen to be empty when The Log arrived. Wall’s particular fondness for this massive system can be seen; he has a photo of the dry docks holding a ship as his screensaver on his computer. The dry docks are waiting for the next ship to begin work.

A Slice of [Hollywood] History

In many ways, Al Larson’s compares to a maritime museum. Just from a short visit, you can count the historical sites from the well-known ships being repaired to the original dock buildings that haven’t changed much at all since 1923 when they were originally built. Wall also shows me an old derelict building that has been cited as a history building by the city; Al Larson’s doesn’t occupy it, but they don’t tear it down either. The fate of it is still in limbo.

“Directors just love to film here,” Wall, who begins to list off a number of television shows and movies that have been filmed in the vicinity from “24” to the popular final episode of “Sons of Anarchy,” said.

There is a great chance most anyone who has ridden on a cruise ship, ferry, or tour boat out of Newport Beach or other areas in Orange County or Los Angeles County has ridden on a boat that at one time or another has been repaired at Al Larson. With a wide clientele, Al Larson fixes most everything from boats at Hornblower’s including the late John Wayne’s boat, Wild Goose, to naval fleets, barges, tugboats, and more. Al Larson’s is making repairs on boats from all kinds of clientele.

At one time, recreational yachts were fixed at Al Larson, but over the years that was phased out. “We concentrate on boats starting at 60-feet and move beyond that,” Wall stated. As one of the few notable commercial boatyards between San Diego and San Francisco, it makes sense to focus on the aspect of business where there is not as much competition.

For the past 40 years, Al Larson’s has run lease-free. Wall explains that means they have a kind of 90-day lease and it’s a complicated matter.

“If you want to know more about that,” Wall frankly stated, “you can contact the city and ask them.”

While the history may be the main selling point, it’s notable to mention that in 2017 Port of Los Angeles, which is in close proximity to Al Larson Boat Shop, broke the all-time record for cargo volume at 9,343,192 20-Foot Equivalent Units.

The Port of Los Angeles, in its 110-year history, has thrived off of its global maritime movement. When your business is navigating cargo through the waterways – be it supplies, products or passengers – it is fair to say there is also a high demand for repairing the vessels carrying the cargo. Al Larson Boat Shop has met such a demand longer than the port has existed.