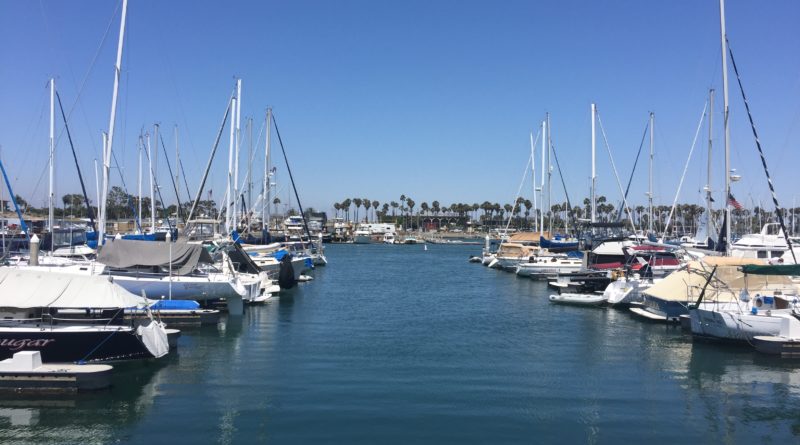 The heart of the issue is whether the trees along Marina Drive, which serves as a nesting ground for the great blue heron, should be relocated during nesting season. Coastal Commission staff already acknowledged violations of the Coastal Act have occurred in the Alamitos Bay Marina area. One of the violations: the unpermitted removal of 22 palm trees. The palm trees, according to Coastal Commission staff, “were documented to have supported great blue heron nesting.”

Redevelopment work is taking place along Marina Drive as part of CenterCal’s 2nd and PCH project, a commercial shopping plaza across the street from Alamitos Bay Marina.

Joshua Hickman, a staff member with Long Beach’s Public Works Department, said the stretch of Marina Drive between Studebaker and 2nd Street lacked sidewalks, protection for bicyclists or a crosswalk. A proposed complete streets project would bring those missing elements to Marina Drive – though a few trees would have to be relocated along the way

Thirty of 193 trees in the area needed to be relocated for safety and public access, but will remain somewhere on site. There were 22 trees removed but those would be replaced. The city would also add 23 canopy trees. In all there will be 238 total trees once the project is complete.

“This really is a public access improvement project,” Coastal Commission staff stated. “It’s going to provide for sidewalks and pedestrian improvements in an area where currently, none exists.”

California’s Coastal Act considers the stretch of Marina Drive adjacent to Alamitos Bay Drive as “major vegetation,” due to the area’s habitat for the Alamitos Marina heron colony.

“Suitable heron nesting sites, which play an important role in breeding, are scarce in southern California and at least seven active heron nests had been located in trees that were removed. The trees located at the proposed project site provide biologically significant habitat for the Alamitos Marina heron colony,” Coastal Commission staff stated in a report to commissioners.

A group known as Citizens About Responsible Planning (CAPR) challenged Long Beach’s improvement project along Marina Drive and filed an appeal in January. Members of CARP, according to Coastal Commission staff, stated they had concerns about “the project’s consistency with the general coastal resource protection and public access goals of the certified [Local Coastal Program].”

“The appellants contended that any movement of existing mature trees was unnecessary and would adversely impact the trees themselves and birds, including great blue herons, using the trees as habitat,” Coastal Commission staff stated in it report to commissioners.

The commission found “substantial issue” existed at the project site, due to “adverse impacts of the city-approved work on nesting birds and tree species composition.”

Long Beach had since agreed to make some concessions in order to gain the commission’s approval and move the project forward.

“The city of Long Beach … worked with commission staff to revise the project to reduce the number of trees proposed to be relocated, add additional canopy trees, and use an assortment of native, low-water use canopy trees,” commission staff stated. “Additionally, the city has agreed to construct development in a manner that will avoid impacts to nesting birds, adhere to tree trimming and relocation best practices, and ensure successful establishment of coastal habitat that can continue to support shore birds and other biological resources.”

California Coastal Commission held its May meetings in Oxnard.