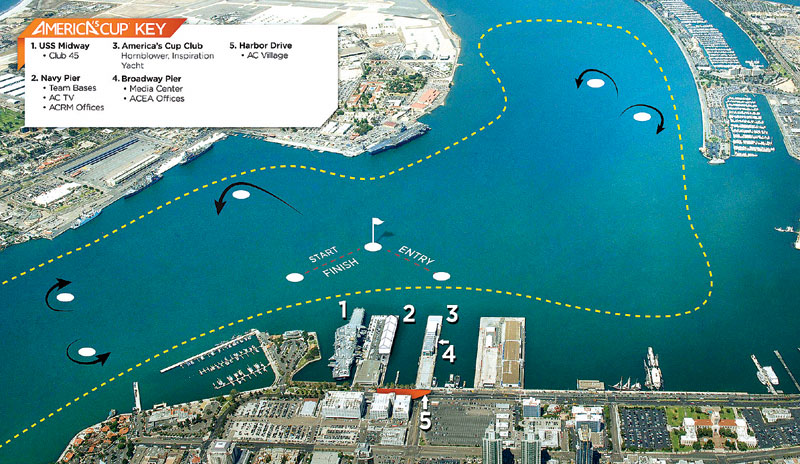 SAN DIEGO — Boaters curious about what to expect at the 2013 America’s Cup races in San Francisco can see a sample of the action to come on San Diego Bay, Nov. 12-20, when the third leg of the America’s Cup World Series brings world-class sailing to San Diego.

Some of the world’s top sailors will be competing in both fleet and match racing around the bay in AC45 wing-sailed catamarans — a smaller version of the AC72 catamarans that will be used in the upcoming America’s Cup.

The race courses and management are designed to bring the sailing action up-close for all to watch and enjoy from San Diego’s shoreline — on Harbor Island or at the recently constructed America’s Cup Village and Pit Row on Broadway Pier and Navy Pier.

For boaters looking to anchor and watch the action from the water, the Coast Guard issued a safety zone that is designed to protect the public and race participants during the America’s Cup World Series races. The zone covers most of the waters from the Marriott Marina to the northern end of Harbor Island.

“San Diego Bay is a prime location for this series because the boats race closer to the shore than just about anywhere else,” said Scott Peters, chairman of the San Diego Board of Port Commissioners. “The area of San Diego Bay where the races will take place is located in the heart of San Diego, in downtown. Downtown has more than 100,000 residents and workers — and many of them will be able to just walk down to the waterfront to observe the races close up.”

Racing begins with the Port Cities Challenge, Nov. 12-13 — an event supported by the mayors of Chula Vista, Coronado, Imperial Beach, National City and San Diego. The preliminary showdown will allow competitors to get a feel for the venue and fine-tune their speed.

The weekend will culminate on Sunday afternoon with the awarding of the Port Cities Challenge Trophy to the winning team, by one of the port city mayors. In addition to the racing, the America’s Cup Village will be open from 10 a.m.-6 p.m., offering a wide range of food and beverages, and interactive activities.

After two “off days,” the San Diego Match Racing Championship will begin Nov. 16, with three days of racing leading into the final championship. The highlight of the event is the Nov. 19 and 20, when the teams will compete for America’s Cup World Series San Diego match race and fleet race championships, as well as for the chance to put points on the board for an overall 2011-12 America’s Cup World Series win.

“We’re really excited about the San Diego event,” said skipper Terry Hutchinson, of Sweden’s Artemis Racing. “As an American, having a chance to race in the U.S. is always something I look forward to.

“Having the race course inside San Diego Bay gives us the opportunity to show what we do to more people than ever before, so that’s also a big bonus — and for Artemis Racing, this is another chance for us to hone our skills against top competition as we work toward the America’s Cup in 2013,” Hutchinson said.

Oracle Racing, San Francisco-based winner of the 33rd America’s Cup and current Cup Defender, is returning to its “second home,” as the team spent 16 months in San Diego from August 2009 to December 2010 — training and preparing the 90-foot trimaran USA-17 that ended up beating the 90-foot catamaran Alinghi 5 in the last America’s Cup.