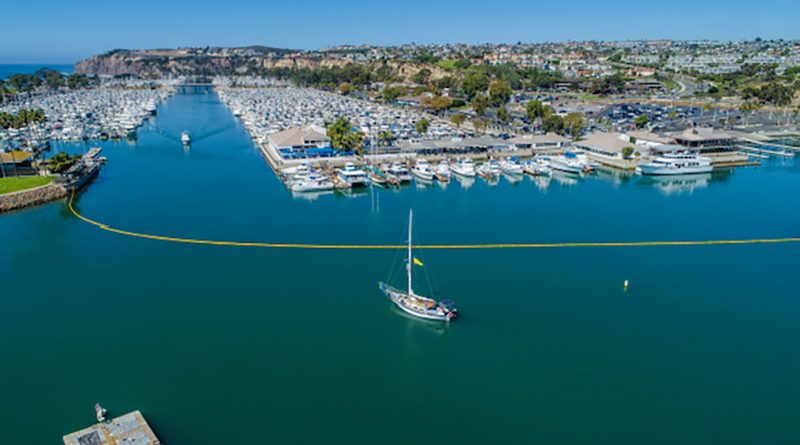 Dana Point Harbor was blocked off using a containment boom, and movement out of the harbor was prohibited until Oct. 8, 2021, affecting local businesses. Photo Provided by Dana Wharf Sportfishing

Almost a year after the Orange County Oil Spill closed beaches and fisheries up and down the Orange County coast, Amplify Energy, and its subsidiaries pled guilty on Sept. 8 to violations of the federal Clean Water Act.

Under the plea deal, the companies will pay a $7.1 million fine and a reimbursement of $5.8 million to federal programs impacted by the spill. The companies will also spend four years on probation and must make operational changes, including improved training, installation of a new leak-detection system, and meeting notification requirements, according to the U.S. Attorney’s Office.

On Oct. 2, 2021, a 13-square-mile oil slick was reported three miles off the coast of Newport Beach, resulting from a crack in an underwater pipeline connected to platform Elly.

The pipeline was compromised on Oct. 1 after a cargo ship allegedly dragged its anchor across the pipeline, causing the crack. Before the oil spill was reported, 25,000 gallons of crude oil had been released into the ocean.

The California Department of Fish and Wildlife closed fisheries from Huntington beach to Dana Point, and the Office of Environmental Health Hazard Assessment determined that fishing in the affected area was a risk to public health and prohibited the harvesting of shellfish and fish within six miles of shore. The closure on fisheries was lifted on Nov. 30, 2021.

“The substantial financial penalties and compliance measures required by the plea agreements demonstrate the federal government’s resolve to punish any entity that causes environmental damage,” Acting U.S. Attorney Stephanie S. Christensen said in a statement last month announcing the plea deal. “This oil spill affected numerous people, businesses, and organizations who use the Southern California coastal waters. The companies involved are now accepting their responsibility for criminal conduct and are required to make significant improvements that will help prevent future oil spills.”