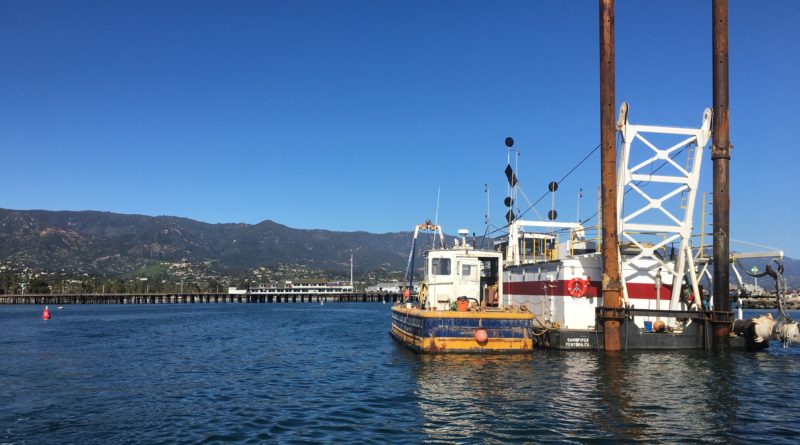 Maintenance project is on tap yet again as federal agency reviews feedback of Supplemental Environmental Assessment.

SANTA BARBARA—The U.S. Army Corps of Engineers (Los Angeles District) is preparing for its next dredging project at Santa Barbara Harbor, but not before the agency reviews feedback it received from governmental agencies and the public during a one-week long open comment period.

The open comment period was held between Oct. 11 and 18, with governmental agencies of all levels and the public at-large invited to provide comments on a Supplemental Environmental Assessment for Santa Barbara Harbor.

Dredging at Santa Barbara Harbor is performed twice per year, usually in early spring and late fall, according to the U.S. Army Corps of Engineers.

“The annual average volume of dredged material is approximately 342,000 cubic yards. The dredged material is suitable for beach replenishment and is placed down coast of the harbor within the East Beach placement area,” U.S. Army Corps of Engineers staff said in a released statement.

The federal government started its annual dredging of Santa Barbara Harbor in 1972, but shoaling and sediment collection at the bottom of the harbor can be traced back to the late 1920s.

“In 1927-28 local interests constructed, at their own expense, a 1,800-foot long, detached breakwater parallel to and about 600 feet from the shore. The breakwater afforded protection from southwesterly waves for Stearns Wharf and a mooring area for small boats and yachts,” a section of the 2016 Environmental Assessment document stated. “One effect of this structure, however, was to interrupt the natural flow of easterly directed wave energy along the coast, which caused deposition of sand in the lee of the breakwater.”

The breakwater was extended in 1930 to deal with the navigational difficulties caused by the shoaling at the harbor’s west end, but the problems didn’t end there.

“The effect of the extension, in turn, was to impound the eastward flowing sediment completely until the trapping area was filled. By 1933-34 this accumulated sand had advanced far enough seaward to migrate along the south face of the breakwater, and was deposited in the lee of the eastern It was decided, in the 1950s, to allow a portion of the sand spit, which formed at the tip of the breakwater, to remain in place to protect the harbor from southeasterly storms.

The city of Santa Barbara extended the breakwater in August 1985 by 240 feet.

“The harbor entrance channel has continued to develop shoal areas that severely restrict and endanger navigation,” according to the 2016 Environmental Assessment.

“The dredged material is suitable for beach replenishment and is placed down coast of the harbor within the East Beach placement area,” U.S. Army Corps of Engineers staff stated.