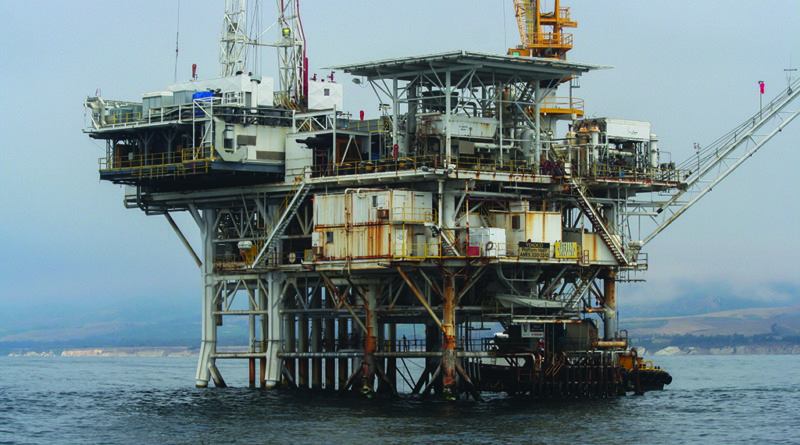 This is the second story in a series about artificial reefs in Southern California, looking at the ecological, environmental and user impacts of these manmade structures.

SOUTHERN CALIFORNIA—In the underwater world, reefs are the Los Angeles or New York City of the U.S. – dense in population and diversity.

Reefs are the preferred living space for many sportfish, such as bass, rockfish and sheephead, providing nooks and crannies for shelter and plenty of food sources. In areas lacking these natural reefs, such as the Southern California bight, artificial reefs, for various reasons, have been used to imitate these rocky structures.

A few reefs have been put in near-shore areas by the California Department of Fish and Wildlife (CDFW) to enhance sportfishing, while others were mandated for mitigation reasons, such as the Wheeler North Reef. The California Coastal Commission ordered the reef to be created to restore marine life damaged by the San Onofre Nuclear Generating Station (SONGS).

Meanwhile, other artificial reefs were not planned. California’s 27 offshore oil and gas platforms – most in Orange and Santa Barbara counties – provided the right surface and material to attract sportfish, kelp and other organisms, with some spanning as much as two city blocks near the seafloor.

While the CDFW, the lead agency for the state’s artificial reefs, works to update its management plan for reefs already in place, federal and state officials and stakeholders continue a decades old debate about the future of oil platform reefs.

State and federal laws require that a platform be decommissioned at the end of its hydrocarbon production life and be totally removed. In 2010, California passed Assembly Bill 2503, allowing for decommissioned oil rigs to be turned into reefs, by cutting off the top portion and allowing the rest to remain. According to the Bureau of Safety and Environmental Enforcement (BSEE), five platforms in federal waters are in the beginning stages of the decommissioning process. At least two platforms in state waters are in the process of being decommissioned.

Donna Schroeder, a Marine Ecologist for the Bureau of Ocean Energy Management (BOEM), Pacific Region, said the science box about the environmental and ecological impacts of these massive structures has been checked, providing the information to inform decision makers.

Schroeder has been involved in researching oil platform reefs with BOEM, which has funded studies to help the decision maker, BSEE, the lead federal regulation agency in the decommissioning of oil platforms.

“What is not controversial is some [artificial] reefs have a lot of fish and marine life around them,” Schroeder said.

A 2014 study conducted by  Jeremy Claissea, Daniel Pondella, Milton Love, Laurel Zahn, Chelsea Williams, Jonathan Williams, and Ann Bull (Oil platforms off California are among the most productive marine fish habitats globally), found oil and gas platforms off the coast of California have the highest secondary fish production per unit area of seafloor of any marine habitat that has been studied.

“The mean annual Total Production per square meter of seafloor for complete platforms was significantly greater than, and 27.4 times as much as is produced per square meter on natural rocky reefs located at similar depths in the study region,” the study stated.

A similar study comparing several sportfish populations on CDFW reefs to the same sportfish on nearby natural reefs, drew the conclusion “fish living on artificial reefs generally fare as well or better than those on natural reefs,” the study stated.

Another 2009 study by Christopher G. Lowe, Kim M. Anthony, Erica T. Jarvis, Lyall F. Bellquist & Milton S. Love (Site Fidelity and Movement Patterns of Groundfish Associated with Offshore Petroleum Platforms in the Santa Barbara Channel, Marine and Coastal Fisheries) looked at 100 platform-associated fish representing 15 species at three offshore platforms in the Santa Barbara Channel to investigate the tendency of the fish to return to the platforms. The study concluded fish appear to be using platforms in a manner similar to that of fish found on natural reefs.

“In fact, some species such as widow rockfish and lingcod may show higher site fidelity to platform habitat than natural habitat,” the report stated.

However, it does not come without tradeoff. Since manmade reefs change the habitat, the marine life that prefer the former flat sandy or muddy floor – such as flat fish – are displaced by an artificial reef.

“Those species generally can be on the shell mount or the edges and they can feed on some of the material like the different worms and productivity,” Schroeder said. “I can’t say they are excluded but the habitat does change and that is a tradeoff.”

It comes down to priority.

“This is where values come in, people value rocky habitats so much more,” Schroeder said.

“The whole ocean is a habitat so it makes it a fine line,” said Brown, who has been involved in the discussion over rigs to reefs in California since the near beginning of the debate.

Most of the environmental concerns surround oil platforms specifically, one of the main concerns being toxic materials.

“One question is are the fish in a toxic environment? Do they have different levels of toxins if they live around a platform compared to a natural reef?” Schroeder said.

According to the study, concentrations of hydroxylated PAHs (some of the most important contaminant classes related to oil operations according to Schroeder) in all samples – 76 fish from platforms and 64 fish from natural sites – were low, ranging from less than the limits of detection.

Toxic chemicals can also be a concern for manmade reefs from other materials such as shipwrecks, car tires and car bodies. Orange County Coastkeeper advocated for the reconsideration of the U.S. Maritime Administration (MARAD) guidelines for vessels eligible for sinking due to concerns of containments leaking into the water such oil and fuel, asbestos, polychlorinated biphenyls (PCBs), antifouling paint and heavy metals.

For Brown, another environmental concern is drawing a fine line between an artificial reef and ocean debris.

“A lot of people are willing to call whatever you can put in the water a reef,” Brown said. “At what point do you stop and that was always a concern for us.”

CDFW does have regulations in place to mitigate this issue.

When it comes to decommissioning platforms, another variable is the carbon footprint of removing the massive structures.

“By taking these things are you creating a bigger environmental nightmare than leaving them in,” Brown said.

There are also groups, including the Environmental Defense Center, an environmental protection organization based in Santa Barbara, who are concerned about toxic contamination from leaving the structures partially in place, and liability for the state to deal with future accidents or mitigation efforts. Another concern is the money the oil and gas industry will save through partial removal instead of complete removal.

“Environmental groups are very concerned that as the industry looks at cost savings… that could affect their interest in further leasing and development of the coast,” Linda Krop, the Chief Counsel for the Environmental Defense Center, said at the Offshore Oil Platform Decommissioning Forum for the Public at the Aquarium of the Pacific on Jan. 12.

A general consensus has been the decision should be based on the best science.

Another major consideration in the debate has been the user effect.

“If the question is, is it ecologically or environmentally beneficial, I think we have a pretty solid scientific answer to that but what is still kind of up in the air is how you want to prioritize the different values,” Schroeder said.

The stakeholders – anglers, boaters, divers, environmentalists, oil companies and Southern California residents – are as many as the opinions. Many recreational anglers support artificial reefs, including rigs to reefs.

“They’re like an oasis out there in a land of sand,” said Coastal Conservation Association California (CCA Cal) board member Merit McCrea.

CCA Cal is a vocal supporter of artificial reefs.

On the other hand, commercial anglers are among those who might be negatively impacted by the reef, as they prevent trawling.

Members of Commercial Fishermen of Santa Barbara (CFSB), a 501(c)(3) organization, have been involved in the discussion, as a major stakeholder in Santa Barbara waters where several of the oil platforms stand.

“Our position focuses on taking a case by case look for each rig and considering the best net benefit to the marine ecosystem that supports our fisheries,” CFSB Board Meeting Minutes from Nov. 29, 2019 stated. “Different gear types are impacted differently by different scenarios. Also focusing on making sure our port community benefits from any fund set up with cost savings of partial decommissioning.”

Depending on how much of the structure is left in the water, there could be implications for boaters. The U.S. Coast Guard does have navigational requirements for the safety of boaters and other users, McCrea said that limit is 85 feet below the surface, buoys and markings on navigational charts would be required for reefs that don’t meet that requirement. McCrea said most of the CDFW’s reefs are not close enough to the surface to cause any problems for boaters. CDFW requirements prevent artificial reefs in navigational channels.

Each platform will be addressed individually and require a project proposal, company approval, environmental studies and a slew of agency approvals. Should a platform be approved for a reef, questions remain as to whether the area would be open to fishing or designated as a Marine Protected Area.

Brown said a third option is recycling the station for something else such as a wind farm or research facility.

“This issue has brewed for 20 years and for some people probably longer,” Brown said. “At some point it needs to be determined what we are going to do.”

Questions also remain over whether placement of artificial reefs for sportfishing will ever be picked up again.