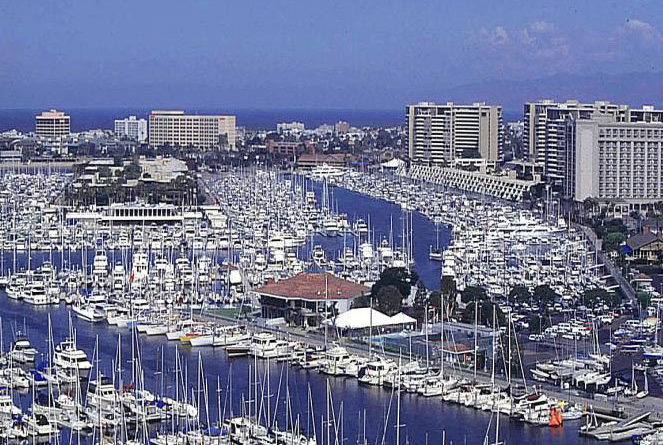 LOS ANGELES—Two Marina del Rey leases were in front of the Los Angeles County Board of Supervisors at their Oct. 15 meeting: an assignment of leasehold for Avalon Bay Marina and the extension of lease terms at Parcel 22R, which is home to Cheesecake Factory and The Foghorn Inn. Supervisors approved both items.

A recommendation to move forward with an assignment of lease for Avalon Bay Marina in Marina del Rey was adopted by the Board of Supervisors. Members of the Small Craft Harbor Commission supported the leasehold assignment at its September meeting.

The leasehold of Avalon Bay Marina, which will include 205 apartment units and 207 boat slips, will be transferred from Archstone Marina Bay to TC Marina del Rey, CG Marina del Rey and JSP Marina del Rey as part of an $86 million transaction. The existing lease will expire on June 7, 2051.

Improvements are planned for Parcel 8T, such as the development of two four-story buildings with 205 apartments and a 207-slip marina. Parcel 8T has frontage on Tahiti Way.

The county’s Department of Beaches and Harbors will received about $1.7 million as part of its proceeds from the leasehold assignment.

Will this leasehold transfer have an effect on the marina’s boaters? The answer isn’t clear. The Log will follow-up with this lease assignment in an upcoming issue and provide as much information as possible as to what it means for boaters.

County staff, however, stated, “all terms and provisions in the lease remains unchanged from this assignment.”

Supervisors voted in favor of extending the lease for Parcel 22R, which is located at 4140 Via Marina in Marina del Rey. The lease extension is for five years and is now set to expire May 31, 2027.

Parcel 22R is where Cheesecake Factory, The Foghorn Inn (a 23-room hotel), a dry cleaner and liquor store are located. The original lease was signed in 1962 between the county and Marina Properties; it was a 60-year lease term and set to expire on May 31, 2022.

“[Marina Properties] has expressed an interest in negotiating a lease term extension of up to thirty-nine years, which would bring the term to 99 years, the full amount allowed under California law,” county staff stated in a report to commissioners. “Extending the lease term to May 31, 2027 will provide county time to consider future redevelopment of Parcel 22R in conjunction with its neighboring properties to help realize Marina del Reys Vision Statement adopted … in October 2014.”